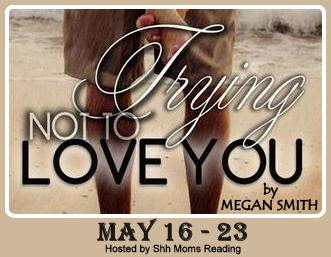 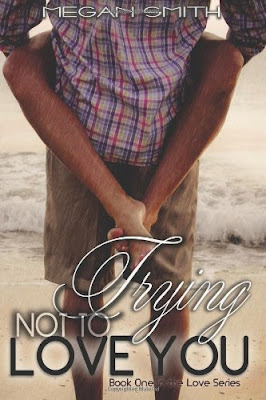 MacKenzie Cahill has dealt with overbearing and overprotective brothers her entire life, making it near impossible to enjoy her teenage years.  Having a boyfriend was practically impossible until she met a guy that wasn't afraid to stand up to them - Dominic.  He was sweet, thoughtful, and everything MacKenzie ever wanted in a man.

Her world is turned upside down after a party, and her brothers' best friend Hunter is the one there to offer her a shoulder to cry on.  The chemistry between them is electric, and feelings for each other that have been hidden for years are finally voiced.

Holy Smokes! The intensity between Kenzie and Hunter in this book will have you swooning. You will fall for Hunter hard! Megan did a fantastic job with her debut novel Trying Not to Love You! She had a lot of twist and turns in this books left my emotions in a tailspin, it was so hard to keep up with them. Trying Not To Love You will definitely keep you engaged from the very beginning till the very end leaving you wondering, “what the f***!"


MacKenzie (Kenzie) was only 10 when she walked into her kitchen and first laid eyes on 13 year old Hunter.  Just looking at those blue eyes set the butterflies in her stomach to go off, and that’s when she knew; she was in for it.

"I would remember that kiss always, my first kiss. It might not have meant anything to Hunter, but it meant the world to me.' ~ Kenzie

Kenzie had always grown up with three VERY over protective brothers. With Hunter being Mason and Cooper’s best friend (Kenzie’s older twin brothers) she now has an extra protector watching out for her. However unlike her brothers who were overbearing pricks most of the time, Hunter was always more attentive to her feelings and always made sure she was okay first before he took on any form of action. She knew she felt a connection to him from the beginning. His constant flirting with her did not make matters with her to be any easier. She wanted to be with him, but he was the one she could not have. He never showed any interest in her, or so she thought.

“You don’t need that shit. You’re beautiful just the way you are.”
~ Hunter
She thought he was good looking growing up, but seeing him home during summer break from college, he was sexier than ever. He was taller, his muscles were bigger, his hair was longer, and damn those tattoos. She wanted him, and she wanted him bad, more now than she had ever had. Hunter wanted her just as bad, but he just couldn’t do it, he chose her brothers over her and that damn well broke her heart.

She knew she couldn’t be with Hunter, so she moved on by dating Dominic. She knew in time she would become happy. Her brothers or Hunter were not happy with the idea, but Dominic wouldn’t let them get in the way of their relationship and she admired him for standing up to them. Hunter would always find a way to touch Kenzie, flirt with her, or whisper things in her ear when no one was aware. That confused that crap out of her. Did Hunter want Kenzie? Was this all just a game to him?

I absolutely loved the family dynamic and support that the Cahill family gave to one another. Aside from Hunter they also welcomed into their family with open arms, her best friend Hailey, Jaylinn (Hunter’s sister), Hunter’s mom, and Chloe who is Jackson’s fiancé (Kenzie’s oldest brother). The boys are very protective over the girls and I don’t mean just Kenzie, I mean all three of them. You mess with any of them, you will have not one but all four of those guys on your ass! But without a doubt you can sense the absolute love pouring out from one another. No matter what happened, that family stuck together.

Let me just say, the car ride to school with Kenzie, Hailey and Hunter playing Hot Seat was hysterical; I could not stop laughing! I would absolutely love a friend like Hailey around in my daily life. She has no type of filter whatsoever and will tell you like it is; she keeps it completely real with you. There is no sugar coating anything when she is around. That’s one of the things I loved about her. I think that balanced out her relationship with Kenzie perfectly.

Kenzie's relationship with Dominic started to change and Kenzie was becoming naïve and oblivious to what was happening in front of her. Instead, she made a bunch of excuses and tried to fix it. Every one saw it but her, and they were trying their best to protect her from getting hurt. To make matters worse, Hunter was continuing to torment her with his crazy flirting, still confusing the crap out of her.  Dominic came off as a complete dick and I hated the idea of him from the very beginning. But like all secrets, they will surface and the truth will finally reveal itself. She finally sees Dominic for who he truly is. And like always, her family is there to help her pick up the pieces of her broken heart. Hunter chooses to not leave her side.

“I’m done trying to stay away. I can’t do it anymore. I need you like my life depends on it.” ~ Hunter

Broken and feeling betrayed, Kenzie tries to focus on putting her life back together and get back on track. Hunter finally admits to everyone about his feelings for Kenzie and although they are not happy with it, he stands by her.  Confused and lost, insecurities from the past have Kenzie wondering how long it will be till Hunter leaves her too.  He has always chosen her brothers and never her, so why should this time be any different?
Will Hunter be able to stand up to her brothers and choose Kenzie? Will Kenzie be able to put the past aside and let Hunter in? Will the Cahill brothers ease up and let Kenzie live her life? Will her family be just as supportive knowing she wants to be with Hunter? Will Kenzie and Hunter stop playing these games and finally see that they belong together?
It got really frustrating at times to read the push and pull relationship of Kenzie of Hunter. I really just wanted them to get it over with and just be together. Her brothers needed to get a grip and ease up on being so overbearing. Hunter was their best friend, so of course he would treat Kenzie with such respect. Kenzie was supportive with the big clusterfuck of relationships happening around her, all she wanted was that same support back. Getting towards the end of the book, Hunter really, really grew on me; the way that he took care of Kenzie and always put her first. I could never get tired of him. Not only did I fall for Hunter, but I fell in love with the entire family. I could however, do without that major cliffhanger at the end of the book! I can’t wait to hear more of the story; I need to see what happens. Great job Megan!

I received an ARC from this author for my honest review.
This was review was completed by Jennelyn.

We stayed up until three in the morning, and then finally passed out.  I had plans of getting up early and finishing up, but I did not wake up until I heard my phone ringing.

"Kenzie, what the fuck? I told you to call me when you got there."  Mason yelled frantically into the phone.

I let out a huge groan.  "Good God, Mason, calm down.  I'm fine; we got in late, started unpacking and then fell asleep."

"It's one in the fucking afternoon Kenzie. Where is Hailey?  Is she with you?"

"Yeah, she's sleeping; we were up till three this morning. Would you relax? If you were so worried, you could have called Hunter.  He would have told you we made it."

"I did talk to him, but I told you to call me. Hunter isn't living with you.  He doesn't know what you are doing, any more than I do."

"Seriously, if you don't knock it off, I'm hanging up on you.  You are worse than Mom and Dad.  Dominic is in the same building, so if anything happens to me, he is right here to help."

"Fine, whatever."  Then he hung up on me.  I dropped my head back on my pillow. A few seconds later, I heard Hailey's phone beep.  I figured it was Mason chewing her ass out for not calling too.


When Megan Smith is not writing she is a wife to her high school sweetheart and a mom to her son. She lives in the New Jersey.  At the end of the day when she is done work and being a mom you can find her curled up with a good book or writing on her current story.

3 signed paperbacks and 3 e-copies of Trying Not To Love You up ~  Paperback giveaway is open to US Residents ONLY.

a Rafflecopter giveaway
Posted by Naughty and Nice Book Blog at 9:21 AM