BLOG STOP: BY A THREAD by RL GRIFFIN 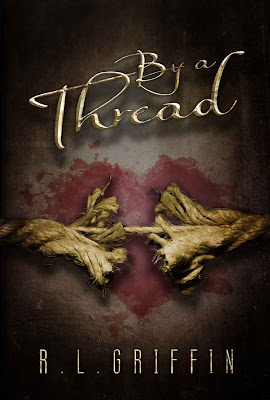 RL Griffin had me captivated to this book right at the prologue. By the third chapter, I was already sitting up straight saying, “what the f***!” From that moment on, I was not able to put the book down till I was done reading, which happened to be three in the morning! This book literally had my emotions hanging by a thread!  It was filled such rollercoaster of emotions, and I felt every single one of them (even the ugly crying parts)! RL did a great job bringing me into the story; I felt like I was living in the story itself.

Stella pretty much lost herself when Jaime died. She went into a great depression, started drinking, deferred from law school, and lost touch with her family. Being in a new city, no friends and no fiancé, she found no purpose to live.  It was up to her new roommates Patrick, who also becomes her best friend, and Billy to help her pick up the pieces and move on with life.

~Time doesn’t alter how that pain changed your personality. In fact, time which had made things tolerable, had actually allowed her to appreciate how precarious life was and gave her a little perspective. Maybe she needed to simply be enjoying life a little more. ~

She started school, but initially she was just going through the motions. Eventually something clicked and she wanted to live again. One of the first things she notices is the way George, the bartender at the bar they frequent, looks at her. He noticed her the first time she walked into the bar. Stella knows that she can never open her heart to anyone else; her heart was lost when she lost Jaime. They fall into a normal routine of being with each other on a daily basis.  George knows what he wants and he wants to have more with Stella, but she is not able to return the feelings back to him. There is definitely a strong connection between the two of them; one that goes deeper than anything sexual. However, she has her walls in place and it doesn’t seem possible for them to come down.

Will George be able to break Stella’s walls down? Will he be able to wait for her? Will Stella ever be able to get past Jaime and move on with life? Will she learn to love again? Will she be happy again?

Stella had moments where she gave up, but who wouldn't?  Despite losing herself and hitting rock bottom, she had the strength to move on after all that she endured.  She picked up the pieces and found her way again. She found herself, found independence, found her way of life.  There are secrets that will be revealed and a past the will come back to haunt Stella. How will it affect her future? Will it set her back? Or will she be able to move on? Will it be the closure she needed? Was everything and everyone she believed in a lie?

RL did a fantastic job with this book! Although, I was left with so many unanswered questions when the book ended.  I am impatiently waiting for the second book to come out! I need my questions answered!


She felt a shadow across her back a few minutes later. Stella didn’t open her eyes, but said, “Why is someone blocking my sun? I’m trying to rid myself of my farmer’s tan.”
Cassie snorted, “That’s not going to happen, Stella.” All the softball players had horrible tan lines. Stella’s arms looked like leather, but her stomach and chest were white as porcelain, as were her feet. It was heinous. The players’ legs looked like they were wearing white shorts all the time.
“I don’t know, I think it’s kinda sexy. Like I know what you look like naked,” Stella heard in a slow, sexy southern drawl. Her eyes popped open and she found herself staring at the guy with the drawl. One of the best-looking guys she’d ever seen in person. His hair was cut short and looked sandy blond in the sun. He had blue eyes and an actual six-pack. Stella had never seen a guy with a six-pack in person before, and it made her want to touch him. She laughed, noticing that he had the same farmer’s tan that she and the softball players sported.
Stella cocked her head to the side and just looked at him.
“What?” Six-pack asked.
“I’m just following suit and picturing you naked.” She said, then closed her eyes.
“Me too.” Cassie said with a giggle.
“Now I am too,” one of his friends piped up loudly. “Damn it. Someone help me get that image out of my mind.”
Six-pack leaned down to whisper into her ear, “I think you missed a spot.” His fingers grazed the small of her back, just above her bikini bottoms, and her body tensed instantaneously at the spark she felt. Sexual chemistry crackled between them.
Stella used her sweetest voice, “Oh, really?  Could you get it for me?”
“Damn right I can.” He leaned over to grab the lotion, but she got to it first.
“Oh, I was talking to Cassie.” She threw the bottle to Cassie. “Thanks, though.”
Cassie snorted again, “It looks fine to me.” Cassie yelled to the other guys, “Ya’ll got any beer over there you can share?”
“Of course,” one of the guys replied. Cassie got up, sauntered over to the baseball players, grabbed a beer out of their cooler, and sat down with them.
“Ya’ll play ball?”
Stella overheard the conversation and was interested. These were all baseball players and seemed to be pretty cool. Six-Pack’s name was Jamie, he was a sophomore. He was a pitcher. Confidence exuded from him and he seemed to be pretty smart and funny. Those were three mandatory traits for Stella before she would even look at a guy. She never fell for the type of guy who looked good, but annoyed the shit out of her as soon as he opened his mouth.
“Stella, you want a beer?” Cassie called.
“Sure.” Stella turned just as Cassie threw the beer at her. She had two options, she could sit up and catch it, showing everyone her boobs, or the beer was going to hit her... somewhere.
“Fuck,” she called out as she rolled over to dodge the beer coming at her face. She fell off the chair, but managed to keep her hands covering her nipples. For a moment everyone was quiet. Then all of the occupants of the pool erupted in laughter. Stella turned forty shades of red and tried to figure out how to get up gracefully. Realizing there was no way to cover her nipples, get up, and grab her bikini top with only two hands, she gave up. Stella stood up, grabbed her bikini top, and with her chin raised walked to the bathroom, showing everyone all she had.

Several hours later everyone was good and drunk, playing truth or dare, and it was Stella’s turn. She picked dare.
“Kiss me,” Jamie said, leaning back in a lounge chair with a smug smile on his face.
Stella got up from where she was sitting and leaned over him. She whispered in his ear, lips grazing his lobe, “You may regret this dare.” Stella kissed his neck, which made him tip his head back. She slowly kissed his top lip. He groaned, and she went for the kill parting his lips with hers. All of a sudden his arms wrapped around her, pulling her on top of him in the chair. She forgot where she was, and that they had an audience until she heard someone clear their throat.
Stella ripped her lips away from Jamie’s and took a long breath. She put her fingers to her mouth, and looked into Jamie’s eyes. Holy fuck, she thought. There’s no going back from that.
Jamie’s arms still wrapped around her, he whispered, “I think you may be right.” Stella thought for a minute he had read her thoughts. Then he said, “Best regret ever.”
Stella smiled. She pulled herself out of his arms, separating their bodies. Suddenly she felt too drunk, too high on the feeling she got from kissing this guy she just met, and too naked. She walked over to where her bag was and checked her phone. She felt arms wrap around her again.
“You need to come with me. NOW.” His lips whispered in her ear.
“And why’s that?” Stella shivered and turned around so that she could look in his eyes.
“You’re pretty much naked and I need to be the only one looking at you.” He reached up and rubbed his thumb down her jaw line. “I need to kiss you, more.”
If she hadn’t been drunk, she wouldn’t have gone home with him. But she was drunk, and she followed him home. Immediately.

COMMENT BELOW WITH THE ANSWER TO THE QUESTION FOR A CHANCE TO ENTER:

WHO IS YOUR FAVORITE MALE OR FEMALE LEAD CHARACTER?