Lost in Distraction by BJ Harvey 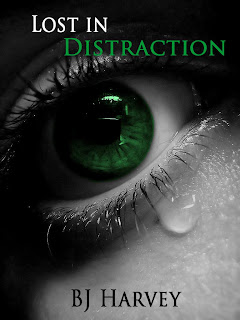 In the three years after a horrible crime claimed her family, Elise Halliwell has been alone, shut off from the world in a self-imposed emotional exile. She goes through the motions, finishes high school and moves across country to start college and begin the next step in her pre-destined life. But her exile is dramatically cut short by the entrance of a dark haired, blue-eyed, smirking man who shakes her to the core, achieving what everyone else before him has failed to do, he makes her feel again. As much as he wishes it were different, fate has not brought Braxton James into Elise’s life, or has it. Brax has to keep her safe from people in her life who have ulterior motives and may want to hurt her. Elise has no idea the threat she faces, and Brax wants to make sure it stays that way. But as Brax struggles with getting close to her, he begins to live a lie. Unable to resist the pull that is Elise’s bright green eyes, infectious giggle, and loving heart, he finds it impossible to stay away, so the double life of being Elise’s boyfriend and keeping her safe begins. Full of twists and turns, danger and revelations that no-one could predict, you won’t be the only one lost in distraction.*This book contains adult situations and explicit content/language*

I have to admit, I was not really into this book. The entire time I was reading I was waiting for something to jump at me and fully catch my attention. I never really got into until the very last chapter, and by then I was already at the end of the epilogue. It totally left me hanging! I had waited the entire book to get that spark and now I have to wait until the next release! This book was very straightforward; very little drama and spice. Don’t get me wrong, there were a few twists and turns and the photo booth scene was really hot. It just didn't constantly captivate me throughout the book like I had hoped it would be.

Coming home from camp, Elise Halliwell (Elle) received the worst news any person could ask for. Her family was murdered in their home. Since that tragic incident three years ago, Elle has been alone and feeling numb towards everything. She will run her father’s billion dollar company upon completing college. With her wall strongly put in place, she forgot what it feels like to be cared for and loved by someone.

Braxton James (Brax) left the army to take care of his dying father. In order to take care of things, he borrowed money from a loan shark, then getting a “security” job. His relationship with Elle starts off as just an assignment. But the more time he spends with her, the more his feelings start to change. They both have these feelings for each other they've never felt before. He must keep his and his best friend and partner Shay’s identity from Elle a secret in order to protect her and keep her safe. By being lied to growing up, he knows all too well what a lie does to someone. He absolutely hates keeping something so big from her, but that’s the only way. Someone is out to harm her and he will be the one to keep her from all harm. He will go to all lengths to keep her safe. Messages have been made, and threats have been passed. He must do what it takes to keep her safe for his job, but how far will it go until he jeopardizes it all? Once she knows the truth, things will never be the same for either of them.

Will Elle be able to break down her walls and finally let someone in after all this time? Will Brax be able to find the courage and tell Elle the truth? How far will they go to keep her safe? What will he do when he needs to choose between his job and Elle?

I received an ARC of Lost in Distraction by BJ Harvey for my honest review.

Review done by Jennelyn.
Posted by Naughty and Nice Book Blog at 10:46 PM