SKIN IN THE GAME by JACKIE BARBOSA 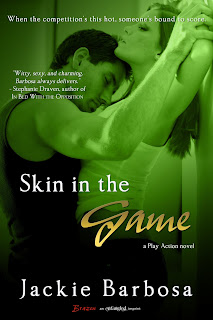 Angela Peterson was always the quiet, shy kid growing up in Harper Falls, crushing on the high school quarterback and honing her football strategy skills. Now grown up and coaching the high school team, she’s shocked when that same sexy quarterback returns to Harper Falls asks her back to his hotel room. And then tries to steal her job.
Injured NFL quarterback Cade Reynolds is in Harper Falls to take over as interim head coach, and he never thought the tall, blond bombshell he propositioned would offer up any resistance. Not to a repeat of the amazingly wild night they shared and certainly not to his coaching position.
But the Harper Falls High Eagles are Angie’s team, and even the hometown hero won’t take that away from her, no matter how hot he is. As the two engage in a battle of wits and wills, this is one game neither is prepared to lose.

This book is a book that football lovers will appreciate. However, if you’re not much of a football fan you and just looking for a really good romance book, this is it too. Jackie did a great of job captivating me throughout the entire book that I was not able to put it down and it became a very quick read for me. I had no clue as to which way she was going to go next with the book and kept everything as unpredictable as possible.

Angela (Angie) had a crush on Cade all through high school. I mean who wouldn’t, right? HOT guy, very popular, and quarterback of the high school football team. She was a freshman while he was a senior when she approached him and threw him for a loop when said that the team wouldn’t win a game if they only had twelve offensive plays. How would she know they only had twelve plays if she didn’t count every single one of them? He owed her though, because not only did the team win State Championships that year, he went on to play for the NFL.

Angie grew up with brothers, so it was obvious she grew up with football. She was very shy and kind of geeky in high school, but as an adult, she is the complete opposite. Yes, sometimes she is very shy and reserved, she likes her privacy (but who doesn’t), but she’s become beautiful and more outspoken. When her mother died, she was afraid she would lose her dad as well, so she gave up her life to move back in her hometown to take care of him and to avoid losing him too. One can see the love she has for teaching her students, and her love for coaching football.

Cade lived and loved football. He was the quarterback for his high school team, played in college and was drafted into the NFL. He was living his dream; he was doing what he loved, he was very popular, wealthy and could have any woman he wanted. But one play during a game put a halt to playing. He had injured his shoulder that required extensive surgery and rehab. He could throw a ball perfectly, but he couldn’t train like he used to. Until then, he couldn’t play, his team didn’t want him; he felt rejected. Even without playing he still made millions, but what is the money if you’re not doing what you love?

Cade is instantly attracted by Angie after seeing her for the first time. He gets more turned on by her drink order and better yet, by her picking up the sports section. He invites her to sit at the table with him. There’s something familiar about her, he knows her, but he can’t seem to pinpoint it and Angie doesn’t help him remember. He invites her to dinner and she accepts knowing Cade Reynolds is not interested in someone like her; has never been and never will be. She knows this will be a one night stand, something she never really does, but yet, being with Cade is always something she’s always thought of doing. One night is all she can give herself.

Angie almost cancels her date but meets Cade in his luxury suite. This is something she is not used to. They are from completely different worlds; he comes from a world full of money, she works for every single cent she has and spends it appropriately. As soon as she walks through those doors, you can feel the sexual tension floating in the room. While watching the sunset, plans for dinner disappear when one thing leads to another. You can feel the desire and the passion that Angie has been feeling for Cade all those years. HOT, fiery, passionate sex, it’s actually pretty intense. But there seems to be more than a sexual connection between the two, there’s something deeper. When Angie finally comes to, she realizes her mistake and leaves before he can crush her heart.

Angie is the type of person who likes to work to her way to the top and earn her way without or with very little help from anyone. She is the assistant coach of the football team, who dreams of becoming the head coach when the current head coach retires. So she is completely disappointed and frustrated when Cade is asked to fill in the Head Coach role, when he becomes ill. She thought she would never see him again, yet she can’t seem to escape him. The sexual tension builds more and more every day that they see each other. He makes it known he wants to be with her. Not only does she need to prove herself to the board, she also needs and wants to prove herself to Cade and show that she can become the best female Head Coach out there despite what the rumors say.  He needs to prove to others as well that he can still be an amazing football player. Cade wants to see if there is a something between them. In a way, so does she, but can she? Being with Cade, Angie will be in the public’s eye at all times, something she wants to avoid since she loves her privacy.  She would have to give up everything she loves and everything she worked so hard for.

I really enjoyed this book and I recommend you put it on your list to read. Not only did I like the main characters, I really fell for the supporting characters. Jackie does a great job introducing us and getting us acquainted with Rachel, Warren, her father, Coach Harvey and even the sleaze Donnelly. I can’t wait to read about Rachel and Warren in the next book.

This book was reviewed by Jennelyn.
Posted by Naughty and Nice Book Blog at 11:54 PM