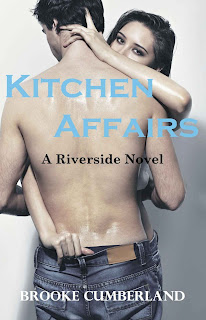 Drake Staglinao is from a wealthy empire family who runs Riverside Hotel & Restaurant in downtown Chicago. He's attractive, charming, witty, and will do whatever it takes to get the one he wants, Molly Woods. Molly, a chef intern at his five-star restaurant, shows no interest in dating Drake, or dating at all for that matter since the death of her fiancé four years earlier. After several attempts, Drake goes to extreme measures to get some alone time with Molly, knowing that he just needs a few hours for her to realize their intense chemistry is too hot to ignore. Drake finds out why Molly is reserved and guarded - but that doesn't stop him from getting who he wants. Molly and Drake need to keep their relationship private, but when a surveillance video goes viral of the two of them, they must overcome obstacles that most relationships don't have to endure. Molly needs to let go of her past in order to let Drake in... but how far can she go without cracking? Fall in love With Drake and Molly as you laugh and cry through their unusual love story! *Contains Mature Adult Content*

Molly and Liam where high school sweethearts. They had their futures planned out and were looking forward to the birth of their first child. But in an instant, all that was taken away. Molly was left to put the pieces back together. After being in a small slump of depression, Molly realized she needed to refocus and think of Stella’s future.

Molly hasn't been with anyone since Liam, and she’s left her engagement ring on her finger this entire time to remind her of their time together. She has come back from the loss of Liam, to pick up the pieces, and create a life for Stella. Working in the kitchen had always been a passion for her so she applied for a culinary school. Molly uprooted her daughter and took her best friend to Chicago looking for a better, brighter future.

Drake is a very powerful, wealthy, sexy, alpha male who knows what he wants and will stop at nothing till he gets it. Drake is the manager of the hotel she interns. This time he wants Molly, but she wants nothing to do with him. She has no interest of becoming one of his many women. Molly tries very hard, but fails to avoid a very persistent Drake. There is absolutely without a doubt an instant connection between the two and it scares Molly because she hasn't felt like this since Liam.

Their relationship purely starts off as a sexual one, a very HOT and heavy one I might add. Then it starts progressing quickly into something more. Is Molly ready to take on this big of a commitment? Drake soon realizes there is more at stake here when he sets his eyes on little Stella; who has never had a father figure in her life. They all seem to settle into a comfortable family routine. Drake will do anything and everything to keep both Molly and Stella happy. They try to keep their relationship a secret, but they are constantly being tested with the paparazzi, crazy exes, even friends with ulterior motives.

Because Drake is manager of the restaurant, their relationship makes Molly’s internship a hard one. She wants to prove herself because of her talents, not because she is sleeping with Drake. Being with Drake could cause her to lose everything that she has worked so hard for. If this internship doesn't work out, she doesn't have a backup plan because she has been independent for so long.

Will they be able to overcome all that is thrown at them and stay together? Will Drake be able to commit to one person, and be a responsible father? Is Molly willing to risk her internship for a chance with Drake? Will she be able to let someone in and be there for her and Stella?

Brooke did a good job creating a story line and I really did get hooked. However, I feel that it needed something more to differentiate it from all the other books out there. It seemed like a typical romance book. I think Drake and Molly’s relationship progressed way to fast (especially for a grieving, single mother), it just seemed unreal. When the book ended, it pretty much opened up so many questions for the reader. Where in the world will you take the second book? You definitely threw me a curve ball there! Overall, good job. I am looking forward to the release of the next book and to hearing more about the story.

Posted by Naughty and Nice Book Blog at 9:32 PM