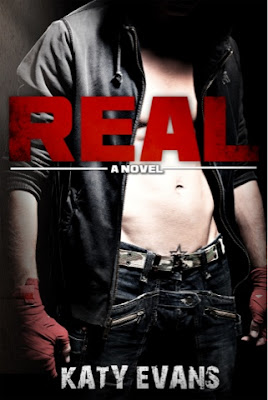 SYNOPSIS:
A fallen boxer.
A woman with a broken dream.
A competition…

IS HE FOR REAL?

He even makes me forget my name. One night was all it took, and I forgot everything and anything except the sexy fighter in the ring who sets my mind ablaze and my body on fire with wanting…

Remington Tate is the strongest, most confusing man I’ve ever met in my life.

He’s the star of the dangerous underground fighting circuit, and I’m drawn to him as I’ve never been drawn to anything in my life. I forget who I am, what I want, with just one look from him. When he’s near, I need to remind myself that I am strong–but he is stronger. And now it’s my job to keep his body working like a perfect machine, his taut muscles primed and ready to break the bones of his next opponents . . .

But the one he’s most threatening to, now, is me.
I want him. I want him without fear. Without reservations.
If only I knew for sure what it is that he wants from me?

REVIEW:
Move over Travis "Mad Dog" Maddox, there is a new underground fighter taking over the ring and his name is Remington "Riptide" Tate.

"Real" is Katy Evan's debut novel, and she has hit the ball out of the park with it.  I give "REAL" 6 stars and that does not include the star that is tattooed on Remy's 8 pack abs.

This book starts off with Brooke Dumas being forced to attend an underground fight with her best friend, Melanie.  Melanie is obsessing over a fighter by the name of "Riptide".  Melanie loves all of the excitement of being at the fight, whereas Brooke can not want to leave.  That is until she got a glimpse of what all the ladies are yelling at then she understood exactly why everyone loved Riptide.


"This guy is just too much.  Too much male.  Too much masculinity and pure raw beast.  Put together, he's just like sex on a stick and every female around me is shouting at the tops of her lungs, how much she wants to lick." ~ Brooke

Brooke Dumas, is an ex-track star whose future was changed in a blink of an eye while competing at the Olympic tryouts, when she tore her Anterior Cruciate Ligament (ACL).

Then we have Remington "Riptide" Tate a/k/a Remy.  From the moment Remy laid eyes on Brooke at the fight in Seattle, he knew he had to meet her.  Remy immediately felt a spark inside of him that he has never felt. Remy sets his sights on Brooke and seeks her out and hires her as his physical therapist and brings her along traveling from city to city for his fights.

Going from city to city, Brooke and Remy begin to get to know each other. Remy really likes Brooke, however he refuses to be an adventure to her.

"He wants to be my real, not my adventure.  Even when he will be the realest thing in my life, I know it's still going to be an adventure." ~ Brooke

Remy is not good with expressing himself through words, therefore he communicates through his love of music.  Brooke and Remy pick songs for each other to listen to which explain who they are, as well as how they feel for each other.
Remy picks "Iris" by the Goo Goo Dolls and plays it for Brooke.

I have to say when they exchange songs with each other, my heart swells.  These moments are by far, my favorite scenes in the book.  I don't think I will ever be able to listen to "Iris" without thinking of Remy.

Brooke begins to peel the layers away from Remy's tough exterior and gets to know the person who has been hidden for so many years.  Remy wants Brooke to see him for the man that he is, not the fighter "Riptide" that everyone sees.

Throughout the book Remy and Brooke become each others rock.

"I don't know if I'm bad for him, or him for me.  All I know is that this is as inevitable as an incoming tsunami, and I'm just bracing for the swim of my life." ~ Brooke

Sometimes we keep things from our significant others to protect them.  Brooke gets herself into a difficult situation, when she is faced with trying to save her sister from a life that she isn't supposed to be in.  Brooke comes up with a plan to try and save her sister, but she doesn't tell Remy what her plans are.  By protecting Remy, will Brooke ruin everything she has with Remy?  Remy's ONLY fear is losing Brooke.  The question is, by Brooke keeping this secret from Remy, will it destroy him?  Will Remy understand why she did what she did?

I love how Remy is total alpha male, but he was never disrespectful toward Brooke.  Yes, he was dominant, yet he handles Brooke with kitten gloves.

I will scream from the roof tops, that EVERYONE MUST READ "REAL". I absolutely LOVED this book.

I received an ARC for an honest review.
This review was completed by Heather.

GET YOUR COPY OF "REAL"
Posted by Naughty and Nice Book Blog at 10:26 AM