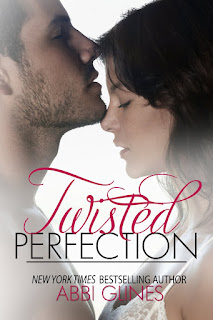 Life outside of her house was a new experience for Della Sloane. The dark secrets of her past weren’t something she ever intended to share with anyone. They would never understand. No one would ever get close enough to find out. There was always a chance she’d go crazy sooner than they expected…

Woods Kerrington had never been one to be attracted to fragile females. They seemed like too much work. He wasn’t in it for the work just the pleasure. A night full of naughty fun had been exactly what was on his mind when he’d laid eyes on the hot little number that didn’t know how to pump gas and needed some help.

What he didn’t know was she was as fragile as they came.
The carefree girl who spoke her mind and didn’t care what the world thought of her was more breakable than he could ever imagine…

Abbi Glines has outdone herself with Twisted Perfection! It had me twisted with emotions! I laughed, I cried, I got hot and bothered, I got frustrated, and I almost threw my nook.

With a traumatized past, Della Sloane was sent by her best friend Braden, on a road trip to go and find herself in the world. Della didn’t plan a final destination. She was just driving and making stops along the way until she felt right with herself. During one of her stops, she needs to put gas and doesn’t know how to. The VERY HOT Woods Kerrington helps her pump the gas. His life was set for him from the beginning; he is in line for the VP position in the country club his family owns. Della and Woods, looking for a great time, agree to a one night stand. Little did they both know, that one night stand was going to be far more meaningful.

Della continues on her road trip and ends up in Dallas. She gets into a situation with her manager and she has no choice but to hit the road again. Unsure of where to go, Tripp, the bartender at the bar she works, offers her his condo in a small town and a job; somewhere quiet where she can settle and maybe find some peace.

After the trouble, Tripp sends her back to Rosemary. Being in the same town, it was inevitable that Della would meet up with Woods. Can you guess who her new boss is? Upon seeing each other once again, their attraction for each other shows immediately. They are hot for each other even more than their first night together. Woods is Della’s boss, but that doesn’t stop them from starting a hot, sex, fueled romance. I can feel the heat coming off of the two of them, and let me tell you, they are really into each other; they can’t seem to keep their hands off each other! Talk about hot sex! Holy crap! Della hasn’t met anyone like Woods before; he treats her like she is special. He is very sweet to her, treats her right and truly cares about her.

“I’ll always help you but I’m not going to lie to you. After tonight, I’m concerned. I don’t want to drop you off and leave you alone in that damn condo. I want to take you back to my place and take care of you.” – Woods


Their relationship starts to anger people around them. They start to feel things they haven’t felt before; it starts to become more than just sex. She’s afraid he’s going to leave as soon as he finds out about her past. As they get to know each other better, Woods realizes that Della is broken and is slowly picking up the pieces; he wants to be the one to glue them together. He wants nothing more than to make it all go away and make her happy.

“You are mine. Do you hear me? You are mine, Della Sloane. I will take care of you. Nothing is taking you away from me. Nothing.” ~ Woods


The insecurities Della has about her possible future condition puts a halt on any possible relationship she will have with Woods. Additionally, she is used to being alone and she has a lot of demons that she is running from. Woods is very persistent in making her see that they have something between them. He will stop at nothing to get what he wants, and he wants Della, even if that means breaking off his engagement to another woman and giving up his future.

Is Della ready to live past her insecurities and start living life again? Will Woods be able to give everything that he worked so hard for, just to be with Della? Will they be able to withstand the people posing problems and stick together? Will Della have the courage to be honest and open up to Woods about her past? Will Wood's be strong enough to help Della get past the demons that haunt her?

I am still hungover from Woods. He is very swoon-worthy, so how can I not be?! I absolutely loved the book. However, the way Abbi ended the book killed me because it’s going to be a very long couple of months until the next one comes out! I would have preferred it if she just made it a longer book instead of cutting Wood’s story in half. Overall, she still did an amazing job well done!

Posted by Naughty and Nice Book Blog at 7:22 PM