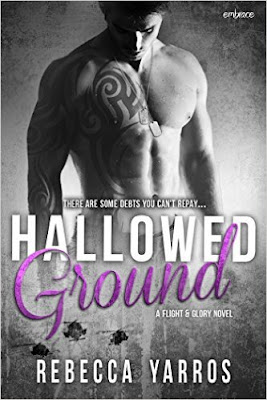 There are some debts you can't repay...

Josh Walker is loyal, reckless, and every girl's dream. But he only has eyes for December Howard, the girl he has yearned for since his high school hockey days. Together they have survived grief, the military, distance, and time as they've fought for stolen weekends between his post at Ft. Rucker and her schooling at Vanderbilt. Now that Josh is a medevac pilot and Ember is headed toward graduation, they're moving on—and in—together.

Ember never wanted the Army life, but loving Josh means accepting whatever the army
dictates—even when that means saying goodbye as Josh heads to Afghanistan, a country that nearly killed him once before and that took her father. But filling their last days together with love, passion, and plans for their future doesn't temper Ember's fear, and if there's one thing she's learned from her father's death, it's that there are some obstacles even love can't conquer.

Flight school is over.

Once again Rebecca reunites the great cast of characters from the Fight & Glory series.

This is the continuing story of Josh & December (Ember to her family & friends).  Taking their relationship to the next level Josh and Ember are now living together at Ft. Rucker. This seems to be “THEIR” time….time to grow as a couple, time with their family & friends and time to grow individually.

What happens when there is a sudden deployment and tragedy strikes once again?? What will be the results?? What happens when someone who you love dear doesn’t make it back from their mission??  How will the “after” effect the here and now of those left behind…..

Read the touching words of Rebecca unfold with the telling of one couple’s, & their extended family, story and follow the road to their ever after.

“You and me?” he whispered against her lips.

“Against the world,” I promised.

And what a beautiful world it was. Our world.

A five outta five star read for this reviewer.  Would recommend you read the rest of the series first.

This review was prepared by Corinne.  An ARC was provided in exchange for an honest review.


Rebecca Yarros is a hopeless romantic and lover of all things chocolate, coffee, and Paleo. In
addition to being a mom, military wife, and blogger, she can never choose between Young
Adult and New Adult fiction, so she writes both. She's a graduate of Troy University, where she studied European history and English, but still holds out hope for an acceptance letter to Hogwarts. Her blog, The Only Girl Among Boys, has been voted the Top Military Mom Blog the last two years, and celebrates the complex issues surrounding the military life she adores.

When she's not writing, she's tying on hockey skates for her kids, or sneaking in some guitar
time. She is madly in love with her army-aviator husband of eleven years, and they're currently stationed in Upstate NY with their gaggle of rambunctious kiddos and snoring English Bulldog, but she would always rather be home in Colorado.