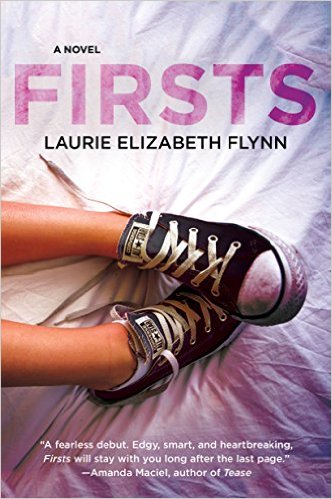 
Seventeen-year-old Mercedes Ayres has an open-door policy when it comes to her bedroom, but only if the guy fulfills a specific criteria: he has to be a virgin. Mercedes lets the boys get their awkward fumbling first times over with, and all she asks in return is that they give their girlfriends the perfect first time-the kind Mercedes never had herself.
Keeping what goes on in her bedroom a secret has been easy - so far. Her mother isn't home nearly enough to know about Mercedes' extracurricular activities, and her uber-religious best friend, Angela, won't even say the word "sex" until she gets married. But Mercedes doesn't bank on Angela's boyfriend finding out about her services and wanting a turn - or on Zach, who likes her for who she is instead of what she can do in bed.


When Mercedes' perfect system falls apart, she has to find a way to salvage her own reputation -and figure out where her heart really belongs in the process. Funny, smart, and true-to-life, Laurie Elizabeth Flynn's Firsts is a one-of-a-kind young adult novel about growing up.

When I first signed up to read this book after reading what it was about, I was very skeptical. I thought it could either be really good, or just flat out awful. I have to say, I was intrigued through the whole entire book. I honestly couldn't put it down. I wanted to know what would happen next.

Mercedes has a ton of issues. Something happened to her when she was just 13 that really messed her up. Instead of telling someone she dealt with it on her own. Her parents are not together and she lives with her Mom "Kim" who flat out sucks in the parent department. Mercy thought she was helping people by taking their virginity so that they could make the first time with their girlfriends the best night ever. She basically leads a whole other life her friends know nothing about. Including Zach who Mercedes has been seeing for awhile now.

Zach would do anything for Mercedes to be his girlfriend but she never lets him in because she doesn't know how and she also doesn't want him to get hurt. Zach is probably my favorite part of the book because he truly loves Mercedes even though she continues to hurt him. Angela is her best friend and they go to prayer group together every morning. Angela and her boyfriend Charlie are waiting until they get married to have sex. Angela knows nothing about what Mercedes does.

When Charlie confides in Mercedes and ask her for help picking out some lingerie for Angela for their two year anniversary, She knows Angela isn't ready and doesn't want her friend to be uncomfortable so she gives her a heads up. BUT, after Charlie finds out, he shows up at Mercedes house and threatens her and what happens from there I won't give away...

Bottom line, I know after reading what this book was about, I thought it sounded strange. I am glad I gave it a chance and decided to read it. It's really good!!! There were parts that had me laughing, and parts that had me crying abut what she goes through at the end of the book.  I'll be keeping an eye for other books by Laurie.

This review was prepared by Jeanine. An ARC was provided in exchange for an honest review.

Posted by Naughty and Nice Book Blog at 10:14 AM