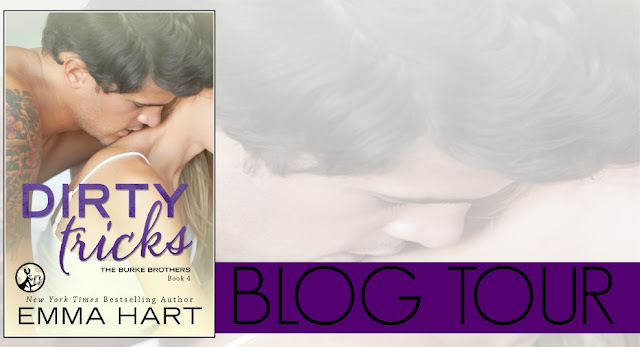 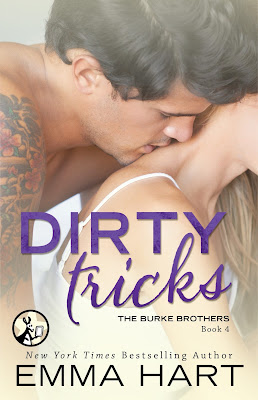 Chelsey Young's dad was a rock star. Glamorous, right? But late nights, frequent travelling, and watching endless women rub their bodies against Lukas Young's in a bid for his attention wasn't exactly how Chelsey planned to spend her senior year of high school.

So when Kye Burke, of the ultra-sexy band Dirty B, sets his sights on Chelsey, she figures the best way to get him off her back is by taking his sexy butt to bed.

But after one night together, Kye has no intention of staying away from Chelsey, especially when she's kissing him one minute then pushing him away the next. From watching her father, Chelsey knows the rock star lifestyle that Kye leads—being away for long stretches of time, girls throwing themselves at him on the regular, shirtless photos showing up in his inbox ten times a day. She wants no part of it.

Kye is determined for Chelsey to get to know him, the real him behind the rock star persona. But that isn't so easy when Kye's schedule will take him away for days, weeks, even a month or two at a time, which is a dealbreaker for Chelsey. Long distance means temptation to stray, and infidelity was the reason her own parents split. She knows it's not fair to project her own insecurities onto Kye, but some things are unavoidable.

And, distance or not, he's going to damn well prove it. 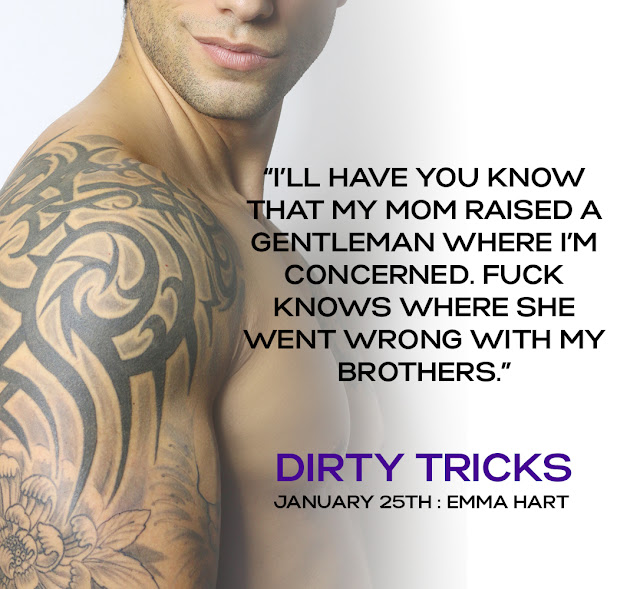 I am a Dirty B Diva at heart. Throughout the series, I have enjoyed getting to know each of the Burke brothers and the women who have captured their hearts. Kye and Chelsey felt different to me than the couples who have come before them. They had great energy, fun back and forth banter and their chemistry was unmistakable. They just didn’t have a strong storyline or a lot of growth. What you see is very much what you get from start to finish.

Kye is the nice guy. He’s still a guy, so he puts his foot in his mouth often, but you know he is good to his core. When he says he cares, he’s being honest. Chelsey is a tough nut to crack. Growing up together and both belonging to the same tight-knit group of friends means they know each other well. Kye understands her issues and is relentless to change her mind about him.

There is humor and a lot of the secondary characters interacting that keeps you invested in the gang. If you’ve enjoyed the Burke’s, I would suggest reading Dirty Tricks. While it left me wanting a bit more, I still enjoyed reading it and would recommend. 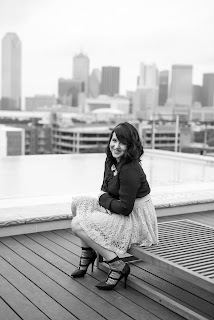 By day, New York Times and USA Today bestselling New Adult author Emma Hart dons a cape and calls herself Super Mum to two beautiful little monsters. By night, she drops the cape, pours a glass of whatever she fancies - usually wine - and writes books.
Emma is working on Top Secret projects she will share with her followers and fans at every available opportunity. Naturally, all Top Secret projects involve a dashingly hot guy who likes to forget to wear a shirt, a sprinkling (or several) of hold-onto-your-panties hot scenes, and a whole lotta love.

She likes to be busy - unless busy involves doing the dishes, but that seems to be when all the ideas come to life. 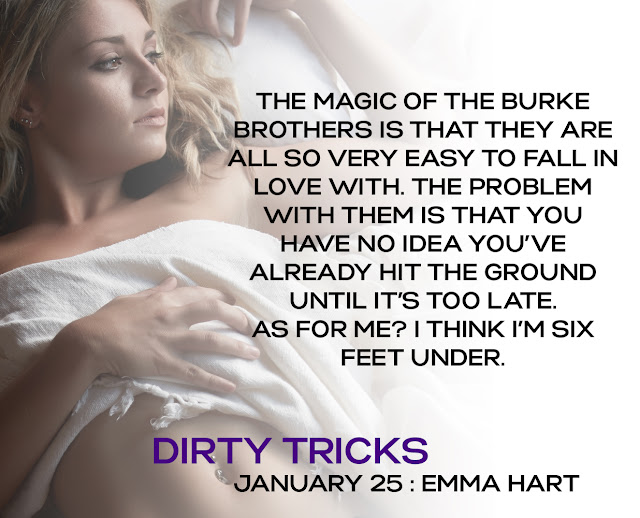 She covers my hand with hers, the calculating spark fading from her eyes. They’re back to normal now, warm, with the ghost of laughter in their depths. “You’re right.”
“Of course I’m right. Burkes are never wrong.”
Her eyebrow quirks up, taking one side of her mouth up with it. “Ya think?”
“I know.” I wink and drop my hand. “Like I know it would be an absolutely great idea to kiss you right now.”
“Like it was a great idea to sleep in my bed and poke me with your hard-on every ten minutes last night?”
I grin, seeing she isn’t going to respond to me directly, and grasp her hips. I tug her away from the counter and back until I’m leaning against the island and she’s pressed against me. Chelsey’s eyebrow lifts to join the other, but she slides her hands up my chest until they link behind my neck anyway.
I wipe the sass off her face with one simple touch of my lips to hers. She melts into me, tasting like fresh coffee and mint toothpaste. It’s an odd combination, but strangely intoxicating.
“Hey now—the sleeping was a great idea,” I murmur against her mouth. “And if you don’t want to be poked by Joey in the middle of the night, you should sort him out, woman.” I tap her ass, and she gasps, dropping her hands.
“You seriously named your cock ‘Joey’?”
“Standard practice, babe. We all name our cocks. I bet you’ve
named your tits.”
She looks down at them as if the idea is absurd, but her pause gives her away. “Yeah, I guess I kinda did. You want an introduction?”
I laugh, pulling her back to me. “I believe we’ve met, but we’re not on first-name terms.”
“Well. Kye Burke, this is Betty,” she says, cupping the right one. “And this is Boop.” She cups the left one. “Girls, this is Kye.”
“It’s my pleasure,” I mutter, fighting my laughter. She’s doing the same thing. I grab her hand and put it on my semihard cock.
“Chelsey, this is Joey. Joey, this is Chelsey.”
“We’ve met,” she laughs, licking her lips.
“Joey’s pretty fond of Betty and Boop,” I mutter, hardening in her hand.
“Feels like Joey’s pretty fond of their owner, too.”
“You wanna find out just how much?”
She sucks her bottom lip into her mouth, looking up at me in a sultry way through her lashes. Gently, she squeezes my now very fucking hard cock and steps back. “Maybe later. I’m
hungry.”
She dances across the kitchen before I can do a thing, and man am I fucking glad I put sweatpants on, because this erection is real uncomfortable, even without the pressure of jeans.
“You’re gonna pay for that later.”
She glances over her shoulder playfully. “We’ll see.”

a Rafflecopter giveaway
Posted by Naughty and Nice Book Blog at 11:00 AM