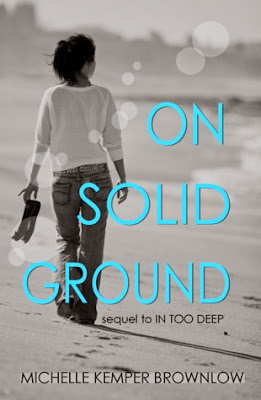 
Gracie survived an emotionally abusive relationship that wrecked her. Her ex, Noah, systematically chipped away at her self-esteem through intimidation, humiliation and infidelity which left Gracie unable to trust her own perception of his intentions. But after falling head over heels for Jake, her best friend and the man who stood by her through it all, she is ready to experience life in the way it was meant to be lived.  However, Gracie may find it impossible to simultaneously heal from the trauma of abuse while navigating a relationship with Jake. Can she put her heart on hold in order to heal her soul?The sequel to the five-star debut novel, In Too Deep, chronicles Gracie’s steps toward healing as she falls deeper in love, reaches out for help, stands on her own, steps out of her comfort zone, faces her biggest fears, and reconnects with a sensual, talented soul from her past all in hopes of finding herself on solid ground.


I ABSOLUTELY LOVED In Too Deep.  So I was super excited to see what the future held for Gracie in On Solid Ground.
While reading On Solid Ground, you’ll follow Gracie’s journey as she searches for inner peace and holds tight to Jake’s love, which has supported her along the way. On Solid Ground is a riveting book that will captivate your heart and touch your soul.
As we already know, Gracie’s ex-boyfriend, Noah was emotionally and verbally abusive toward her.  She allowed him to hurt her for way too long and he broke her in more ways than anyone knew.  Gracie’s spirits were crushed by Noah, and she didn’t know who she was without him.


“I wish there was a switch that could wipe him completely from my memory.” ~ Gracie
After walking away from Noah, Gracie was broken.  She needed to fix herself so she could love herself again and love Jake the way he deserved.  Gracie reached out for help, and made the decision to stand on her own two feet; she found her love of music again, whether it was playing, performing, or writing.  She was growing to be a stronger Gracie, one she didn’t even think could exist.  Gracie had to show Jake she loved him enough to get herself back on solid ground.


Jake was Gracie’s rock.  He was her best friend, and he has always been there to support her.  Gracie felt as though she didn’t deserve Jake’s love because she was so broken and she thought he deserved to be loved by someone who could offer him more than what she was willing to at the time.
While Gracie was trying to find herself, Jake stood by her side.  It may not have been easy for Jake to let Gracie go, but he knew he had no choice.  Jake was lost without Gracie, but he knew Gracie needed to learn how to stand on her own “without” him.   Jake has always been there for Gracie, but Gracie needed to do this on her own.


“Somehow I went from the pits of Hell right into the arms of the most amazing guy on the planet.  And not just so he could save me, but so he could love me.  And not because he felt obligated, but because he wanted to.” ~ Gracie
Gracie is learning how to express herself through her love of music.  While doing so, she meets Calon, who’s the lead singer of a band, and it is obvious there’s a connection between the two of them.  Calon opened a new chapter in Gracie’s life.  She was finally able to turn the pages on her past shitty life and look forward to all the new chapters to come.   Calon helped Gracie discover a part of her that Jake couldn’t.  Calon helped Gracie put all of her hurt onto paper and helped her express herself through music.  Was their connection romantic?  Was their relationship just about their love of music?


Sometimes jealousy can rear its ugly head when it is least expected.  Did Jake have competition with Calon?  Was Gracie interested in Calon?  Did Calon have feelings for Gracie?
I absolutely LOVED Jake and Calon.  I fell in love with Jake while reading, In Too Deep.  Calon is also a total sweetheart.  I enjoyed seeing his and Gracie’s relationship unfold before my eyes.  Calon seemed to be the missing piece in Gracie’s life.

Even though Gracie was finding herself, she still needed a little reassurance that Jakes still loved her.  Jake was in love with Gracie and he was willing to wait for her to work on her own demons.  He vowed to love her and be patient for her to figure things out on her own.


“Gracie! I’m not going anywhere.”  His voice was tense but gentle.  “Baby girl, when are you going to get that through your head?  I am here for the long haul.  You hold my heart inside yours.  Listen, I love you!  And that love isn’t something you have to work to keep.  It’s not something you can lose. You can’t earn my love; you already have it…all of it.  You can’t lose my love because it’s given to you unconditionally, it knows no end.  We can go to the depths of Hell and back to piece your heart back together but nothing can negatively affect my love for you or my passion to see your smile and to hear your laugh.  I live to love you, Gracie.  This is it for me.  You are it.  I’m not going anywhere.” ~ Jake
Gracie was thrown many obstacles in her life and she managed to get through them and not allow them to define who she is.  Things happened to Gracie that I couldn’t even fathom living through.  Gracie wasn’t going to let anything or anyone break her again.  Gracie managed to get through what life had thrown at her, all the while, Jake never left her side.


In Too Deep and On Solid Ground spoke to me on a personal level.  I knew Gracie had it in her to find the “real” Gracie.  She’d lost herself somewhere along the way while she was with Noah.  Gracie was drowning in her relationship with him.  She was in too deep.  Jake was Gracie’s light in the storm.  He was Gracie’s Forever.  Jake was Gracie’s soul mate.
I thoroughly enjoyed both novels by Michelle Kemper Brownlow.  These are books that will stay with for a long time.  What Gracie went through probably happens more times than we are aware of.  Gracie has a great support system.  I loved seeing her grow as a character.  The relationship she has with Jake was so refreshing.  Jake was a total sweetheart and every man should take a lesson off of Jake.  He was perfect. I look forward to seeing where the series goes, since there was other storylines developed in this book.  I am curious to see what happens with them.  I hope this is not the end of Gracie and Jake.  I hope I get more of them in the future. (hint hint)


This review was prepared by Heather.  I received an ARC in exchange for an honest review.

In Too Deep by Michelle Kemper Brownlow

Long- Gracie has just finished her freshman year of college in Memphis when she takes a job at a local pizza joint in her home town of McKenzie, Tennessee. She is the epitome of innocence when she meets Noah. Noah is unabashedly handsome, intriguingly reckless and just cocky enough to be sexy. Gracie’s instincts tell her to stay far away from him and based on the stories she hears from her co-workers he leaves broken hearts in his wake. But still, she can’t explain her fascination with him.


Noah puts aside his bad boy ways when what he thought was a summer crush has him unexpectedly falling in love. But soon after Gracie transfers to UT Knoxville to be with Noah, their unexpected love becomes riddled with anger, deceit and humiliation.

--B&N: http://www.barnesandnoble.com/w/in-too-deep-michelle-kemper-brownlow/1115479302
Click here to read my REVIEW for IN TOO DEEP 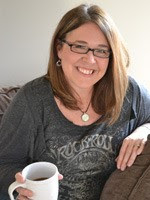 
Michelle Kemper Brownlow has been a storyteller her entire life. Her debut was on the high school cheerleading bus granting requests to re-tell her most embarrassing moments for a gaggle of hysterical squadmates.

Earning her Bachelor’s degree from Penn State University in Art Education and then marrying her very own “Jake,” she moved to Binghamton, NY where she taught high school. After having two children she quit work and finished her Master’s degree in Elementary Education at Binghamton University.

The Brownlow family of four moved to Michelle’s hometown of Morgantown, PA while the children were still quite young. A few years after moving, her family grew by one when they welcomed a baby into their home through the gift of adoption. The family still resides in PA, just miles from where that high school cheer bus was parked.

Michelle has been an artist for as long as she can remember, always choosing pencils and crayons over toys and puzzles. As a freelance illustrator, her simple characters play the starring roles in numerous emergent reader books published by Reading Reading Books.

“Writing is my way of making sense of the world. When I give my characters life on the pages I write, it frees up space in my mind to welcome in new stories that are begging to be told,” says Brownlow.