BLOG TOUR - UNTIL YOU INTERVIEW with JARED and TATE and GIVEAWAY

We’d like to thank Jared and Tate for stopping by Naughty and Nice Book Blog.  We promise that the two of you will leave unscathed.  We are going to ask some tough questions and if you are not comfortable answering them, please let us know.

We are going to start this interview with Jared, then we will turn our attention to Tate and get her perspective on things.
Jared, why did you feel it necessary to lash out on Tate, when you were hurting?


"I wanted to make myself untouchable. Pushing Tate away—lashing out—it was more about cutting her out of me than cutting her up."


Your words and actions crushed Tate, you made her not want to come to school.  You made her uncomfortable in her own home.  Why did you find it necessary to try and break her?
"I hated that I loved her. I thought that I’d been forgotten. I didn’t see it so much as me trying to break her but me trying to crush the hold she had on me. It was about getting control of myself. Of about not caring for anyone."


How did you feel when Tate said, and I quote “You’re a miserable piece of shit, Jared.  But then, I guess I’d be miserable, too, if my parents hated me.  Your dad left you, and your mom avoids you.  But who can blame them, right?”
"It’s in the book. I really don’t want to go there again."


Do you regret the way you treated Tate?
"Everyday."


If you were given an opportunity for a “Do Over”, what would you do?

"I would’ve ripped through the tree the night she got back from Europe and told her everything."


Was it hard to tell Tate you needed her?
"Yeah. I think that was when I really realized that I did need her. That I couldn’t get through this world alone like I thought I could."

Why did you think Tatum didn’t belong?


"She was better. She was too good for the crowd I ran with. Tate’s smart, driven, and thirsty for the world. I never truly wanted to see her lose any of that and get caught up in bullshit."

Did it feel good to finally tell Tate you loved her?


"Kind of. It felt good to let go of the anger and hate, but then I was scared that I was opening myself up to more pain and disappointment. It was hard for me to take chances like that."


Have you let go of the pain from your past concerning your father?
"Does anyone? The damage will always be there to some extent. I have anger, disgust, and a heap of other emotions, but I know he can’t hurt me."


Both of your tattoos have meaning.  The script on your side of your torso as well as the lantern on your arm.  Have you gotten anymore?

"I got Until You added to my torso tattoo, and I’m planning another one to cover about half of my back, but I’m not telling anyone what it is yet. Including Tate."


How would you describe the real Tate?


Did you ever think you and Madoc went too far?


"With Tate? Sure. I’m not a machine. I always felt guilt. But the more I lashed out, the foggier she got to me. It was like she was disappearing from my life and my memories. So I kept doing it, hoping to wipe her away completely.  But it didn’t work."


When the Race Master turned the rematch into a rematch of cars but not drivers what did you think?


Tell me about the fossil?


What did you think about Ben?


"Look, Ben’s a decent guy. He doesn’t talk trash, and he’s nice to people. We’ve always gotten along."
"He was never going to have Tate, though."


We are going to bring our attention to Tate.
You tried to hurt Jared with those words, but it appeared that you were hurt more by them.  After those words left your mouth, how did you feel?


"At first, it felt great to lash out and try to tear him apart, but then it didn’t. What I said to him was mean and served only to hurt him. That wasn’t me. I didn’t want Jared hurt. I wanted him to stop."


You mention that a part of you died when your mom died, but when you met Jared that part came back.  That you didn’t hurt anymore.  How did you feel when Jared left you without any explanation as to why?


"At first I was confused. I didn’t know why he was avoiding me, not talking to me, slamming the door in my face when I tried going over to his house. I tried to think over and over again what I could’ve done to make him so mad. And then, I just felt so alone. Like I had absolutely nothing to look forward to the next day."


When the video of you and Jared went viral, as a reader, I wasn’t sure it was him that did it, yet you automatically you assumed it was.   At that point, Jared was winning your heart over and was showing you how much he loved you.  Do you wish you would have waited to talk to Jared before damaging his car?


"Of course. Now I know the truth, but when it happened, I was anything but calm."


What did you think when you first found out your best friend was seeing Jared?
"Betrayed."
And Jared, what were your motives in dating her? Was it just to piss Tate off?
"No. I didn’t really want to take her best friend. I wanted to make her hate me."

Have you forgiven Jared for everything that he has done to you in the past?
"Yes. Jared and I have wasted enough time."


What thoughts went through your mind when Jared asked you to drive his car for the rematch? You seemed confident.


"I had no doubt the race would be easy, and I was thrilled and disappointed at being thrilled. I didn’t want Jared to know that I wanted to do it."

Jared, do you think you have earned Tate’s trust back?
"Trust takes time. If anyone knows that, I do. All I can do is keep trying to prove to her that I’m here, and I’m not going anywhere again."

We’re going to wrap this interview up.  But before we go, we’d like for the both of you to tell us something about each other that we don’t know.  It can be anything.


Tate: "Jared and I dressed up as Darth Vader and Princess Leia for Halloween when we were 11."


Jared: "You had to tell them that? Alright, well…Tate cries every time she watches Rudy. And she watches it a lot. Like it’s still a tear jerker that he gets to play football at the end! After 100 times, you’d think she’d get over the fact that—yes! —Rudy got to play football!" 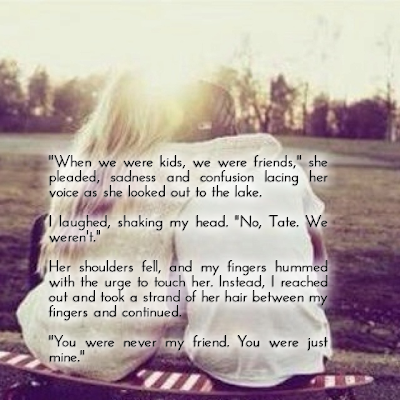 ONE CLICK and GET THESE BOOKS TODAY!!!!
Make sure to ENTER the GIVEAWAY !!!!

a Rafflecopter giveaway
Posted by Naughty and Nice Book Blog at 11:03 AM

Email ThisBlogThis!Share to TwitterShare to FacebookShare to Pinterest
Labels: INTERVIEWS