TAKE ME ON by CHERRIE LYNN 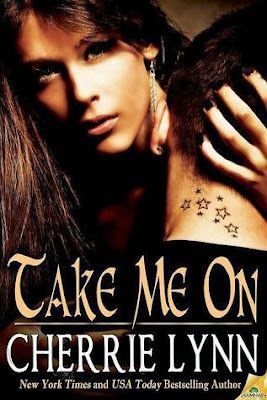 The consequences of a moment can last a lifetime.

Gabriella Ross suffered every bride’s worst nightmare: a no-show groom. Now summer stretches before her with nowhere to go but home, at least until it’s time to go back to medical school.

Determined to prove she might be down but definitely not out, she chucks all her old plans in favor of having a good time—starting with giving herself a pair of wings. Tattooed wings, that is, in the form of a phoenix on her back.

When everyone else at Dermamania chickens out at the prospect of putting the gorgeous, perfect skin of the boss’s big sister under the needle, Ian Rhodes finds himself stepping up. Then unexpectedly connecting with her through tears that have nothing to do with the pain of getting inked.

Attraction flares into one hot night that was supposed to stay that way—single, and secret. But best laid plans have a way of getting blown out of the water. Now two perfect strangers must plan for a very different future…beginning with whether there’s enough common ground to spend it together.

Cherrie Lynn delivered yet another AMAZING read.  I had no doubt that I would fall in love with the new guy, that caught Gabriella's interest.  You will not be disappointed with Take Me On, as you will get your fair share of Brian, Ghost and Evan as well.

After being stood up at her own wedding, Gabby's heart was shattered and she was totally embarrassed by her fiancé, Mark's actions.  Had there been signs?  Did she miss something?  Why would Mark do this to her?  Gabby leaves Dallas and returns home for the summer to stay with her parents.  Gabby's family seems to think that she is spiraling out of control. She is going out to the bars every night and sometimes not coming home at all.  Brian is thrown for a loop when Gabby shows up at Dermamania wanting a tattoo. Brian and Ghost refuse to do her tattoo, so Ian volunteers to do it.  Ian doesn't know Gabby, he has only heard a few things about her that Brian has said.

Once Ian starts Gabby's tattoo, she begins to open up to him behind the reasoning for  wanting a phoenix on her back.  Ian realizes that Gabby wasn't spiraling out of control, her tattoo was about her healing.  Gabby realizes that hitting rock bottom, could only mean that something better was right around the corner.  Gabby feels a connection with Ian.  For some reason, she feels as though she can be honest with him and tell him how she feels.

Gabby is thirty six and feels like she always planned everything in her life.  She has never lived for the moment.  Gabby had her entire life planned with Mark.  When Mark left her, Gabby began to question her future.  Had Gabby focused on her career to much? Would she ever meet someone again and have a family?  Was all of this out of her reach?  Was it too late for Gabby to have everything she dreamed of?

Gabby didn’t want to over think everything anymore.  She wanted to live in the moment for once.  Gabby acts on her feelings for Ian when she runs into him at the bar after getting her tattoo.  After a few drinks and a few games of pool, the two of them end up at Ian's apartment and things get really hot, really quick.  The connection between the two of them is undeniable.   Can one night change everything?  Was Gabby in the right place at the right time when she met Ian?  Could she have a future with Ian?  Would the two of them fight their feelings for each other?

Ian was drawn to Gabby, as much as Gabby was drawn to him.  There was just something about that green eyed goddess, he couldn't get her out of his mind.  When one things lead to another, someone must go all in.  Will it be Ian, or will it be Gabby?

“You think just because we were only together one night that I don’t give a shit about you, or about this?  You got under my skin.  Ever since that night, I haven’t been able to fucking stop thinking about you.  I haven’t been able to sleep for imagining you beside me.” ~ Ian
When push comes to shove, Gabby needs to make a decision.  A decision that will effect her entire future.  Will Gabby chose Ian?  Will Gabby be strong armed by her parents?  Will the Ross family give Ian a chance?  Will the Ross’ think Ian was good enough for their daughter?  Will they reject Ian as Candace’s family has rejected Brian?  Are the Ross' hypocrites?

I didn't think it was possible to love Brian Ross anymore.  He is so supportive in this book.  He may be Gabby's little brother, but he has her back 100%.  He also is very supportive to Ian.  He knows first hand what it is to feel like you are not good enough just because you are not a doctor or a lawyer or have a college degree.  Those things don't make you lesser of a human being than someone who does.  Ian may not have come from money, or have been privileged enough to grow up in a mansion, but he is AMAZING.  His personality is what draws you to him.

I absolutely LOVE this series.  I can not get enough of it.  I always find myself reading these books in one sitting.  I can NEVER put the book down, because I am dying to know what is going to happen next.  I will let you in on a little secret.  With the way the book ends, there will definitely be more of the Ross Family to come.  With that being sad, we will definitely get more of Brian and Candace.  I am super excited about this!!  Can you tell ??


THIS IS AN AMAZING SERIES. GET ONE CLICKING !!
(**The series is listed in the order in which they are intended to be read**.)

Posted by Naughty and Nice Book Blog at 12:02 PM