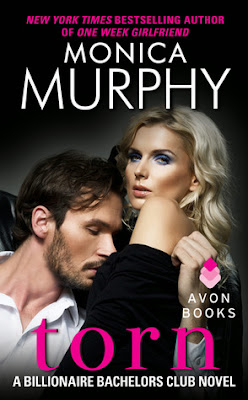 Marina Knight came to this party for one thing only: to slap Gage Emerson in the face. Poised to snatch up her family’s real estate empire, the sexy tycoon is on the verge of making an enemy for life—even if he can make her melt with a single kiss …

When Gage discovers that the alluring woman before him is the key to his latest acquisition, claiming her as his suddenly doesn’t seem quite so cut-and-dried. To get what he wants, he must get to know the fierce woman willing to face him down—as she steadily steals his heart.

Gage’s persistence and intense passion war with Marina’s determination to protect her family. As they delve deeper into an affair they didn’t see coming, Marina’s torn: Will she lose her heart to Gage—or everything she holds dear?

Torn is the 2nd book in the Billionaire Bachelors Club Series. As we already know, Asher, Gage and Matt are best friends.  While at a friend's wedding, the three of them declared they NEVER wanted to get married.  The wager was high.  ONE MILLION DOLLARS to the last single man standing.  Asher is out, being that he fell in love with Gage's baby sister, Ivy and they are engaged to be married.  So the bet is between Gage and Matt.  Who will be the last single man standing?  Gage? Matt?

Gage Emerson is a real estate developer. He has been buying up property in Napa Valley and flipping it for a profit. He has his eye on a strip mall that he wants to purchase, but the owner won't return his telephone calls. He heard through the grape wine that the owner has been affected by the economy and is in need of money.

At a wine tasting event, Marina sets her focus on Gage.  She knows who he is, but Gage has no inkling who she is.  Marina knows that Gage wants to buy the strip mall, her family owns it.  Marina and her Aunt Gina run Autumn Harvest, an organic bakery which is one of the stores in the strip mall.  Marina notices Gage in the crowd immediately.  He has a certain presence that makes him known.  Gage and Marina talk for a few minutes and it doesn't take long for Marina to tell Gage exactly what she thinks of him. Gage is shocked.  He has never had a problem getting a woman's attention, but this woman, she is in a league of her own.

After telling Archer about his interesting evening with Marina, Archer lets Gage in on a little secret.  He tells her who Marina is, who she is related to.  Gage is stunned. He needs to try and back pedal his first impression that he left with Marina.  Gage sets a plan in motion to get close to Marina, but will his plan work, or back fire?

Marina is a beautiful woman, but she is no dummy.  Marina knows that Gage has an ulterior motive when he shows up at the bakery. She knows that he is probably only being nice to her, to get close to her father.  But when Marina finds out that Gage knows Archer Bancroft she decides that she could get something from him as well. Marina just doesn't know how well Gage knows Archer.  Gage keeps that little secret in his back pocket.  When Gage realizes that Marina wants a meeting with Archer, he uses this to his advantage.


"You're going to force me to go out to dinner with you and in return you'll help me arrange an appointment with Archer Bancroft?"

"I'm not forcing you to do anything, Marina."

When the two of them begin to develop feelings for each other, neither of them know what to do.  Do they express them? Do they both just go along with the original plan? Could they just use each other to get what they want?  They are torn.  Do they follow their hearts, or their heads?  Do they go after what they both want, or just stick to the plan?

Gage is funny, he is a charmer, he is cocky, he is gorgeous, he is captivating, and he has a heart of gold.  He doesn't want to take her business away from her.  What would happen if he was given the opportunity to buy the strip mall?  Would he buy it and leave Marina without a job?  Would Marina ever trust Gage if he buys her family's property knowing that is will leave her family with nothing?  Decisions, decisions....

Has Marina captured Gage's heart?  Will Gage fight his feelings for Marina, just so he can win the bet?  Is Gage capable of loving someone?  Will Marina trust Gage, knowing what his ultimate goal is?  Could there be a future between the two of them?

I enjoyed this book.  It was an easy read just like Crave.  I have to be honest though, I am not a fan of the cover.  I think the cover models are way too old.  Gage is 28 and Marina is 23.  But hey, a cover doesn't sell the book, the story does.

I am a HUGE fan of Monica Murphy, so I know I will never be disappointed with her books.
I am looking forward to Savor to see what is in store for Matt.  Will he be the last man standing?  Will someone capture his heart? hmmm  January can not come quick enough.

This review was prepared by Heather.  I received an ARC in exchange for an HONEST review.

Posted by Naughty and Nice Book Blog at 2:02 PM