Release Day Launch - Drawn through You by Sarina Rhoads 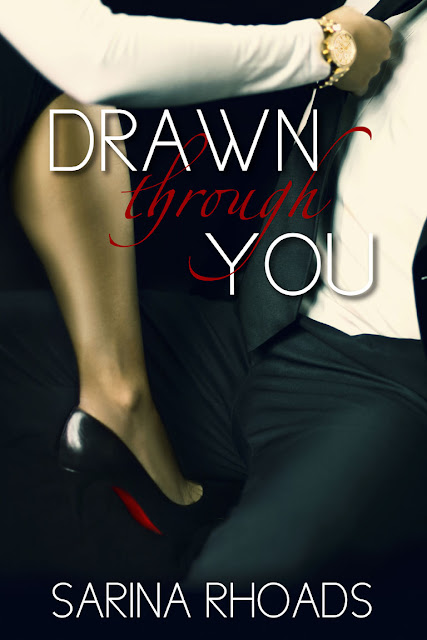 Drawn Through You Synopsis:
What if the brooding billionaire wore pencil skirts and Louboutins? What if the impressionable intern was a small-town furniture maker with boyish charm?

Cole Jacobson always thought he would take after his father and pursue his dreams. But when the family business falters and he’s forced to accept his uncle’s help, Cole is summoned to the big city for a job he never wanted.

Priorities become obscured when Cole finds himself working for Shaun Wright, the strong, intimidating, and ruthlessly attractive business partner at his uncle’s contracting firm. Forced to either sacrifice his hard-won integrity or leave behind the one thing that brings him true happiness, Cole must make a decision that could cost him both. A decision only complicated by the sexy, inscrutable woman he can’t stop thinking about. A woman who just might be as intrigued as he is to cross professional boundaries.

A provocative, trope-twisting romance, Sarina Rhoads’s Drawn Through You finally puts
the heroine on the other side of the desk.


They stepped onto the elevator, just the two of them, but she pressed twelve instead of six. Were they back at square one, where she retreated to her office in the sky instead of dealing with her feelings head on? Too bad for her, Cole thought to himself. There was too much at stake for him. More than she could even fathom. He needed to make a decision about his uncle’s ultimatum, and the clock was running out. The fate of his father’s business still hung in the balance, dependent upon his next move. Shaun’d basically said she was done with Olivia, and the way she had stared at him when she didn’t think he’d notice had set his body ablaze. Frustrated, rejected, and somewhat inebriated, Cole slammed his fist against the emergency stop button and the car jerked to a halt.

“What the–?” Shaun exclaimed as the scream of the buzzer bounced around the four walls. Cole stepped toward her while she inched back. “Are you drunk?”

He attempted to shake off the beer fog slowly swallowing his brain whole. “Maybe.” He would let Shaun make up his mind. If she turned him down right here, right now, then he’d be free and clear. He’d report back to Robert that she wasn’t interested and that he’d need to employ another stud-for-hire. But what if she didn’t? Cole thought as he ceased his forward progression.

Not an inch of space remained between them. He searched her eyes, ears honed in on her rapid breathing, which he could hear even over the thundering of his own pulse and the buzzing of the elevator. “In the stairwell, you saw me, didn’t you? You saw me before I dropped my file, and you liked it.” He didn’t know where the sudden surge of courage had come from. The beer? The shitty position his uncle had cornered him into? Shaun continued to stare in silence. “So is it just women for you now, Shaun? Is that why you can’t address the idea of going out with me?”

“I… We…” She flattened her palms against his chest, but didn’t push him away. A sign to keep going? He half wondered if she could feel the thump of his heart against his ribcage or the spike in his body temperature. She was so beautiful this close. He’d failed to notice the light dusting of freckles across the bridge of her nose or the tiny scar above her left eyebrow until now. The scent of her perfume acted as a hallucinogen when mixed with the glorious vision before him. He leaned down, mouth almost brushing over hers.
“Shaun,” he breathed.

With a second jerk, the elevator started moving again. Cole glanced down, finding Shaun’s finger on the emergency button. Her action was answer enough. He backed away to the opposite side of the car and poked at the button for six.

When the car stopped, he glanced over his shoulder at her. She hadn’t moved. Didn’t that make him feel even more like an asshole.

“Don’t worry, Ms. Wright. It’s just business between you and me from now on. I promise.”
He stepped out, leaving Shaun to continue her ascent to the twelfth floor alone. He was tired of looking like a world-class idiot, hard up on his boss and her mind-scrambling skirts. He’d really thought something had passed between them at lunch, but no. Maybe the pressure from his uncle was starting to fuck with his brain.

Cole stopped and turned around. Shaun stood just outside of the elevator, one arm stretched out to keep the doors from closing. Her expression gave nothing away, but he could see her swallow, as if she were preparing herself for something. She cleared her throat and proceeded in a voice that lacked the confidence he’d come to associate with her.

“I’m not sure that will be enough.” Without another word, she stepped back into the elevator and disappeared. 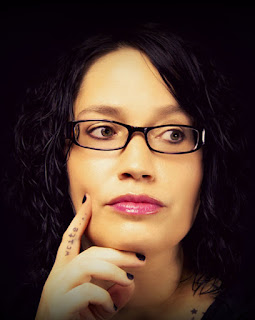 Sarina Rhoads Bio:
Maintaining a suburban orbit of NYC all her life, Sarina Rhoads ran the gamut of odd jobs in pursuit of a one true passion. Once exposed to a world of creative storytelling through online writing groups, she fell completely in love. Now she finds pleasure in penning both contemporary and paranormal romance, possessing notebooks chock full of ideas only waiting to be released.

a Rafflecopter giveaway
Posted by Naughty and Nice Book Blog at 9:22 AM