Irresistibly Yours (Oxford #1) by Lauren Layne 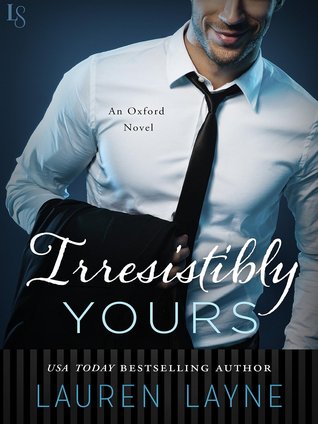 Meet the men of Oxford magazine! In the first captivating spin-off of Lauren Layne’s Sex, Love & Stiletto series, a not-so-friendly battle of the sexes turns into a scorching office romance.

Hotshot sports editor Cole Sharpe has been freelancing for Oxford for years, so when he hears about a staff position opening up, he figures he’s got the inside track. Then his boss drops a bombshell: Cole has competition. Female competition, in the form of a fresh-faced tomboy who can hang with the dudes—and write circles around them, too. Cole usually likes his women flirty and curvy, but he takes a special interest in his skinny, sassy rival, if only to keep an eye on her. And soon, he can’t take his eyes off her.

Penelope Pope knows all too well that she comes off as just one of the guys. Since she’s learned that wanting more usually leads to disappointment, Penelope’s resigned to sitting on the sidelines when it comes to love. So why does Cole make her want to get back in the game? The man is as arrogant as he is handsome. He probably sees her as nothing more than a barrier to his dream job. But when an unexpected kiss turns into a night of irresistible passion, Penelope has to figure out whether they’re just fooling around—or starting something real.

This is the first book that I have read by Lauren Layne.  I am very grateful that the publisher sent me the blurb for this book with the opportunity to review. Immediately I was drawn to the blurb. So once I sat down to read Irresistibly Yours, I was a goner. I could not put it down and was sucked in from he very beginning.

Penelope Pope moved to New York City to try and secure a Sports Senior Editor position at the infamous Oxford Magazine after her heart was broken by the man she thought she was in love with.  Not only did he shatter her heart, he also stole her dream  job right from underneath her.

Cole Sharpe is a freelance sports writer for Oxford Magazine, so when the position for the Senior Editor position became available, he assumed he had the position in the bag. Yet, that wasn't the case. Little did he know, he had some fierce competition. His competition, was a little fierce brunette tomboy by the name of Penelope Cruz.

When the two of them meet my mistake, Cole is drawn to her. He can't keep his eyes off of her. He doesn't understand why, because she is not his type.  But there is something about her that he enjoys spending time with her. Could it be their love for sports? Could it be that she is simply kind and innocent, something new that Cole isn't used to?

When the two of them interview for the same position, neither one of them expected the outcome.


Penelope is her own worst enemy, her worst critic. She has always been a tomboy, with her body which lacks curves. She doesn't feel desired. She feels as though no man would look at her to be attractive, that they are out of her league. But in reality, men can't seem to take their eyes off of her. Men are attracted to her, men are drawn to her. Cole is drawn to her. Cole is attracted to her. Cole yearns to touch her. To kiss her. To be inside her.  So when an unexpected kiss turns into a night of irresistible passion.  Penelope has to figure out whether they’re just fooling around—or starting something real.

Cole has quite the reputation as being a ladies man. He loves sports and his brother. That is it. He has no room for a girlfriend in his life. Once he and Penelope begin to spend time with each other, he realizes that he misses her when she isn't around. He misses the conversations that they have. The connection that they have with each other. He has never had a connection with another woman, like the one he has with Penelope.  Cole and Penelope's relationship changes in an instant. One night changed it all. One kiss changed everything.

What happens when the two people vow they won't fall in love with the other? Will they decide there are alternative ways to get what you want, but at the time time, keep your hearts safe? Sometimes our hearts want more than we our brains.

Cole and Penelope have an amazing chemistry, one that the readers can relate to. Their banter, their friendship is what made their relationship special. Both Penelope and Cole need to learn that they are both capable of loving. That they can trust each other. That they won't hurt each other. But will the two of them be able to do that. I guess you will have to read it to find out.

Irresistibly Yours is a MUST READ !!!  I absolutely LOVED this book. I will definitely be continuing with the Oxford Series. I will be one clicking some of this author's previous work.

Posted by Naughty and Nice Book Blog at 1:07 PM