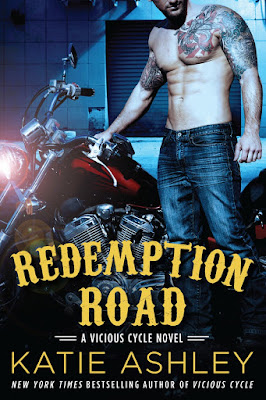 Looking for a walk on the wild side, Annabel Percy, the daughter of a powerful politician, gives in to an attraction to a sexy biker she meets one night. But she finds herself living a nightmare when she’s kidnapped and transported into a hell on earth she never could have imagined.
Born and bred into the Hells Raiders MC, Nathaniel “Reverend” Malloy lives and dies for his brothers. But when he becomes the unexpected savior of a rival club’s captive, Rev makes it his personal mission to nurse Annabel back to health—and to shelter her from the nightmares that torment her.
Once Annabel heals, she’s stunned to realize she is falling for the seductive man who saved her. Faced with their impossible attraction, can she accept the life he leads, or will Rev walk away from the only life he’s ever known for the woman he was never supposed to love?

“Somehow two broke people had found the other half that completed them and made them whole. The worst of circumstances had brought us together, but some of the greatest loves in the world were born of tragedy.”

Nathaniel “Rev” Malloy has always been the more compassionate, the one more into books, the softer one you could say, amongst the Malloy brothers. But don’t let that deter you. As the president of the club, he makes the toughest decisions and will do anything to protect his brothers and his family. He can be pretty badass, when it calls for it.

“He was such a paradox- a tender, gentle soul wrapped up in a handsome, yet hard and gruff exterior.”

Annabel Percy has gotten everything handed to her just about her entire life, all her decisions made for her, just about every single one of them. As much as she loves everything that she has, she would love just a little bit a freedom. Just a little room to breathe and be herself. Just once she decides to risk playing by the rules to get a little thrill. When she ditches her date, one chosen for her, for just one night and onto the bike of a sexy rider, her life will change forever. Never in her life would she have imagined that one decision could have turned into this result.

“Here was a man who was trying in every single way to help me find peace and healing. A man who had connected with me because he had been through his own hell.”

Rev was approached by the clubs doctor for help getting his daughter back. It puts Rev in a tough spot since he is trying to make the club clean and legit but taking on this mission will definitely put the club back out there. However, this mission touches a close subject to Rev, which is why the good doctor approached him in the first place. The doctor knew Rev wouldn’t be able to turn it down. He knew if anyone would be able to fight to bring his daughter back, Rev would be the man. Rev risks everything, of course, and tries not to involve anyone he doesn’t need to just to bring her back safe.

“A tormented life of unfilled dreams."

With the help of other men from the other clubs, he gets to where he wants to be, but finds Annabel instead. Barely conscious and not knowing who she is at the time, he takes her and nurses her back to health. When Annabel pulls through, she is scared out of her mind, considering everything she has been through but Rev reassures her he will not hurt her and she believes him. There’s something about him that brings comfort to her. It’s like she knows it in her body that he will not hurt her and that he will protect her, that she is safer with him than anyone else.

“By showing true repentance for what you have done, you can find redemption. All you have to do is ask for forgiveness to whatever higher power or being you believe in.”

Annabel feels safe with Rev and within that short time of being with him, she decides to go back home with him since she has nowhere else to go. Her parents are probably frantically looking for her but she does not want to go back to that life just yet. Annabel settles in with Rev while she slowly recovers, bringing out a whole new different side of Rev. He devotes a lot of time to her. Getting to know her as much as he can, realizing they have a lot in common. They seem to bring out the best in each other. With Annabel in his home he thought it would be awkward at first but it’s a wonderful feeling coming home to her at home. It actually feels like a home with her there. He doesn’t want to think how it will be like once she leaves. She’s everything he ever wanted in a woman, heck she is even interested in the likelihood of the club. And the men would do anything to protect her. But the club kind of hits close to home for her, Annabel just isn’t cut out for the biker life. Their worlds just don’t mesh. They’re just too different.

“I believe in my heart of hearts that you were meant to save me. So maybe in turn, I’m meant to help you my showing you what a wonderful person you are, regardless of what negative voices in your head tell you.”“We both have baggage. I’ll help you carry yours, and you can help carry mine.”

When the past comes rearing back to haunt them, there are just too many lives at stake. Is Annabel still worth protecting? Is she worth putting the club at jeopardy for? Or will one bad decision change their future? Can Rev and Annabel make things work? Or are their worlds that far apart that they can’t meet in the middle?

“The feeling of being with him was overwhelming. It was a connection of mind, body, and soul on a level I had never experienced before.”

I completely fell for Rev in the first book that I felt he needed his own book and I’m glad he did. But damn his story damn near killed me. I felt for him and Annabel and the situations that they both had to endure. But for two broken people to seek comfort in one another was a wonderful thing to see. They were able to heal together. Rev was so broken all these years and no one was able to help him but Annabel. And Annabel was so frightened yet sought comfort in Rev. It’s like she instantly knew. This story did its justice on how Rev is. He will do anything for anyone. Put his life on the line for anyone. The club was going straight, but he knew deep down that he needed to do this mission because he had a personal vendetta. I can’t wait for the next one!

As I reached for her bleeding wrist, she shot up off the floor, trying to escape me. A feral gleam burned in her eyes before an agonized scream escaped her lips.
“You fucking bastard! Stop being a hero. Just let me die!”
Ignoring her, I pinned her against the wall. Like a caged animal, she began to fight me, kicking and clawing. Bright red blood began to paint us both. I couldn’t imagine how she even had the strength to fight after all she had been through.
Bishop appeared behind me. “Jesus Christ!”
“Get out,” I commanded.
“Should I get Breakneck or one of the nurses?”
“Just get the fuck out.”
“Rev, she needs fucking sedation not only before she shreds you, but before she bleeds out.”
“Get. Out!” I bellowed.
Grumbling under his breath, Bishop stomped out of the bathroom. With my thighs bracing Annabel’s, I pinned her in place with my hips. I grabbed one of her wrists. Winding the ripped shirt around and around, I managed to cut off the bleeding. As I surveyed the wound, I silently thanked God she had made a novice’s mistake and hadn’t cut too deep. She would need stitches, but it was nothing life-threatening. After tying the makeshift bandage tightly in place, I moved on to the next hand just as the palm was about to come in contact with my face.
When I was done, I exhaled the breath I’d been holding. The roar in my ears and the pounding in my chest slowly began to dissipate.
Defeated, Annabel sank slowly down the wall and onto the floor. Staring at the bandages, she questioned, “Why? Why couldn’t you just let me die?”
“Because it’s not your fucking time. If it was, you would have gone up in that blast with the rest of the women.” I raked a shaky hand through my hair. “Besides, you’re twenty-four years old. You’ve got your whole fucking life ahead of you.”
Shaking her head, she replied, “A tormented life of unfilled dreams.”
“You don’t know that. You can’t let this defeat you. You can’t let them defeat you. You take your life and Mendoza wins.”
“Easy for you to spout out all the self-help bullshit.”
“Actually, it isn’t.”
Her brows came together in confusion as inquisitive eyes met mine. “What do you mean?”
In that moment as the hellish ghosts of my past closed in around me, the pressure to breathe had my lungs feeling like a squeezed accordion. I had never spoken of my rape—the actual words had never left my lips. My father knew because he had witnessed the end, and Break- neck knew because he had experienced the aftermath. It had been a horrible secret we kept from my mother and brothers.
Annabel was a complete stranger to me—someone I’d known less than forty-eight hours. The reason why she deserved to know and my blood family didn’t escaped me. But in my heart, I also knew there was a purpose to telling her. In the macabre room splattered with blood, it seemed almost effortless to unburden myself of the sordid details I had tried to bury for so long.

About the author:
Katie Ashley is the New York Times and USA Today bestselling author of The Proposition Series, Runaway Train series, and several New Adult and Young Adult titles. She spent the last eleven years teaching both middle and high school English, but is now a full-time writer and currently lives outside of Atlanta.


Kobo
Posted by Naughty and Nice Book Blog at 9:00 AM