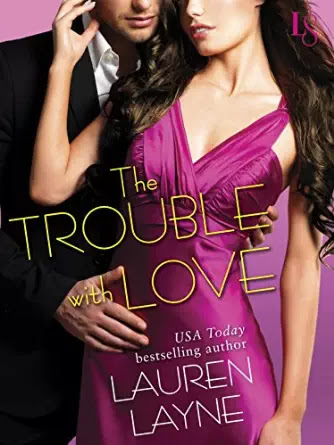 As Lauren Layne’s salacious Sex, Love & Stiletto series returns, a jaded columnist discovers a steamy way to get over an old flame: falling for him all over again.

As Stiletto magazine’s authority on all things breakup-and-heartache, Emma Sinclair writes from personal experience. Five years ago, Emma was Charlotte, North Carolina’s darling debutante and a blushing bride-to-be. Now she’s the ice queen of the Manhattan dating scene. Emma left her sultry Southern drawl behind, but not even her closest friends know that with it she left her heart. Now Emma’s latest article forces her to face her demons—namely, the devilishly sexy guy who ditched her at the altar.

After giving up everything for a pro-soccer career, Alex Cassidy watches his dreams crumble as a knee injury sidelines him for good. Now he’s hanging up his cleats and giving journalism a shot. It’s just a coincidence that he happens to pick a job in the same field, and the same city, as his former fiancée . . . right? But when Emma moves in next door, it’s no accident. It’s research. And Alex can’t help wondering what might have been. Unlike the innocent girl he remembers, this Emma is chic, sophisticated, and assertive—and she wants absolutely nothing to do with him. The trouble is, Alex has never wanted her more.


Emma and Cassidy's story is one of my favorites so far! I love all the sexual tension between the two of them throughout the book. Since this week was a Lauren Layne marathon for me, I enjoyed the books even more because I was able to read them one after the other. I was addicted to say the least. I may have even been reading some while stuck in traffic today (shhhhh) because I couldn't get enough! I wanted to know so bad what happened next.. Who doesn't love Alex Cassidy or any of the guys in the series! But Emma and Alex stole my heart.. And of course I'm obsessed with Lincoln (who isn't?) but honestly, Not many people could get through a situation like Emma and Cassidy and come out on side they did. The way Lauren tells their story is amazing and heartfelt. I'm kind of sad my Stiletto marathon is over! Did I mention I want to work there just so I can be part of Lincoln's black book???

I highly recommend this book and everything by Lauren Layne to be honest! Five stars from me :)

Posted by Naughty and Nice Book Blog at 3:47 PM