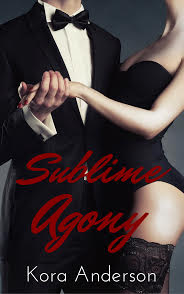 Annalise flees her home in England after a series of events broke her. She’s intelligent and can take care of herself, but when she can no longer afford her steep tuition at Yale, she utilizes her previous job as a ballerina, and she gets a job at a high class strip club. Annalise meets a handsome and mercurial stranger one night at work, and after finding out that he’s the owner of the club, she tries to distance herself from him. She can’t be distracted by a man. Eventually, even her job as a stripper isn't enough to sustain her dream of a medical degree. When Kason presents a deal that Annalise cannot refuse, the two begin a relationship. Kason is a dominant and he evokes deep desires that Annalise has kept buried deep.  Kason protects and cares for Annalise, and the two have a life together, but both of their pasts hover over them. Kason hunts in Annalise’s past and can’t help himself from fighting her battles. They begin to mend each other, but the damage has been done and the Pandora’s box that is Annalise’s past has been opened.

About three chapters in, I felt like I was reading Fifty Shades of Grey all over again.
Not in a good way... There were just SO many things that were so similar. From the NDA, to the crazy Ex, the house keeper, security, millionaire, to her having a room at his house with a new wardrobe.  There was not really anything "original" in the book. I kept reading hoping that something would happen to keep me interested. Well, that did not happen until the last chapter literally. At that point I did want to know more about Annalise and what other
secrets she was keeping from Kason. At that point the book was over. I also want to add that there were so many misspelled words and grammar issues that I noticed on at least every couple pages.

I will attempt to read the second book that comes out because I know this one was her first and I am hoping maybe after her taking some suggestions from others, book 2 will be much better!