REVIEW ~ TO THE STARS by Molly McAdams 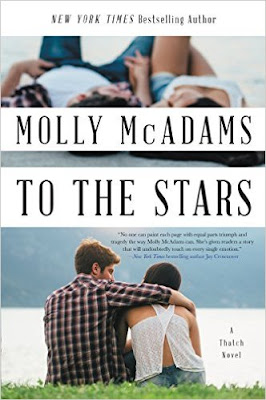 In the second standalone book in New York Times and USA Today bestselling author Molly McAdams’ Thatch series, Knox Alexander must convince his long-time love Harlow Evans that they’re meant to be together.
He promised to wait for her.
She told him he was wasting his time.
Not waiting for him ended up being the biggest mistake of her life.
When they were younger, Knox Alexander swore to Harlow Evans that he would wait for her to turn eighteen so they could be together. But that was two and a half years away, and Harlow couldn’t ask him to give up all the fun and thrills of going away to college for her. As the years passed, Knox remained a constant in her life but when her eighteenth birthday came around, Harlow’s heart belonged to someone else.
Every day for the last four years, Harlow has been haunted by that fateful choice. And though he may appear unaffected by what happened in their past, Knox has always tried to fill the void Harlow left. But when he comes stumbling back into her life and refuses to leave, will Harlow finally let him into her heart…?


“One day, Harlow Evans, you will be mine. I will wait for you.”

Knox Alexander met Harlow Evans at a concert. They spent a great deal getting to know each other and having a good time rather than listening to the concert itself. Here’s the catch, he’s 18 and she’s barely 16… He made a promise then to wait to her. She didn’t want him to waste his time. They both knew they loved each other nothing could come of it until she turned legal. Knox and Harlow remained friends but acted like so much more. They would talk, text and hang out every so often. He would even send her flowers. Harlow wanted him to live his life since he was a college student. Knox dated, but his heart belonged to Harlow.

When she turned 18, Harlow got that phone call she forgot was coming. It wasn’t a happy one. Knox waited all those years for her. But Harlow didn’t.

“Knox had waited for me I hadn’t waited for him…and now it was too late.”

“Not waiting for you was the biggest mistake of my life.”

When Knox found out she didn’t wait for her his life was turned upside down. His life no longer had meaning. His heart belonged to Harlow. He was living life but just going through the motions. Working as a firefighter, living with his best friends Deacon and Graham and jumping from faceless women night after night. No one could ever replace the one that got away.

“The boy I’d fallen in love with had turned into my monster.”

Not a day that goes by that Harlow regrets the decision of not waiting for Knox. Even though she has moved on and is married to Collin, it is not the glamorous life that she lets everyone to believe. Collin is successful, wealthy and very attractive. He cannot to anything wrong. So if she were to tell people of what really happens at home, there will definitely be repercussion to it. He is a mixture of hot and cold. One minute he can be as sweet as pie then turn around and be a hideous monster, then bribe her with gifts to make up for it. Harlow has never dreamed of this. Collin was never this monster when she first met him. He showed his true colors when it was too late to turn around. Harlow is in too deep to get out now. In order to save the ones she loves she must continue this charade. But not a day goes by that she thinks of Knox and the regret she has for him. She doesn’t love Collin. Only one person has her heart and she let him go a long time ago.

“My love for him died the moment he finally crushed my spirit, and I’d just being going through the motions and praying for better days.”

Harlow is tough as nails to endure half of the crap that he put her through. I know I wouldn’t be able to put up with it. But knowing she did it to keep her family safe is very admirable. I’ll be honest though, when Collin says “Don’t show your pain,” every single time he hurts her just got to be a bit much for me. It just got a tad repetitive.

“Why would anyone waste their time only loving someone to the moon when they could love them to the stars.”

Knox and Harlow cross paths coincidentally at a coffee shop and he instantly knows something is wrong with her. He figures out what’s going on with her. Proves that he still knows her, even after all these years. Even after breaking his heart all those years ago he still wants to help her. Of course she denies her but Knox is very persistent. Although all those years, it seems like time hasn’t kept them apart they still have that connection. He is determined to not let her get away again. Knox will keep Harlow safe, even if that means putting himself at risk.

Will Knox and Harlow have their second chance? Or will Collin be too much of a problem? Will Harlow be able to escape the dangers or him once and for all? Or will he take advantage of her “love” and hurt her family to get back at her? Will Knox be able to get her away from that monster?

I loved Knox in this book and loved seeing his love and determination for Harlow. I felt for him and was sad for their situation. Molly truly captivated the feelings of the characters in this book. I was able to feel was they were feeling and what they were going through, unfortunately. I was rooting for Knox from the very begging. I admire and commend Harlow for what she had gone through for her family. and what she did in the end. And I love Knox for truly holding on to their love. For going back for her and always being there for her. It proves to show that true love does exist.

This review was done by Jenn. I received an advanced copy for my honest review.
Posted by Naughty and Nice Book Blog at 10:00 AM