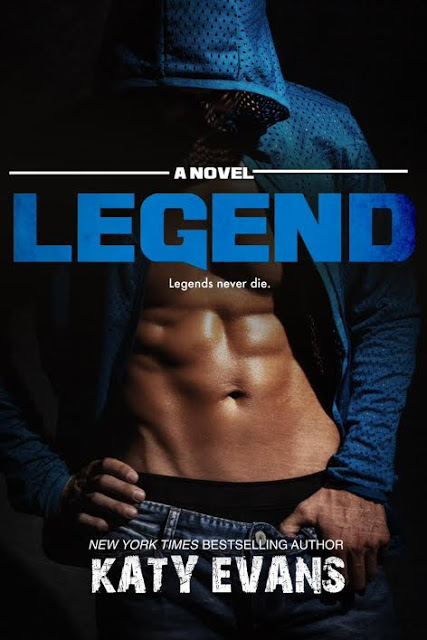 Can love really conquer all?—Book Six in Katy Evans’s breakout New York Times bestselling series that began with REAL.
Maverick “The Avenger” Cage wants to rise to the top and become a legend in the ring. Though he keeps his identity well guarded, he’s known on the fighting circuit as the new kid with a chip on his shoulder and a tattoo on his back that marks him as trouble. He’s got a personal score to settle with the Underground’s one and only Remington “Riptide” Tate.
As Mav trains, he meets a young girl—the only other new person in the town—and sparks fly. When things get heated between them, he finds out she’s none other than Reese Dumas, the cousin of Remington Tate’s wife. A girl who’s supposed to root against him and a girl he’s supposed to stay away from.
But Mav fights for the woman in his heart and the monsters in his blood. The world’s eyes are on them, and the victor will go down in history as the ultimate fighting champion—the ultimateLEGEND. 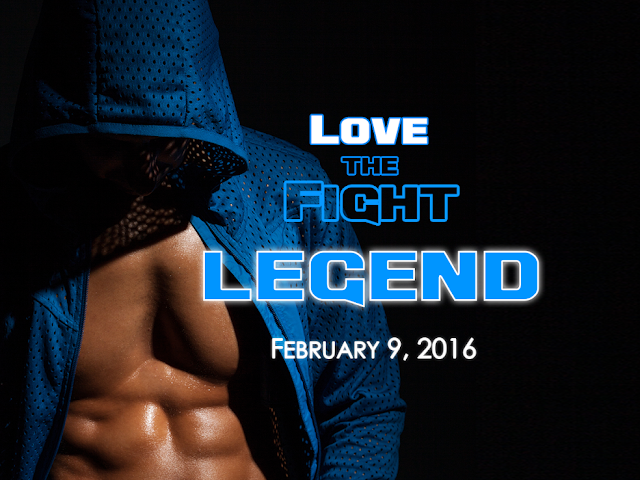 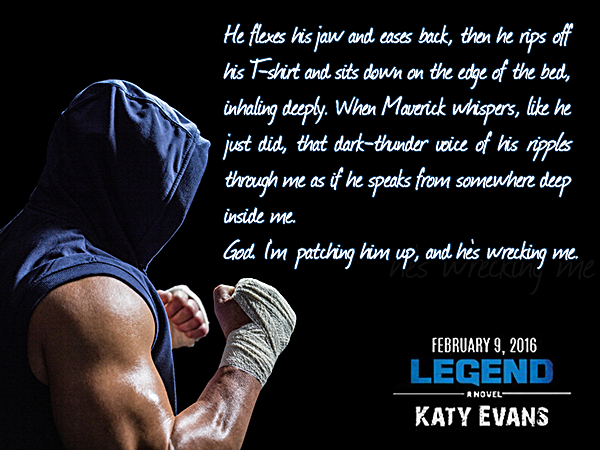 I can't tell you how incredibly rare it is to read a series and feel the final book is as strong, if not stronger, than the first. Real was a rollercoaster rush of amazing emotions. At times I struggled to feel that high again ~ until now.
LEGEND is everything. The magic I felt when I first read REAL, on April 18, 2013, has intensified with time and growth. These characters are electric and this story is incredible. INCREDIBLE! Katy Evans, you melt my heart. Thank you.


The song, Everything by Lifehouse, is one I've always associated with Real. Almost three years later and it still fits perfectly.

One Word: Bittersweet.. I didn't want to get to the end of this book because I know its the last in the "Real" series and I didn't want it to end. Katy Evans ended this series in the best way imaginable in my eyes.

I love the connection Reese and Maverick have! Ladies, just when you thought your heart belonged to Remy, Let me tell you... Maverick stole my heart from the first chapter!!! I love the story of his Dad and their Non-relationship,and how it makes him feel. The past destroys some people. Not Maverick.. Maverick is determined to be the Legend and pushes and pushes toward his goal. LOVE LOVE LOVE the bond and relationship him and Remy had. Remy was more of a Father to him than his own. Oh and I can't forget Oz! I loved him and I loved how Remy tried and tried to help him but it was not until the end that he realized he wanted to help himself.

Reese!! I loved her! She was working on trying to find herself. She has some issues she was dealing with and came to stay with Remy and Brooke to help care for Racer. Those three words when Maverick walks into the Gym but did not have a membership yet.."He's with me" .. Then their amazing story comes to life and Katy couldn't have told it any better than she did!

I am so so sad to see this series end, but its going out with a bang! Easily on my favorites list for 2016!

Where do I begin. Katy Evans started this series with REAL and made us all fall HARD for Remy. He is the ultimate book boyfriend, the ultimate lover, let's not forget, the ultimate fighter.

In Legend, we are introduced to Reese Dumas, who heads off to Seattle to help babysit her cousin Brooke's three year old son, Racer, who as we all know, is Remy's son.  Reese is trying to figure out who she is. To find her own identity. So traveling with her cousin and her husband couldn't have come at a better time. Reese is trying to make changes in her life, one would be getting in shape. She wants to lose a few pounds, but she is doing it for all the wrong reasons. She is doing it with the hopes of getting her friend, Mile's attention. The funny thing is, she caught someone's attention, but it wasn't Miles', it was Mavericks.

Maverick, is a loner, the only people in his life are his mother and two friends from back home. No on will give him a chance to train with him.  Every door he knocks on, they are shut in his face because of who is father is. But he refuses to allow his father's past to define him. Things seem to change for him when a stranger is kind to him. One act of kindness changes the path Maverick is on. One simple gesture made a world of difference and helped set Maverick on the path to become a LEGEND in the Underground Fighting World.

What happens when Remy meets Maverick in the ring? Who will Reese cheer for, who will she choose? Does her loyalty lie with the Tate family? Is blood thicker than water? Who will be the last fighting standing at the end of the champion match with their hand held high?


The ringmaster stands between us, lifting each of our arms, and fucking crazy Remington Tate is grinning over the top of his head at me.

You will be quite surprised as to what happens between Remy and Maverick. I would have never seen it coming. Katy pulled me in and grabbed a hold of my heart. With every turn of the page, I held my breath waiting to see what would happen next.

If you ladies LOVED Remy, then you are in for quite a ride with Maverick. He will steal your heart, with his steal gray eyes, and his life story. Maverick will become a LEGEND on his own and fight like hell to get out from behind the shadow of his father. Let's not forget about Reese. She was an amazing heroin in this book. I adored Reese.

Katy Evans steamrolled the indie world a few years ago with the first book in this series, REAL, and couldn't have ended this series any better with the LEGEND. I bow my head to Katy, as she herself is a LEGEND !!!! 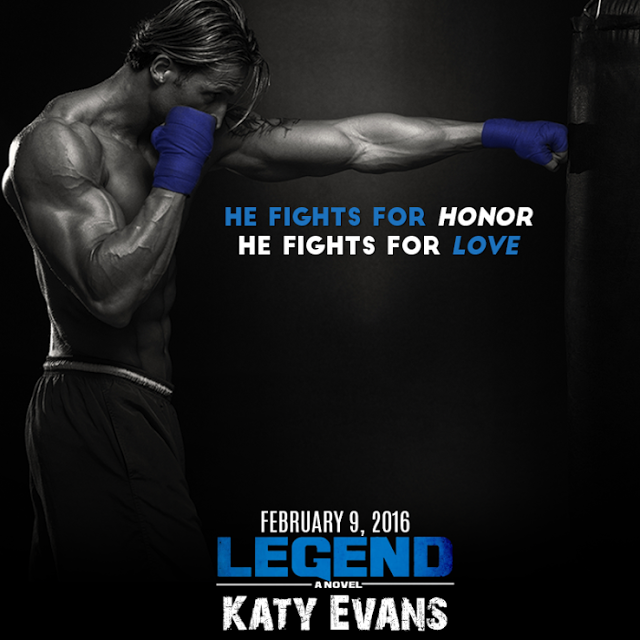 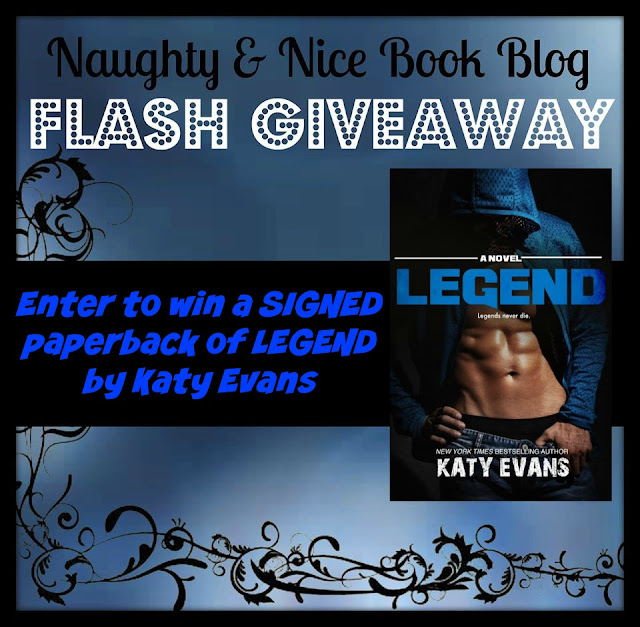 a Rafflecopter giveaway
Posted by Naughty and Nice Book Blog at 11:32 AM