My name is Brad Ellis. You think you know me. You don't know shit. I've been a hustler my entire life. I work three jobs to get what I want, but I'm not there yet. I live with a roommate that has been my best friend for over a decade and we make it work, but life is hard. It's always been hard, until I met Megan Walker.

Sometimes people come into your life and you think it's just for fun and games. Then they turn into one of the most important people. Don't take anyone for granted, because as soon as you do they will be gone.

I pull my phone out and see I have a text from the ginger I was telling you about.

You haven’t responded to my message about me getting married. I know you’re happy for me you whore. Now tell me how much.

I laugh out loud at the text and then put my phone back in my pocket. Yes, I let her call me a whore. I’d call her one too, but I don’t think she’d let me. We text daily. I wonder if her fiancé knows that? Maybe I should tell him. No, no. I know what we are and we’re friends. She’s a good person and she deserves to be happy. I sometimes wish it could be me that made her happy, but she’s a little out of my reach. That doesn’t make sense? Here’s the thing, people are happy to fuck me, but they think I’m just a painter and personal trainer and that’s all I’ll ever be. Megan likes me for me, I know that about her, but my personal issues come up when I’m with a woman like her. She’s confident, smart and funny as hell. She’s a lawyer and sometimes I can’t keep up with her. Whenever that happened in Vegas I’d just pull her pants off and everything was right with the world, but you can’t make a life together like that, can you?
You know when you meet someone and you just click?  We did that. That’s why we stayed friends, we like each other. I liked fucking her too, but I guess that ship has sailed.


When RL announced that Brad "Meat" Ellis was getting his own book I couldn't wait! I mean who wouldn't want to read all about a guy named Meat right? Everyone has a story and I couldn't wait to get my hands on his. RL does a fantastic job bringing his character to life. Yes he's a walking sex on a stick who models and stuffs his manhood with hot dog buns. But he's also hardworking and determined just like every other person in this world. Aside from his modeling job, he works two jobs to makes ends meet while also trying to save up to open up a gym with his roommate and best friend Duncan. I couldn't help feel bad for him but it's a daily struggle a lot of people go through. But with his best friend at his side they are both able to trek through to pursue their dream. Don't fret, some of their antics will have you laughing out loud, trust me. Duncan and Brad together are quite the character.

"You think you know someone and then you find out an entirely new set of facts that changes things to such a degree that you don't know where it leaves you."

Brad was so hung up on Megan when they had their fling in Vegas. He thought she was a fantastic person, and though they talk all the time he still thought about her. When she told him that she was getting married it all became real for him. Their relationship was bound to change. But when the news broke that she was Megan the lotto winner, it threw him in tale-spin. He and Meagan talked about everything and this was never brought up. Was everything about their friendship, about what he knew about her a lie?

"Fear can do strange things to people. I've always been afraid of this because i didn't think i was good enough."

Now Brad has his fair share of ladies and can get whomever he wants but he always has one constant, waiting in the wings you could say.... Madison. She was his fall back and always up and ready for him no strings attached. They have been friends for years and they both know what to expect from each other. They both know what each other likes and not to ask any questions. But what happens when feelings start to get involved? Is it worth risking your long lasting friendship over? This is a complete internal struggle for Brad. His past and his current situation are causing his to doubt himself heavily. This is causing him to feel things he hasn't felt before and pull away. It's so hard to see Brad go through this, I never would have thought I'd see a soft side of him but yet going through such turmoil. They both come from different worlds it doesn't help the situation at all. Can Brad find his way through his doubts? And see himself for who he truly is? Or will he be his own demise? Can he and Madison get through this hiccup? Can his relationship with Megan be repaired or is that one down the drain? RL does a wonderful job in continuing to put us in a whirlwind of emotions while reading this book. I didn't expect anything less. I went from feeling bad for Meat, to laughing hysterically, to swooning, to wanting to smack his head. I was glad to see Megan make an appearance in there. I missed her. The ending was a great way to end it!!!! I'm just disappointed that this was a short one, I wanted more Meat! 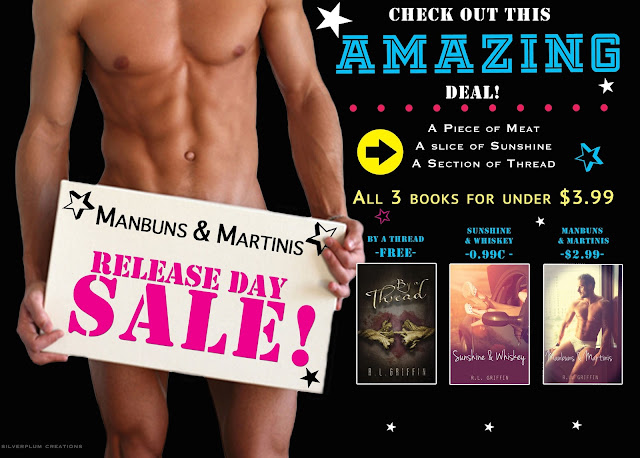 Sometimes the best things in life come from the unexpected. So if you lower your expectations, then you’ll never be disappointed. Sound cheesy? It is, but it's also true. Clichés come from a grain of truth…like a man with a Porsche is compensating for something, or once a cheater always a cheater—you get the idea. Sorry, I digress. I'm supposed to be telling you what this book is about.

I'm Megan Walker, a lawyer at one of the hottest boutique law firms in Atlanta. I'm on the fast track to making partner and have my entire life planned out...or I did.
We all know how that goes, right? Best laid plans and all that.
Life just threw me a couple curveballs, so I've set out to take things into my own hands. By throwing caution to the wind and getting out of my A-type personality bubble, I'm learning more about myself than I have in my twenty-seven years.
Sound like a chick flick, doesn't it?
It’s not.

R.L. resides in the Atlanta area with some cool dudes: her husband, son and two crazy dogs.  She was born and raised in the South.  She attended Georgia Southern University and moved to Washington, D.C. to intern in the United States Senate during the impeachment trial.  Falling in love with the city, she went to law school at American University, Washington College of Law.  By A Thread is R.L.’s second book, but is the first in a series that got her back into writing after a ten year hiatus.  She writes anything from romantic suspense to psychological thriller to romantic comedy. One of the things that readers always say is they never know what kind of story they will get from R.L.

Why do I write?
I seriously can't sleep! Once the characters get a hold of my brain it's hard not to get it all out. I just write it down. I wrote my first book as an escape and to de-stress from law school. (i know this sounds crazy!)

What do you like to read?
I love reading, have since I learned how.  My parents would take me every weekend to the book store or the library.  I had every single Babysitter's Club book.  I read three books at a time and I LOVE all the new adult fiction being published.   I like any book with interesting characters. I like a good story and authors who bring their characters alive --well they inspire me!

Are you a serial reader?
My friends think I'm nuts. Yes, I love to read on the treadmill, in the middle of the night, on the weekend and even listen to audiobooks as I tour the state of GA for my real job! I am on my 2nd kindle in two years. First one just gave up and said I'm done reading!  When my first kindle broke my husband was excited because he thought we would talk again, I just bought another.

Your books are Fiction Right?
Of course, but I've been known to take a few things from life experiences.  Also, I can't really curse in my real life (that much), so I do it in my books. (My mom can deal with it better that way!)

Posted by Naughty and Nice Book Blog at 8:09 AM