BLOG TOUR ~ All That's Left to Hold Onto by Ella Fox 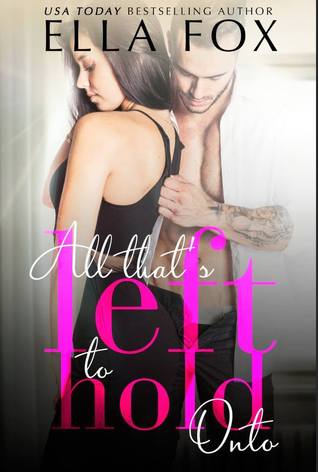 
When Ronan Sharpe unexpectedly left Colorado for parts unknown, he took a piece of Keely Carmichael's heart with him.

After leaving his hellish roots behind him, Ronan found contentment when he started over. Thoughts of the past had been pushed down for so long; he hardly thought about it at all.

He intended to keep it that way.

When unexpected circumstances force Ronan to return to Colorado, the Keely he finds is no longer the adolescent girl he remembered. Torn between desire and fear, Ronan struggles with his feelings for Keely and his need to escape the town that scarred him so deeply years ago.

Letting go is all Ronan's ever known. Will he realize a life with Keely is something he should hold onto at any cost? 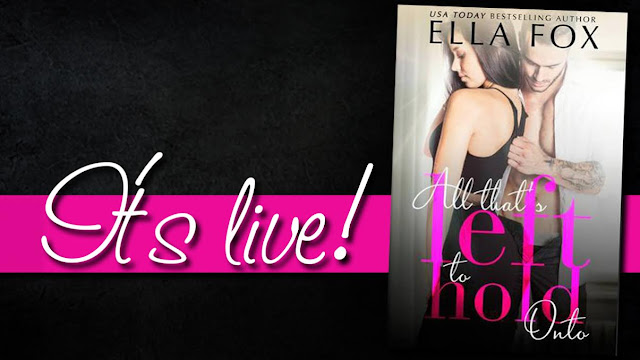 Letting go is all Ronan's ever known.
Will he realize a life with Keely is something
he should hold onto at any cost?

Find out in All That’s Left to Hold Onto by Ella Fox! 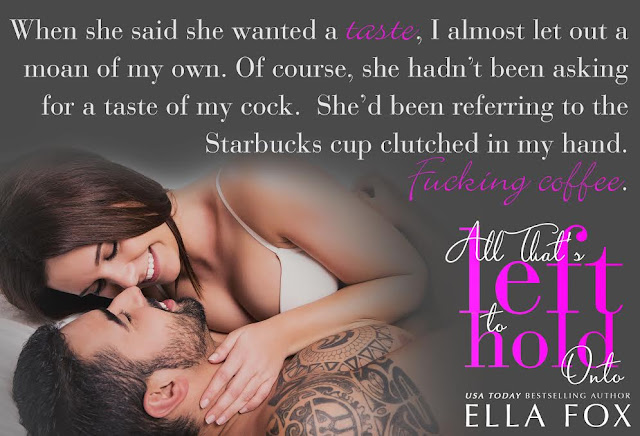 Ronan had a terrible childhood and an even more horrible "brother" who was mixed up is some pretty terrible things. He decided to leave town and never look back but not before saying goodbye to Keeley.

Keeley was younger than Ronan and had a major crush on him. So when he said goodbye she was heartbroken, but she understood completely. Keeley's sister and Ronan's brother were married and we're both two completely twisted individuals. Several years later Ronan gets a call that will change his life forever. Ronan and Keeley were reunited to deal with the deaths of both of their siblings. This is an incredible story of love, loss, fate, and karma.

There are so many unexpected twist that happen.  I loved the way the book was written and I fell in love with all the characters especially Ronan. I highly recommend putting it on your TBR list! 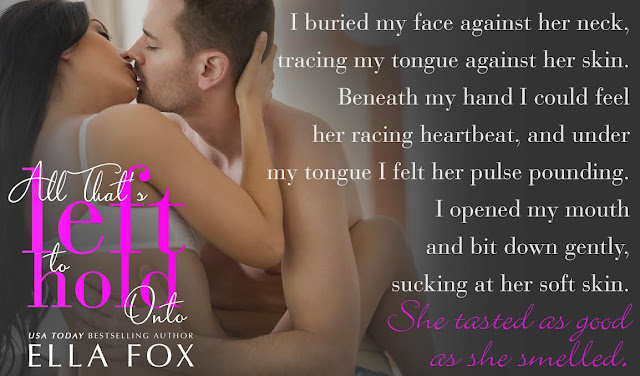 There were nasty looking bruises on his cheek and jaw, his lip was swollen and his knuckles were scraped and bloody.  The instant I got a good look at his face I knew something was horribly wrong.  It only went downhill from there.

My attempts to contain my panic weren’t working.  Choking back a sob I blubbered, “Why do you have to go?”

The anger was all but pouring off of him.  Not toward me—he’d never once been angry with me. I knew anger though, and it was more than obvious he was furious about something. A permanent grimace seemed to have set up camp on his face.  For him, it was highly unusual.  Even in the toughest of times, he kept his cool.

Suddenly, he wasn't calm at all.  He was angrier than I’d ever seen him.  It was obvious he’d been in a fight, but it didn’t change his status as the most attractive guy alive, in my opinion.

I saw his jaw clenching and unclenching which I figured meant he was trying to control himself.

“Because this piece of shit town is like a fucking cancer,” he spat.  “I’m so done with the crazy assholes around here. People like us aren’t normal—we’re the freaks for trying to be good people.”

I didn’t know how to argue with his words.  He wasn’t wrong—there was a lot wrong with many of the people in our town. Most of the crazy people were either my family members or his.  I knew it and so did he.  There wasn’t a response to erase the reality of the kind of people we dealt with.

“Are you going alone?”

His hands clenched into fists at his sides as he nodded stiffly. “Yes.”

“Even though you live with—”

His hand shot up into a stop gesture to keep me from finishing the sentence.

“Don’t say her fucking name. If I never hear it again, it’ll be too soon. I don’t live with that crazy bitch anymore.”

I couldn’t stand her so it wasn’t like I was going to push. She was an evil troll. If he had to go, I was glad he wasn’t taking her with him.  It would’ve made me ill. She pretended to be sweetness and light when he was around but it was nothing but a charade.  She was terrible.  I was glad he wasn’t taking her, but the fact he wouldn’t say her name told me his leaving was somehow her responsibility. I hated her more than ever.

“Where will you go?”

He gestured back over his shoulder toward the street with his thumb.

“Wherever my car takes me once I pull out,” he said.

I couldn’t imagine life without him, nor did I want to. Not only had he been my crush for as long as I could remember, he was the only person who ever really listened to me.

“Will you ever visit?” I asked hopefully.

He was shaking his head in the negative before I’d even fully finished asking the question. I knew he wouldn’t. The bone-deep hatred he had for everything about where we lived was stamped all over his face.  I wanted so badly to know what, exactly, had sent him over the edge, but when I asked, he’d refused to tell me.

It sucked being fourteen because he treated me like a kid.  My age said I was a child, but I was so different than any of my peers it wasn’t even funny.  Because of this, they teased me often, referring to me as Granny Carmichael.  I hated it.  It wasn’t as though I’d had a choice.  My childhood was over the moment my mother got sick.

His expression softened when he looked me over. “You need to get back inside before you get pneumonia.”

The frigid Colorado air wasn’t even making an impression on me until he pointed it out. I realized my tears were leaving cold trails on my face, but I couldn’t walk away. All I cared about was how much I didn’t want him to leave.

“I don’t care about the cold or getting pneumonia.  I don’t want you to go!” I cried anxiously.

He hugged me then, his strong arms wrapping around me to give comfort.  I hadn’t hugged him since I’d been much younger—probably five or six.  Those hugs had mostly involved me wrapping myself around one of his legs.  This was different. I wrapped my arms tight around him and cried against his chest, holding on for as long as he allowed me to.

“I’m sorry,” he said as he ended the embrace and stepped back. “I have to leave.”

Knowing my denial and resistance weren’t going to make any difference, I swiped at my tears as I nodded.

“I’ll miss you too,” he replied softly.  “You’re one of the few good people here.”

My heart galloped in my chest. I loved him for saying what he did—but hated that it came at such a horrible price.  Losing him was unbearable.

He turned as if to leave, then stopped.  Spinning back my way, he stared at me intently for a few moments before he spoke again.

“You’re so much better than any of these people. Don’t ever let them change who you are. The world needs a lot more you and a lot less them. No matter what anyone tells you—you’re perfect.  Got it?”

I nodded as I wiped at the tears running unchecked down my face.

He hugged me again, very briefly. My heart skipped a few beats when he dropped a kiss on top of my head.

“Don’t ever forget your worth—not even for a minute,” he murmured.

When he let go, he said nothing else.  He just turned and walked to his car.  As he went, the chill in the air suddenly took hold of me.  Hugging my arms around myself, I watched as he got into the car, turned it on and then pulled out of my driveway.  He looked at me one last time before putting his hand up in a goodbye gesture.  I did the same.  A few seconds passed before he put the car in drive then sped off into the night.

I stayed outside for two or three minutes, hoping against hope he would change his mind and come back.

Hours later when I got into bed, I prayed fate would bring him back one day.  I said the same prayer most nights for a long, long time. Eventually I had no choice but to accept reality.

Hell would freeze over before he returned. 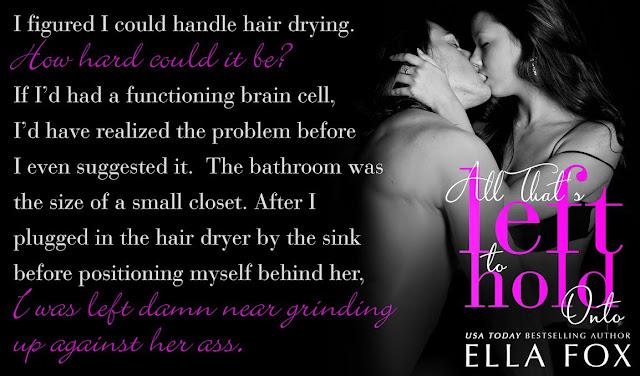 Ella Fox  writes like a woman possessed whenever she gets the chance!  She is the author of The Hart Family Series, The Renegade Saints Series and The Catch Series.

When she’s not writing, Ella indulges the gypsy in her blood and travels the country.  Ella loves reading, movies, music, buying make-up, reading Tmz, Twitter and pedicures… not necessarily in that order. She has a wild sense of humor and loves to laugh.  Her favorite thing in the world is hanging out with her family and watching comedy movies.

a Rafflecopter giveaway
Posted by Naughty and Nice Book Blog at 10:30 AM