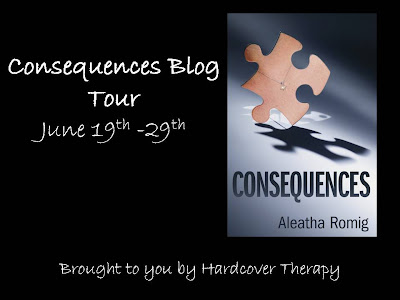 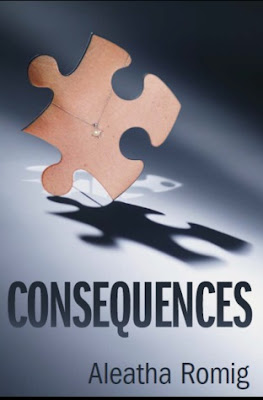 
Besieged by memories of a brutal abduction, Claire Nichols wakes in an unfamiliar bedroom, within a luxurious mansion. Her recollections have one common denominator, the man she just met, Anthony Rawlings.


Unbeknownst to Claire, for a very long time, she has been within Anthony’s sights. Many of the pivotal events in her life occurred, due to his sinister manipulation. Every action has a consequence, and his actions result in their chance meeting.
More than a psychological thriller, Consequences is a vivid story of one woman’s struggle to survive incomprehensible circumstances. Every aspect of her being suddenly depends upon the tall, wealthy, dark haired, dark eyed businessman. Anthony Rawlings is known to the world as prosperous, benevolent, and kind. Claire quickly learns that he can also be a menacing controlling captor.

With few options but concession, Claire attempts to earn her freedom, while enduring a hellish existence that truly appears perfect. Persevering tests and trials, she struggles to retain her pure values and beliefs. Encouraged by memories of a loving upbringing, she gains strength in the simplest of joys: solitude in nature and good in the face of evil.

Utilizing vivid detail, this 167,000-word novel unfolds like a movie, before the eyes of its readers. From the opening criminal abduction, through twists and turns, to the unlikely romantic thrills, the suspense climaxes as Anthony’s motivation becomes evident.

Anthony and Claire must decide if they will stay true to one another, or allow preceding actions to result in justifiable Consequences.


Claire Nichols graduated from college with her degree in Meteorology and was a weather forecaster but with the recent buy out of her station, she was laid off.  Claire was minding her own business while bar-tending at a local bar, "Red Wing" when a good looking guy approaches the bar and orders a drink.  The handsome guy could not take his eyes off of Claire the entire night.  This handsome guy's name is Anthony Rawlings.  Anthony asks Claire to have a drink with him and against her better judgment, she agrees to have a drink with him when her shift ends.

Anthony Rawlings (a/k/a Tony) appeared to be different from any other man that Claire had met. Yes, indeed he is different. Anthony is a sadistic crazy ass lunatic that gets pleasure from causing pain to others.  To say that he was cruel to Claire is an understatement.  He was controlling, demeaning, abusive, demanding, dominant, just plain TWISTED and DEMENTED!!!!
Now let’s discuss the storyline. Anthony Rawlings kidnaps Claire and convinces her that she signed a contract to become his “personal assistant” and I mean she was to personally assist him in ANY which way he demanded.  Whether it was on her back or on her knees. I think Claire was just shy from having a collar around her neck attached to a leash.  Anthony advised Claire that she was “HIS” until she worked off her $215,000 debt that Anthony had paid. Claire became a prisoner in Anthony’s home. The only interaction she had with people were with his house staff and Anthony.

Thank the lord that Claire would think back to memories that her grandmother had instilled in her. I think that is the only thing that kept her sane. “It is not the circumstances that makes a person a success.  It is how that person responds to those circumstances.”  Her grandmother believed that every situation could be handled better by the right attitude.


Claire was told the rules in which she had to obey time and time again.  Anthony drilled them into her head.
Rule #1: Do as you are told
Rule #2: Do not divulge personal information
Rule #3: Actions have consequences
Rule #4: Appearances were of vital importance
Rule #5: Public failure was not an option.

Claire walked on egg shells all the time with Anthony.  She never knew if she would do something to irritate him and she feared if she made him angry, she would be punished.  After being with Anthony for several months, she began to develop feeling for him. At times, Claire questioned her sanity.  How could she be having feelings for a man that causes her this much pain?  I myself was baffled by her feeling for Tony. Granted, there were times throughout the book where Anthony would be affectionate, gentle, loving and caring with Claire.  Under his dark exterior and blackened heart, Anthony was developing feelings for Claire as well.  Feelings that he wasn't sure were possible.


“Claire, the other night you asked if I cared about you.  Honestly, with our initial arrangement I never intended to.  But, without a doubt, I do.  Do you care about me?  Do you enjoy being with me?” ~ Anthony Rawlings
The relationship between Claire and Anthony is bizarre to say the least. Anthony decides if and when Claire may leave the house, speak on the phone, attend engagements, etc.  Claire’s life is dictated and controlled by Anthony.
Throughout this book, my head was spinning. I gave myself a headache from shaking my head back and forth and saying Oh My God, he did not just do that, or what the hell is she thinking.  Consequences is a book that is in a league of its own. When I got to the end, I was like OH MY GOD... WHAT THE FUCK!!! I could not wrap my head around it, I still can't believe what happened to Claire at the end of the book. Obviously, I am NOT going to say what happened, you will have to go through this torment just like I did. All I will say is, I hope the REVENGE that Claire gets will be sweet.  I am going to read TRUTH (BOOK #2) and pray that is what Claire will get.  I will leave you with this...
Claire is consumed with the memories of what Anthony did to her.


“Two and a half years ago, she had one goal – survival.  Now she had a new one – revenge. Mr. Anthony Rawlings would learn that his actions have consequences.”
This review was prepared by Heather.

Author Bio:
Aleatha Romig voted #1 "New Author to Read" on Goodreads, July 2012 through now! She is a "Published Author's Network" member of the Romance Writer's of .
She has lived most of her life in , growing-up in , graduating from , and currently living south of . Together with her husband of twenty six years, they've raised three children. She works days as a dental hygienist and enjoys spending her nights writing. She also likes to spend time with her family, friends and patients. Her pastimes include exercising, reading and writing.


Aleatha enjoys traveling, especially when there is a beach involved. In 2011 she had the opportunity to visit , to visit her daughter studying at the . Her dream is to travel to places in her novels and around the world. CONSEQUENCES, her first novel was released in August 2011 and has sold over 20,000 copies. TRUTH, the sequel was released October 2012 and has surpassed 10,000 copies in less than 3 months!

Aleatha originally published through self publisher Xlibris a subsidiarity of Author's Solution/ Penguin Publishing. In October of 2012 she re-published on her own, a true Indie Author. Later that month she published Truth through Romig Works. Aleatha is happy to be represented by Danielle Egan-Miller of Browne & Miller Literary Associates.

Today we would like to welcome the fantastic Aleatha Romig to the blog!  Thanks so much for being here today!

What inspired you to write Consequences?

I’d always wanted to write a book.  It was a bucket list type thing.  In 2008 my husband lost his job, it was in construction materials and the economy tanked! He began working a third shift job.  Our two oldest children were off in college.  Our youngest was going to bed about 8:30.  That left a lot of alone time.

I had this idea of a woman in a room... I decided to sit down and see where the story would take me.  I didn’t write Consequences to publish.  I wrote Consequences as therapy or escape from my life.  I could totally manipulate and control the lives of these characters.  It was more than I could do for myself.

How did you come up with the storyline for Consequences?

I had the “vision” or “thought” of the opening scene.  I didn’t know any more, but wanted to learn more.  That’s how it started..


What was the hardest part of writing Consequences?


The hardest part was deciding how much detail to put in my manuscript. My original draft had more detail.  It was so disturbing to my mother and sister-in-law that they couldn’t read the story.  So, I decided to employ more of the “fade to black” technique.  Honestly, I still have people who think my reading is too disturbing and others who want more detail.  I’ve come to the conclusion; you can’t please everyone – so please yourself.

What books have most influenced your life most?

What author has influenced you the most?


I belong to the Indiana Romance Writers Association.  In our local chapter there are many talented writers, and I’ve learned and been influenced by these woman in many ways.  Most of them have much more experience than I.  Their willingness to share and encourage has been invaluable.
In a long distance, no direct influence kind of way, I will say E.L. James.  Not because I found Fifty Shades amazing... it was good.  But, she opened the door to “different books” hitting the mainstream.  Consequences Series isn’t erotic; however, it is dark.  I breach subjects that previously were taboo.  I’m not sure that my series would have received the acceptance it has, pre Fifty Shades.

What were the challenges in bringing Consequences to life?

I was and am so inexperienced.  Consequences was published in August of 2011 by a self-publishing publisher.  In October 2012 I rereleased Consequences completely Indie.  Just last week I entered an agreement with a copy editor.  I’d had Consequences and Truth line-edited... and as many have pointed out, there are still mistakes.  Being self-published I’m not accustomed to having someone tell me “consider deleting” or “consider re-wording” or anything else...  I’m excited and scared.
The truth is, I believe I have wonderful stories and want to do anything and everything to bring the best version to the world.  To date Consequences has sold almost 50,000 copies! That amazes me!

How would you classify Consequences? I mean its not exactly romance
when people ask me how to best describe it I say it's kinds sorta like the TV show Revenge (which is my current addiction)

I think I’ve invented my own genre: Contemporary Dark Romance / Psychological Thriller.  Obviously, Consequences by its self isn’t a romance. However, since it is the relationship of Claire and Tony that propels the series, I’ve been told that makes the series a romance. Now, that said, I definitely believe it qualifies as DARK and PSYCHOLOGICAL THRILLER.

Did you have any specific people inspire your characters physical attributes?


My husband! (lol)  No, I honestly made my characters up, their physical characteristics and their personalities. Then, one night after I’d completed Consequences, I was watching True Blood with a friend. Alcide, Joe Magellano, came on.  Another character asked him how tall he was, Alcide replied, “Six four – six six.” I was like , OMG, he’s Tony!

Also check out our video chat with Aleatha. http://www.naughtyandnicebookblog.blogspot.com/2013/05/getting-to-know-aleatha-romig.html


ONE CLICK AND GET YOUR COPY OF "CONSEQUCNES" AND "TRUTH"

GIVEWAY
**ebook copy of Consequences given away**

2ND GIVEAWAY
Posted by Naughty and Nice Book Blog at 6:52 AM