PLAYING THE PART by ROBIN COVINGTON 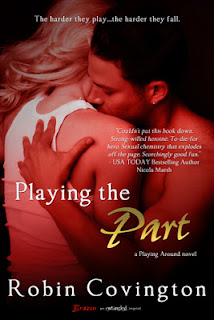 Summary:
After publicly self-destructing over a heartbreak a year ago, bestselling romance writer Piper James is now making nice with her publisher by agreeing to teach Hollywood's favorite action star how to act like he's in love. Only playboy Mick Blackwell has no clue what love looks like. When a seductive heat ignites between Piper and Mick, she jumps at the chance for a bit of fun between the sheets, but with two stipulations: she's kept out of the public eye and things end when she returns to New York. Only Mick keeps changing the rules on her. Tempted by America's favorite bad boy, Piper is wondering how far she's willing to bend...


Review:
Holy Sh**!! Robin Covington totally rocked this book! Like her other books, she does an amazing job, but this is by far her best one yet. She instantly captivates you from the very beginning of the book and will have you to want to put it down; I finished it in a few hours I was that hooked. Robin was able to describe the story in way that I became part of it, which made it realistic for me.

Piper is trying to pick up the pieces in her life after her ex-fiancé broke her heart and nearly destroyed her career. Antonio is an actor  and their relationship has always been in the public’s eyes, so when the break-up happened, when her world crumbled, when she had writer’s block and couldn't write, everyone found out about it. Since this incident, she has vowed to do everything to get her life back on track; keeping private and doing what her publisher tells her.

Her book is being made into a movie, yet the lead male character is having trouble getting into character. It is her job to coach him; the success of this film makes or breaks his and her career. However, the challenge is that she knows nothing about acting, she’s a writer and she must teach a top actor how to play a character she wrote. Being on the set is so surreal to her; it’s exactly how she imagined it when writing her book.

Mick is one of Hollywood’s top actors. He is extremely talented, very wealthy and smoking HOTT, sex on a stick; all the ladies want to be with him. Unfortunately, he has never been a relationship kind of person. All the women he has been with we all just for fun and not once has he ever been in love. He was born to act since his father is a very well-known actor as well, and he has been very successful with his career. Mick wanted to show that he could be something more than just the action films he normally does, he wanted to be more versatile staring in a love story would prove that.

When Mick first saw Piper standing on the set of the kitchen he knew he wanted to take her to his bed that night. There was something about the way she looked and the way she was dressed that made her sexy as hell. He knew she was going to be fun; he wanted her bad so he was going to pour on his charm really thick. Piper knew Mick was hot on the big screens, but nothing prepared her for meeting him up close. He was gorgeous in person and when they touched and that electric current zapped through both their bodies, she knew she royally screwed. Mick was everything she wanted and needed to avoid.

Piper knew how to play and keep up with Mick’s flirting, making Mick want her even more. Yet she tried so hard to keep it strictly business between them because she could not allow herself to go down that road again. While watching Mick do a scene, she suggested he read her book and to channel his feelings from a time when he was in love to help bring out more of the character. Since he had never been in love, he had no idea on how it feels to love someone, which made it much harder; so the next step was to read her book. Mick read the book and realized what a talented person she was. He loved the book and he was going to do his best to nail the part. There was something about her and it was going to be his mission to get to know her better.

Mick surprised Piper at the restaurant while she was having dinner with her agent. That dinner changed their relationship. They both got carried away and ended up kissing at the restaurant. The flashes brought them back to reality and the past came flooding back to Piper. She couldn't do this again, she tried so hard to recover from this, and she couldn't be sucked in so easily this time. She didn't like being in the eyes of the public; she liked her privacy and hated the cameras. She could not and would not make this same mistake again. It would destroy her and her career. Mick dropped her back to her place and all hell broke loose.

Who knew car sex could be so hot and steamy!? Piper has been with several men, but they were all boring, none of them compared to Mick. They both knew there was something between the two of them when they first met, but sex sealed the deal. The passion, the fire, the desire pours right out of the book and melts your panties! Piper knew this was a bad idea, but what’s a little fun while being in Hollywood, as long as it didn't get too intimate and sleepovers didn't happen, as long as it just remained just sex. She would be back in New York before she knew it. The sex got better every time and they started to crave each other more and more; it’s like they couldn't get enough of each other. But they got to know each other more on a personal level. There was more to Mick than what everyone saw. There was a sweet, sensitive, caring person buried deep inside and she was slowly falling for him. Being with Mick has allowed her creative juices to start flowing again. She’s finishing the story she started before the break up. Is it a coincidence that he is helping her find the passion she has once lost? Mick brought out a side of her she hasn't felt in a very long time. It already seems as if they have a routine down, but all she could stand was a fling, even if he kept pushing for a try at something different. When does something fun start turning real?

Will Piper let go of her past insecurities and let Mick in? Will Mick get tired and give up on Piper? Will Piper be able to get past the fling and try a relationship with Mick? Will she see that he is different? Will Mick be able to fully commit himself to one person?

My heart broke from both Piper and Mick several times throughout this book. Piper because of what she had to endure to pick up the pieces after what happened with Antonio, but it shows what a strong person she truly is. There are several situations that trigger her past and you will completely feel for her. Mick because he put himself out there for Piper (keep in mind everything has been strictly sex for him before) and it was constant push and pull. He wanted to try and work at something, but she just wanted it to be a fling. Antonio had put a sour taste in her mouth, but he was very persistent and didn't push. There were times were I wanted scream at Piper and tell her that Mick was not Antonio, for her to get it together and give it a try. That would've saved a lot of time. This was a fantastic read hands down. Definitely will grasp you from the beginning and you will have no idea where it will take you and will probably leave you all hot and bothered when you are through; a cold shower can't help you! Great job Robin! Go get your copy today!

This was reviewed by Jennelyn.
ONE CLICK TODAY !!!!!
"PLAYING THE PART"

Posted by Naughty and Nice Book Blog at 10:58 PM