BLOG TOUR - IN A HEARTBEAT by HILARY STORM 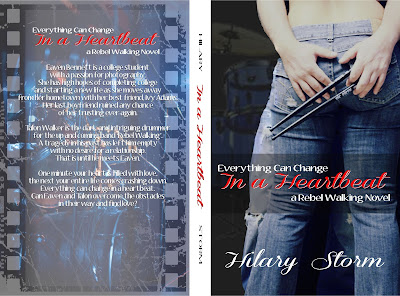 In a Heartbeat (Rebel Walking #1)


Eaven Bennett is a college student with a passion for photography. She has high hopes of completing college and starting a new life as she moves away from her hometown with her best friend, Ivy Adams. Her last boyfriend ruined any chance of her trusting ever again.
Talon is the dark and intriguing drummer for the up and coming band ‘Rebel Walking’. A tragedy in his past has left him empty with no desire for a relationship. That is until he meets Eaven.

One minute your heart is filled with love, the next your entire life comes crashing down. Everything can change in a heartbeat. Can Eaven and Talon overcome the obstacles in their way and find love?

This was a very quick and cute read for me. Some parts were predictable, but some parts just had me sitting at the edge of my seat wondering “where the hell did that come from?” The story ended too quickly for me, but it left me wanting more at the end.

Eaven is very closed, quiet, self-conscious and keeps herself protected. Her ex-boyfriend Brandon was very controlling and degrading towards her. She caught him cheating on her, causing her to put her walls up.  Since that incident, she’s closed herself off and constantly doubts herself and how she looks. Her parents took in her BFF, Ivy, who is she complete opposite from her. Ivy is loud, outspoken and will tell you how it is. She is the kind of best friend I would want to have. When Eavan is with Ivy, she steps out of her comfort zone more, experiencing more of what life has to offer. Ivy is always encouraging Eavan not to allow the past influence any of the decisions she makes and to just live life a little.

Talon is a hot drummer in a band, who seems very confident in playing and loves what he does. But he just seems so depressed, like the life is just sucked out of him. He experienced a heartbreaking moment in his past that he can’t seem to get past. It haunts him every day, wishing he could change it, wishing it never happened. His twin brother Taron looks completely identical to him, but his personality is the total opposite. Taron is actually the male version of Ivy. They’re always butting heads, but he has definitely met his match with Ivy. With their constant sexual comments to one another, it won’t be long till the two of them end up in the sack. Too bad, Taron is a complete man whore and Ivy wants nothing to do with him.

Talon is the same band Eavan’s cousin Luke plays in. Talon and Eavan first meet at Smitty’s, a bar that the guys play at. It was instant attraction from the first moment they laid eyes on each other. There was a strong pull that brought them together. Eavan tried to get to know Talon, but he wouldn’t talk, he would just look at her. Talon was fighting this feeling he has towards Eavan with his past. But he couldn’t stay away from her. They got to know each other and he started to like her more and more. He felt really comfortable with her; like he could tell her anything and she wouldn’t judge him. She also wouldn’t push him to talk when she would notice him clam up. Eavan knew he would open up whenever he would be ready.

Their relationship progressed rather quickly. I think too quickly that it all seemed rushed. You can see the sexual tension between them; they can’t keep their hands or their eyes off of each other. But they decided to not rush into anything, but get to know each other better first. Talon helped Eavan move out of her comfort zone and to try different things. She used to feel self-conscious about herself, but being with Talon, he made her feel sexy and confident. He made her feel special and confident about herself.

Eavan has a passion for photography and it shows through the pictures she takes. When’s she has a camera in her hand, it takes her into a whole new element. Eavan behind a camera gives her the same feeling Talon has behind the drums. Eavan is highly intrigued by Talon’s drum skills that he ends up teaching her how to play. No one has ever taken this much interest in him, especially to ask to learn how to play the drums. The more time they spend together, the more they are slowly falling in love with one another. Eavan’s insecurities are slowly coming back around, but Talon constantly shows her that there is nothing to worry about. That is until his psycho ex-girlfriend, Nicole, comes back into the picture. When Talon finally puts his foot down and makes the Nicole go away, she does something extremely drastic to try and get him back and away from Eavan. She tries to get rid of Eavan once and for all, just barely accomplishing it. Eavan shows her strength as she pulls through, while Talon never leaves her side.

My heart can’t help but feel sorry for Talon, with the situations that he is put through. I admire Eavan for her strength and the ability to trust Talon and patiently wait for him to talk about his past instead of forcing it out of him. You can absolutely see the love that they have for each other. If you are looking for a quick, cute, romance book, this definitely is the book for you. Good job Hilary! I am definitely looking forward to Taron and Ivy’s story.

Hilary Storm lives with her high school sweetheart and three children in . She drives her husband crazy talking about book characters everyday like they are real people. She graduated from with an MBA in Accounting and has a full time job as an accountant. Her passions include being a mom, writing, reading, photography, music, mocha coffee, and spending time with friends and family. She is the author of the 'Rebel Walking' Series. Book One: 'In a Heartbeat' is due to release in June. 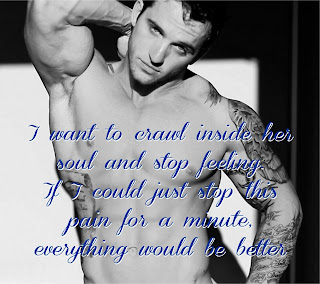 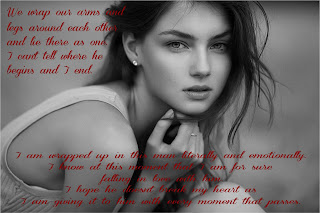 BE SURE TO ENTER THE GIVEWAYS

a Rafflecopter giveaway
Posted by Naughty and Nice Book Blog at 9:28 AM