MADE FOR YOU LAUNCH AND REVIEW by VI KEELAND 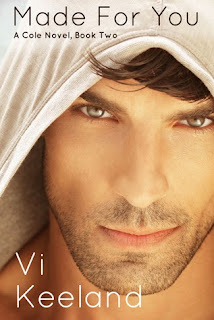 Jack and Syd spent a week in paradise. It was only supposed to be a fling. But life can be funny sometimes, and circumstances brought them back together again. Together they seemed to have found their happy ever after. But when Sydney is offered a chance at the career she has always wanted, she must leave Jack behind to follow her dreams. Can their love survive long distance? Sydney’s touring with a man every woman wants, but he only has eyes for Syd. And an unexpected tragedy leaves Jack feeling remorseful. Can the two find a way through to forever?

This is a continuation of Vi’s first book Belong to Me. I fell in love with Jack and Syd, I was counting down the days for this book to release. Vi captivated me once again from the very beginning of the book that this book became a quick read for me. Some parts of the book did feel rushed and I wish the book was longer then it was, but still a very good ending to the series. It brought me the closure that I needed from the first book.

Syd and Sienna start their dream and go on their international tour, leaving Jack behind. When arriving at their hotel in London, they are greeted with great hospitality. It warms Syd’s heart to know that even thousands of miles away Jack is still taking care of her and making sure she has the best there is to offer. As hard as it is to be away from Jack, Syd tries to enjoy herself and the sights around her.

“I don’t want to lose you Syd. I know I have to give you this space to live your dream, but I’m afraid your dream will take you away from me.” ~ Jack

Being in the spotlight is a natural thing for Syd and Sienna. You can see the chemistry between the two of them and their passion for singing. They meet Kyle and Justin who are on the tour with them and are also old friends from the past. Justin had a thing for Syd a very long time ago when she was with Michael. Syd decides to not tell Jack about Justin, knowing exactly how he will react. There is no need to worry Jack when he is thousands of miles away.

Even so far away, Jack’s possessiveness and the need to be in control affects Syd. To others, it may seem as if Jack is being a jerk but Syd loves it. She finds him sexy as hell knowing he is always looking out for her best interests and controlling in the bedroom is even hotter. Syd and Jack have always had great sexual chemistry between them. Some parts will actually leave you wanting to take a cold shower. Jack is still your sexy, intense, panty melter!

“What’s not to be happy about? My life is pretty perfect. I get to do what I love, and I have an amazingly sexy man that I can’t get enough of.” ~Syd

Being so far away from Jack and seeing an old clip of him with his assistant, Jenna, on tv causes Syd’s insecurities to come creeping back. She is wondering if she was sent on tour so he has his space away from her. Was he done with her? Did he want her to go on tour so he can move on? After ignoring Jack for a while, he finally explains and that there is no one else for him but her. With his business, she will also have just a touch of uncertainty. Syd also needs to deal with Justin hitting on her. There is no doubt that he is not over her and he will not stop trying till she is his. Justin plays the, I want to be friends card, but anyone can see what a sleaze he really is. Syd is not the only one with insecurity issues. As dominating and in control Jack is, he feels that he will lose Syd to music. Not only will he have to share her with the world, he will have to put up with all types of men ogling at her. He thinks that her music career will tear them apart and he is afraid to lose her.

“You’re mine Syd. And I don’t want to share. Not a picture, not a smile, not a touch. All of it is mine. Only mine. You were made for me. That sexy mouth belongs to only me. I wake up every morning craving that body that wiggles beneath me. That body that surrenders as soon as it’s filled with me. It’s mine and I need it so bad it physically hurts when I reach over on the bed and find your warm body isn’t there. So yea, I’m not happy about the picture. But it’s the rest of it that’s killing me.” ~ Jack

Jack didn’t have a close relationship with his father. He could never forgive him for what he did to his mom while she was dying. But when his father suddenly passes away, he shuts down. Syd takes a few days off and goes home to be with him, but he has closed himself off and he won’t talk to her. Very unlike Jack. Things are very different. There isn’t anything Syd can do to make him open up to her; except to just be there for him. When she goes back on tour, Jenna does some evil stunt and answers Jack’s phone and giving Syd the idea that she is comforting Jack because she is not capable of doing so and he is opening up to her. This illusion throws Syd off. Jack is someone she can’t have and she doesn’t like that idea. Jenna had a thing with Jack a long time ago and she wants him to be with her. She will try anything to split them apart. I knew I always hated Jenna. She’s conniving and evil and will stop at nothing to get what she wants.

While back on tour,  Justin gets all werid. He wants Syd back in his life and believes that she has been giving him mixed signals this whole time. He thinks that her being nice and friendly to him means that she wants to be with him. Justin gets out of hand one night, forcing Syd to go back home to Jack. Jack is furious and his controlling self tries to take over the situation. Justin will pay for what he did, Jack makes sure of that.

This was a great ending to this series. The love and desire that Jack and Syd have for each other are clear as day. They have such strength to have to endure all that is thrown at them. Jack will do anything to keep Syd happy. I felt bad for Syd at some parts, especially when she doubted Jack’s feelings for her. It was easy for misunderstandings to occur when they are so far apart from each other. I fell in love with Jack more in this book. He was good to Syd, did everything he could for her, gave her the best, and the little things he did tugged at my heart. I want a Jack! He had a very hard time dealing with their distance. Seeing such a strong and controlled man break down and slowly lose himself when his dad died broke my heart. Sienna is still that best friend that brings humor and excitement into everything. Damn that girl and her non filtered mouth made me laugh. Great job with this series Vi!! Can’t wait for more of your books to come! 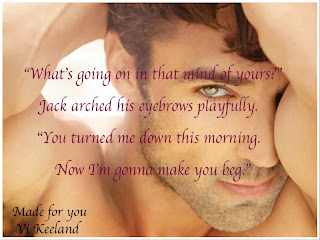 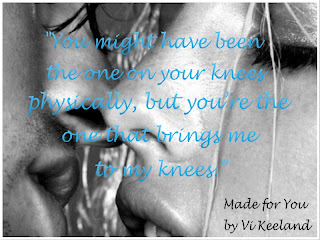 http://www.rafflecopter.com/rafl/sharecode/NDA3NzhkZTJhNmQ0OGQ2YTczMzc0ZDc2NzQzM2VjOjM=/
Posted by Naughty and Nice Book Blog at 9:58 PM