Officer off Limits (Line of Duty #3) by Tessa Bailey 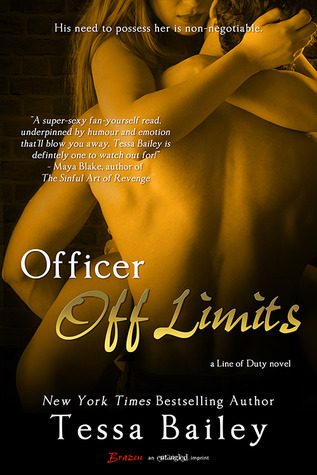 Story has just been dumped by her fiancé when she gets a call that her estranged hostage negotiator father has had a heart attack and she is listed as his emergency contact. On a whim she decides to travel from California to New York to help her father. Little does she know her life is about to change when she meets her father’s partner Daniel.

I honestly loved this book. There is nothing like a father telling a boy to stay away from his daughter to make you want to see the boy break the rules. Daniel Chase made me fall for him. Daniel is bad boy police officer who has a sense of humor and is a sports fan. Some baggage from his past makes you appreciate the man he has become and it is easy to fall for a guy who falls hard for the girl. Story was a feisty girl who lost her way and we see her find herself again. These two are perfect for each other and all we need is for Story to be able to trust herself enough to trust another man again.

This review was prepared by Michele Flaville. An ARC was received in exchange for an honest review.

Posted by Naughty and Nice Book Blog at 2:33 PM