BLOG TOUR~ WHEN YOU'RE BACK by Abbi Glines 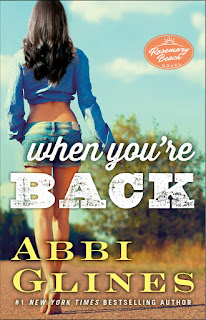 From #1 New York Times bestselling author Abbi Glines comes the next new adult novel in her beloved Rosemary Beach series, which continues the story of Mase and Reese from When I’m Gone.

“She was where my home would always be. It was time I took the next step and proved to her I was all in. Forever.”

A chance meeting in Rosemary Beach has turned into a fairy-tale romance as Reese prepares to move in with Mase on his family ranch in Texas. With the loving support of the Colts, and her recent discovery that she has family of her own, Reese can finally move on from the dark horrors of her past and into a bright future.

But Aida isn’t going to let that happen. The beautiful blonde has been raised to think of Mase as her cousin, but it’s clear to Reese that Aida doesn’t love Mase like a cousin should.

And then there’s Captain, the inescapable stranger who has connections in Dallas and Rosemary Beach—and who conveniently shows up wherever Reese happens to be. Hot, mysterious, and plain-speaking, Captain isn’t afraid to tell Reese what he thinks about Mase—and how he feels about her.

As the competition for Mase and Reese’s hearts heats up, Reese’s past begins to unravel, illuminating shocking truths that will forever change the lives of the happy couple—and set the final stories of Rosemary Beach in motion.

“She was where my home would always be.”

I’ve been patiently waiting for the release of this second part of Mase and Reese’s story. Abbi does a wonderful job completing their story. They’ve overcome a lot already in such a short time frame and they’re in for more of a wild ride. You feel the emotions that they go through; the love, the heartache, the doubt, the happiness. You feel it all. It’s like you’re right there with them. Not only that, you will fall in love with them even more while joining them on their journey. You won’t want to put the book down.

“You came upon me wave on wave.”

Reese Ellis finally has a reason to live and that reason is in Texas. So she is ready to pack up her life (which isn’t much since she doesn’t have any family and only a few friends) in Rosemary Beach and move to Texas to start a new life with Mase Manning. After a rough start she finally sees a future; one she never dreamed of having. But thanks to Mase, he saved her and has given her a glimpse of the future. The unexpected happens when Reese is surprised with her biological father at her doorstep. She gets a whole glimpse of the man that abandoned her all those years, but yet welcomes him with open arms. She gets to know him finds out she has more family out there. For that, she couldn't feel more grateful. It was just her and Mase, soon to be Mase’s family, now she has a family of her own to get to know more about as well.

“He made me feel as if I could ask him anything and he would do it. That was a powerful yet humbling emotion”

While getting settled in Texas, Mase falls back into his regular routine, while Reese tries to get acclimated with things. His family accepts her and welcomes her just like she belongs there but she feels a bit lonely while Mase is out working. Like she should be doing more with her time so she feels more useful. But with her dyslexia, she is afraid to put herself out there. Mase reassures her that she’s doing fine but is completely supportive and helps her when she wants to look for a job. She lands an office job, puts in her all and does a damn good job at it that she impresses her boss. Mase is very attentive to Reese and her needs. Always trying to put her first, before everything. Making sure she is comfortable, has everything she needs, and still keeping up her reading routine to keep her going.

“I can swear to you that you will always be it for me. No one fits me like you. No one makes me feel whole. No one else ever will.”

But can everything between them be all sunshine and flowers?  Or will what they have be too strong to break?  Mase’s “cousin” Aida has always followed him around the ranch every time she visited. Now with Reese there, she sees her as a threat to the relationship that they have. Aida realizes that they are not as close as they once were and that Mase spends all his free time with Reese now and not with her and she does not like that. She’s part evil and makes it her mission to get Mase all to herself and away from Reese. Everyone seems to see what Aida is doing except Mase, including Reese. Putting soo many doubts in her mind. Adding on to more doubts that were previously there. Since Mase doesn’t see it happening, she really can’t talk to him about since he won’t believe her.

“Don’t thank me for wanting to make you happy. I intend to keep you here. Whatever I need to do to make sure that happens, I’ll do.”

Reese meets Captain at a function with Mase and she ends up having to work with him. He’s one fine specimen I might add. Mase doesn’t like him one bit. He doesn’t give off a good vibe and his demeanor doesn’t settle well with Mase. Captain doesn’t hold his flirting back that’s for sure. Reese is oblivious to his flirting though, she takes it as him just being over friendly. She isn’t uncomfortable by him, she just doesn’t know if he is flirting with her or not because that would definitely make her uncomfortable. When he begins to break down what he sees that’s happening between Aida and Mase; things that she has been afraid to face herself, it sets the doubt bar pretty high up there. It makes her realize things about herself. It makes her doubt herself, her abilities and most of all her relationship with Mase. And instead of going straight to Mase she keeps it all in, making things worse. All while Captain is slowly making the move on her.

“I wasn’t sure which was worse, loving and losing or not ever knowing that kind of love at all. Life without Reese seemed empty, devoid, and pointless.”

Mase can’t seem to control things anymore. He knows something is wrong with Reese but can’t pinpoint what. It seems as if she is unhappy and can’t seem to lift her back up. It seriously bothers him that she feels some kind of way. Aida is being a pest and is constantly being needy. She doesn’t understand that he has a woman in his life now and that’s who his main focus is on. Between that and running the ranch, there is trouble back in Rosemary Beach. Needing to go back, he is stuck in a hard place; wanting to be there for the two women who need him the most. But Reese makes it easy for him by deciding to let him go. While Mase is away, the doubts come out full force. He is not there to stop Aida and Captain from their antics.

“Before Reese, I didn’t know that the world could be full of dreams. That you could wake up every day excited to breathe. That one smile from her could make me feel like a fucking king. Loving her is worth…. It’s worth it all. Living in fear of love isn’t living.”

When a blast from Reese’s past comes back to destroy her, the one person who we least expect is able to try and save her. It’s being at the right place at the right time. Or is it?
Will Mase be able to reassure all the doubts that Reese has floating in her head once and for all? Will he finally open his eyes and see what Aida is up to and put an end to that? Will Reese take Mase for what he is and believe that he truly loves her and only her? Will their love be able to withstand everything that has come their way? Will the troubles in Rosemary Beach be resolved? Will Mase and Reese be able to get past Reese’s past issues once and for all?

I liked seeing Mase in his element and how he would handle things in his home turf. Seeing him try so hard to balance things out between working and keeping Reese happy makes me love the guy even more. It shows how much he truly loves her. He will do anything to make her happy and give her anything she would want and need for. But when others try to interfere is when he can’t get a grasp on things and they start to startle. Sometimes though i just want to smack some sense into him and see things for what they really are. I love that he has a great family behind him to help reel him in when he needs it. I love seeing Reese grow more and more and seeing her put herself out there, trying to get a job herself without Mase’s help is proving that she’s trying to come out of her shell. She’s not letting her dyslexia get in the way of her life. And I love that about her. Aida on the other hand was another Nan-like to me who I wanted to strangle every now and then. Of course I love having the gang back in the book. My heart went to Harlow in part of her situation. But I’m glad she had Mase to help her through it. Captain, I don’t know how I felt about him. I disliked him at first, but the more I got to know him, I’m questioning that. This book, unlike all the other books were a bit different. Normally with the other books, I felt resolved when I reach the end, this one left it open for more. I was left with so many more questions at the end of it. She leaves it open for so much more in the next book, that’s what I think anyway.  I'm hoping my questions get covered in the next one. I'll be on pins and needles waiting for it.

ABOUT ABBI GLINES:
Abbi Glines is the New York Times, USA TODAY, and Wall Street Journal bestselling author of the Rosemary Beach, Sea Breeze, Vincent Boys, and Existence series. A devoted book lover, Abbi lives with her family in Alabama. She maintains a Twitter addiction at @AbbiGlines and can also be found at Facebook.com/AbbiGlinesAuthor and AbbiGlines.com.

Visit the Rosemary Beach Club (http://rosemarybeachclub.weebly.com/) and enter to win one of ten signed copies of ONE MORE CHANCE, or enter via the rafflecopter below.