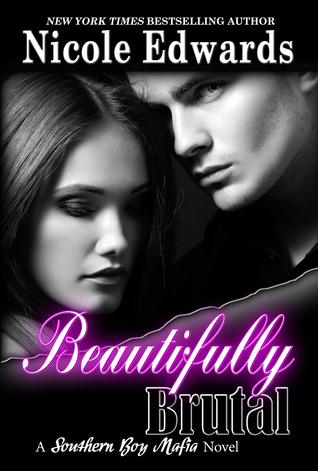 
Sometimes the only way to describe it is beautifully brutal.

If you think you know him… You’re wrong.

If you think you know his family… Wrong again.

If you think you know his story… You don’t.

If you did, you’d likely wonder how the hell a man like Maximillian Adorite managed to make it to this point in his life. At twenty-nine, he’s experienced more than most people could only ever imagine, all thanksto his family. Organized crime they call it. Mafia.

No matter how they spin it, it comes down to one thing. Max gets what he wants. Except for the one thing he wants most.

Her name is Courtney Kogan.

And now that he’s had a taste of her, Max knows he’ll never be able to let her go.
The Southern Boy Mafia series is a spinoff from the Sniper 1 Security series. It has been set up to be read without reading Sniper 1 Security, however, the characters will frequently cross over. 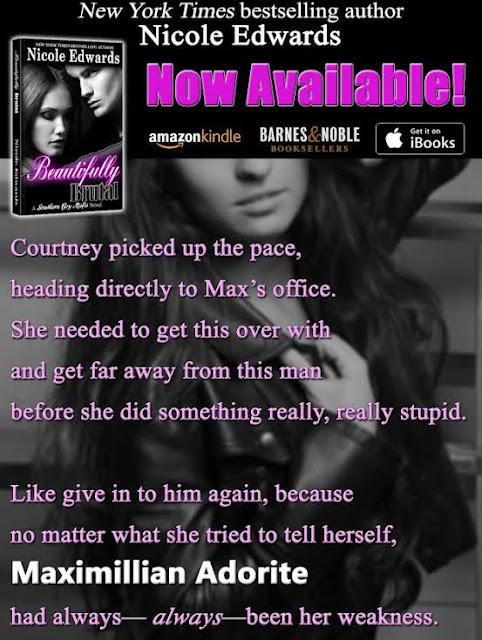 1) What’s your affiliation with Sniper 1 Security, for those that may not know yet?

Sniper 1 Security is my family’s business. My father, Casper Kogan, and his long time friend, Bryce Trexler started the company more than three decades ago. I guess it seemed logical that I did what my family did. I’m a personal security specialist – though there are plenty of names people use to refer to us.

2) Do you think of yourself as an adrenaline junky since you like this line of work?

Adrenaline junkie? Hmmm. Sure, I guess I can see that. I like to live on the edge. I think I’ve proven that.

3) What the craziest thing you have done on a dare?

The craziest thing I’ve done on a dare… **smiles** Not sure how crazy it is, but once, I stood up on the checkout counter at Wal-Mart. Started yelling that they needed a cleanup on aisle five-ninety-two. For the record, the Wal-Mart employees don’t necessarily like that.

It would always be this line of work. I can’t see myself doing anything else.

6) Boys with Tattoos or no?

Either or. And I guess it depends on the tattoo. I’ve seen some that I don’t particularly care for. I tried to talk Max into getting one that said “Property of Courtney”, but he said no. I’m still working on him though.

7) Do you have any tattoos?

Nope. But I’ve been tossing around the idea for a while. It’s hard to come up with an idea for something that’s so … permanent. I’m sure I’ll think of something one of these days.

8) What’s your go to drink when you’re out on the town?

Fireball and RumChata – I’ll let you look up what that’s known as. **smiles**

I’m a fan of going out to the clubs with my friends and I’ve got a favorite that I frequent – Devil’s Playground. 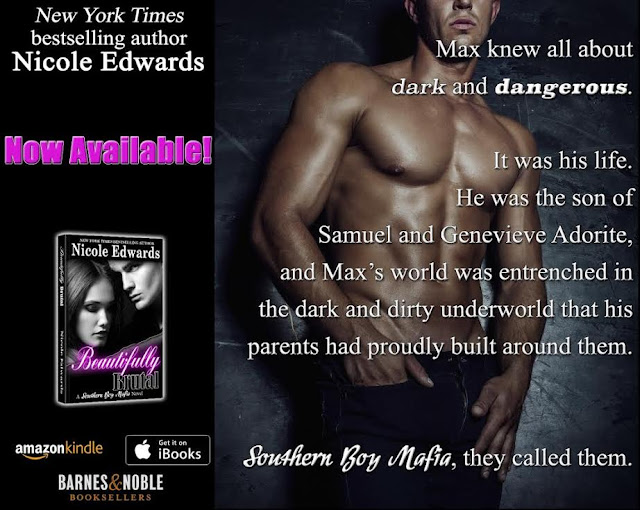 As always, I LOVE LOVE LOVE any book that Nicole Edwards publishes. I have to say, this book has been the only book that made me want to smack the shit out of the characters. Max and Courtney had me so frustrated, I wanted to strangle them with my bare hands. But I should have none from the way they interacted in Wait for Morning, Book #1 in the Sniper 1 Security Series.

Maximillian Adorite has complete control of his life and his business. The only chink in his armor is a beautiful woman named Courtney Kogan. She is his Achilles heal. From the moment he laid eyes on her, he knew he had to have her. Had to taste her, Had to be inside of her. He never thought that it would have been more than his usual one night stands. He was drawn to her. He wanted her. He needed her. He just couldn't trust her... or could he?

Courtney Kogan was at this party for one reason and one reason alone. To get intel on Maximillian Adorite. She was his assignment. An assignment that no one knew about, besides her father. Courtney begins to dig to get what information she is looking for. Little by little she gathers some intel, but what will she do with it. When lines blur and Max becomes more than just an assignment, what will she do? Will she relay that information?

The relationship between Max and Courtney is always, one step forward, three steps back. Max wants more. Max wants Courtney. Courtney struggles with her feelings for the mafia king. She is on one side of the law, whereas he is on the opposite. Can the two of them be together? Will she allow herself to be sucked into Max's world?

The connection between Max and Courtney is off the charts..... electrifying. Max is a true to form Nicole Edwards ALPHA. Courtney is hard as nails and a strong female lead, which is another thing that Nicole is known for.... which I absolutely LOVE. The push and pull between the two was frustrating at times. But I can't see any other way for how their relationship would play out. The good vs. the bad. They were both battling to stay true to themselves, but trying to accept each other in the process.

Things between the two of them change after one night. Will the two of them be able to meet on a common ground? Will they both express their feelings for each other? Will Courtney be able to love Max for who he is? Will Max be able to trust Courtney knowing that her sole intention to being with him was to gather intel on his family and his business affairs? Will her family accept her relationship with Max? What does the future hold for the two of them? Will either of them get their happily ever after?

Before RT could say anything else, Courtney’s cell phone chimed.

She was up and walking across the kitchen before she realized she’d moved. A wave of dizziness swept over her, letting her know she was a little on the tipsy side. How many shots had she had? Three? Four? Seven?

Squinting down at the screen, Courtney frowned when she saw who it was.

Punching the talk button, she put the phone to her ear. “What do you want?”

“Let me through the gate.”

Sighing, Courtney hung up the phone and then hit the icon for the program to allow her to see who was at the main gate of the family compound. Sure enough, it was Max. More accurately, it was Max’s phantom-black Dodge Charger SRT Hellcat idling at the gate, waiting for her to grant him entry. 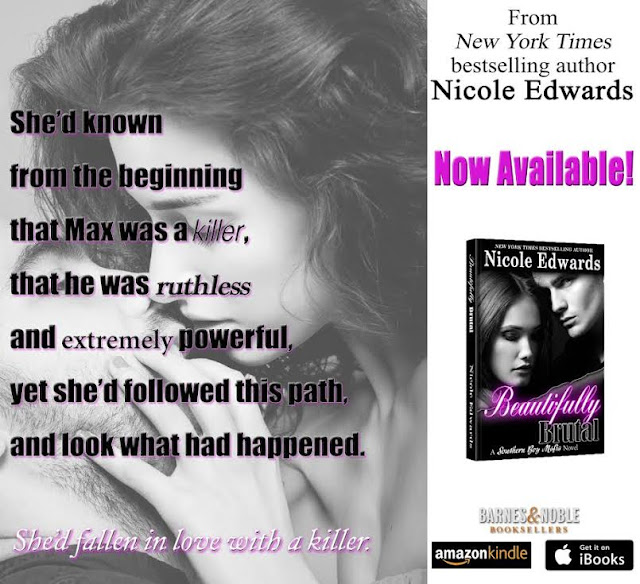 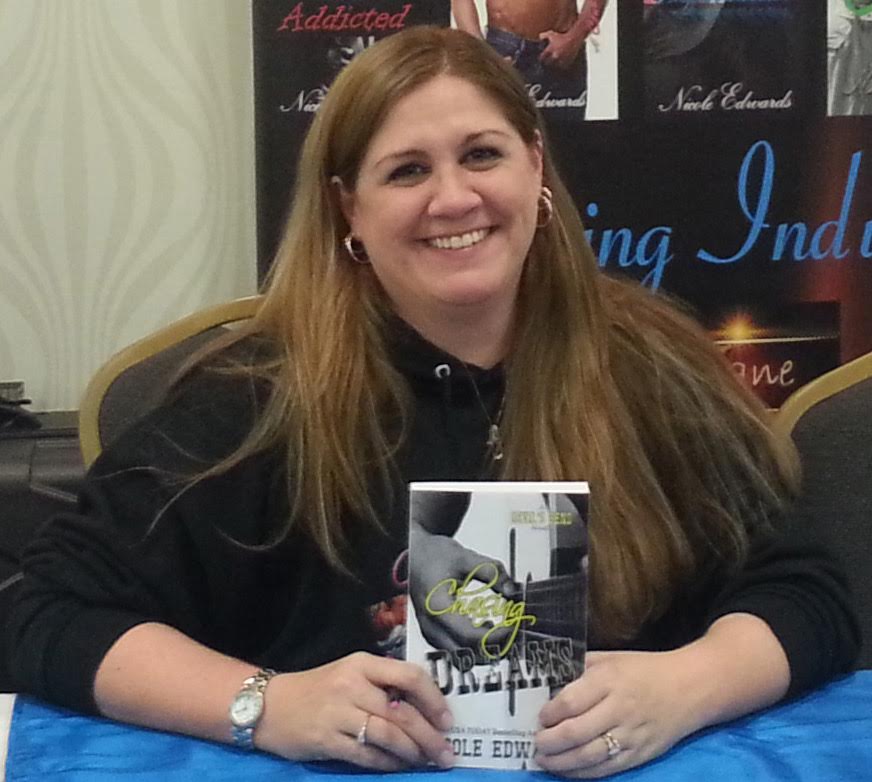 New York Times bestselling author Nicole Edwards launched her professional writing career in July of 2012. Having been an avid reader all of her life and a huge fan of creative writing, it seemed the likely path for her to take. Since then, she has released fifteen books and has no plans to stop. As her full-time career/hobby, Nicole writes steamy contemporary and erotic romances. Nicole is a New York Times and USA Today bestselling author who was born and raised in Texas. Married with three kids and four dogs, she has plenty of interaction to keep her imagination brewing. Her books have been featured in USA Today’s Happy Ever After segment as well as Indie Reader’s best seller list. She has forged her way as an independent author. Although she has a bachelor’s degree in Human Resources, she prefers to be hiding out in her writing cave, talking to the fictional characters that have built up in her head over the years. When she isn’t writing or plotting her next book (sometimes translated to “playing on Facebook”), Nicole loves to read and spend time with her family and her dogs.

ENTER THE GOODREADS PAPERBACK
GIVEAWAY HERE: http://bit.ly/1GwIpI1
Posted by Naughty and Nice Book Blog at 12:00 AM