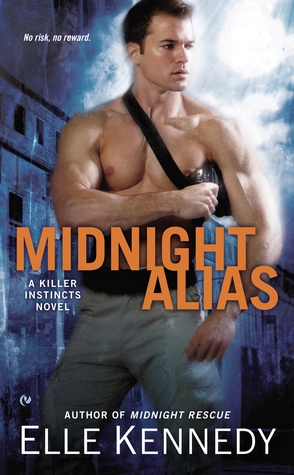 She’s smart, seductive, and in way over her head.
He’s her only way out.

An undercover DEA agent has gone off the radar. Suspecting an internal mole, the government needs Luke Dubois and his elite team of operatives to recover their man, and the New Orleans native thinks he’s found his way inside the dark underbelly of Manhattan: Olivia Taylor, the girlfriend of a mob boss and the sexiest woman he’s ever laid eyes on. His new mission objective? Get past Olivia’s defenses and convince her to take a chance—on him.

All Olivia wanted was to finish law school and live a normal life, but that dream was shattered when one dangerous night put her deeply in a mobster’s debt. Now Luke and his team will help her escape—in exchange for intel on the missing agent. But Olivia doesn’t anticipate her intense attraction to the reckless Louisiana charmer or that she’ll be forced to risk everything—including her heart.

In the second installment of Elle Kennedy's Killer Instinct Series we get to know more of another one of Morgan's men, Luke Dubois and we meet daughter, friend, stripper Olivia "Livy Lovelace" Taylor.

What would you do if your mother was so sick with cancer and you couldn't keep up with the bills?  What would you do to help her, would you give up your dreams and just hope everything you are about to do pays off and she will be with you for a lot longer than it looks.  What would you do when you became a stripper and made a lot of money but one night someone followed you to your car, he beat you within an inch of your life, you would fight back.  Olivia did fight back but she killed the man.  However, he had hurt her so back she was unconscious and when she woke up after being taken to the hospital and in surgery your boss is at your bedside telling you he loves you and he saved you.  He disposed of the body and now you can be together.  But you don't want to be with him, you know he is into bad things and he feels you owe him, he then provides you with gifts, jewelry, cars and takes care of your mom's medical bills.

Then she meets Luke and he is the sexiest man she has ever seen and he wants her.  They have a cat and mouse game but eventually Luke comes clean and tells her he wants to help her get out from under Vince's care.  He is investigating a missing DEA Agent and if she helps him find him he can get her and her mom new identities.  Olivia does not trust anyone, she relies only on herself but eventually she realizes she needs to get away.  She has kept her eyes closed as to what Vince is involved with because the goal has always been to get away.  Now she is seeing what has been happening and she needs to do anything, including believing the sexy mercenary will help her.

Luke is a happy go lucky lady's man can fall for someone.  Because we all know he says he doesn't do permanent.  But when he sets his eyes on Livy Lovelace he falls and falls hard, he just doesn't understand what is happening.  He even has to talk to Kane to see what he is feeling and even when Kane confirms he has to be in love he doesn't believe him.

He will do anything to save Olivia and her mother, get her away from Vince and complete his mission.  While Luke was sure he wasn't falling in love he never wavered his feelings for Olivia he just didn't understand them.

There is drug dealing, murder, assaults, kidnapping, investigations, stripping, undercover work, friends, family, illness, respect and love in this installment.  What more can you ask for.  I give this one a solid 4 star, happy reading….

This review was prepared by Heather McLaughlin.  An ARC was provided in exchange for an honest review.

Posted by Naughty and Nice Book Blog at 2:12 PM