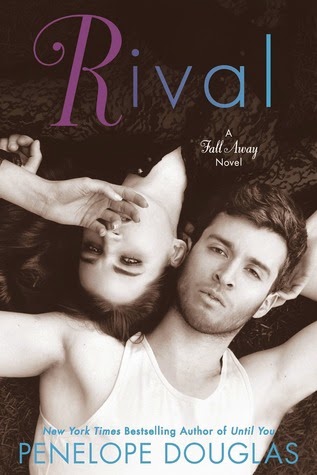 SYNOPSIS:
Madoc and Fallon. Two estranged teenagers playing games that push the boundaries between love and war…She’s back.For the two years she’s been away at boarding school, there was no word from her. Back when we lived in the same house, she used to cut me down during the day and then leave her door open for me at night.I was stupid then, but now I’m ready to beat her at her own game…I’m back.Two years and I can tell he still wants me, even if he acts like he’s better than me.But I won’t be scared away. Or pushed down. I’ll call his bluff and fight back. That’s what he wants, right? As long as I keep my guard up, he’ll never know how much he affects me….

OMG!!!!!!!  Madoc is SMOKING HOT !!!!  I have been waiting patiently for this book to release.  I figured if Jared is best friends with Madox, then I needed to buckle my seat belt, cause I was going to be in for a rough and emotional ride.

One girl has always held Madoc's heart, he just didn't realize it.  I have said it before, when boys are mean to girls, it usually means they have feelings for them.  That statement stands true to five year old little boys and it sure as hell stands true with this group.  Madoc and Fallon have always had a love - hate relationship.  But was that only a facade, what they showed the outside world, because it appeared that the two of them found comfort in each other when they were behind closed doors.

Madoc and Fallon's lives were torn upside down one night, and the two of them were NEVER the same.  It appears that they both blamed each other, they both had unsettled feelings toward each other, and yet they both fought like hell to stay clear of each other. When their pasts are thrown into their faces, they have to deal with it.  It appears that Fallon is holding all of the cards when she returns, the one thing she forgets is, Madoc holds her heart.

When push comes to shove, will Fallon continue to fight her feelings for Madoc?  Will Madoc admit his feelings for Fallon or will be continue to wear the mask that he does when she is around?  Fallon is the one person that knows exactly what buttons to push and how to get under Madoc's skin.  Madoc just doesn't know if he wants to continue to push her away, or welcome her into his open arms.

The chemistry between Madoc and Fallon is off the charts.  Their story is so heart warming that I felt the pain that they were experiencing.  I felt the ache in my stomach when Fallon finally opened to Madoc?  I felt the hurt that Madoc felt when he found out the truth behind Fallon leaving two years ago.  Can the two of them overcome their pasts and have a future together?  Will their pasts keep them apart?  Once the truth is revealed, how will this effect them? Will it destroy them, or bring them closer together?  Will they stay each others rivals, or will they become each others world.

I fell hard for Madoc, he fights hard, yet he loves hard!!!  Penelope delivered yet another AMAZING story in this series.  She will have you eagerly turning each page.  The jaw dropping ending was a HUGE surprise and I can honestly say that I NEVER seen that coming.  I hope she writes really quick because I am dying to get my hands on Falling Away, Jaxon's story.  I am not one that gives stars in my reviews, however, Rival definitely serves 5 stars !!!!!!