Journey Through RIGHT KIND OF WRONG with Chelsea Fine 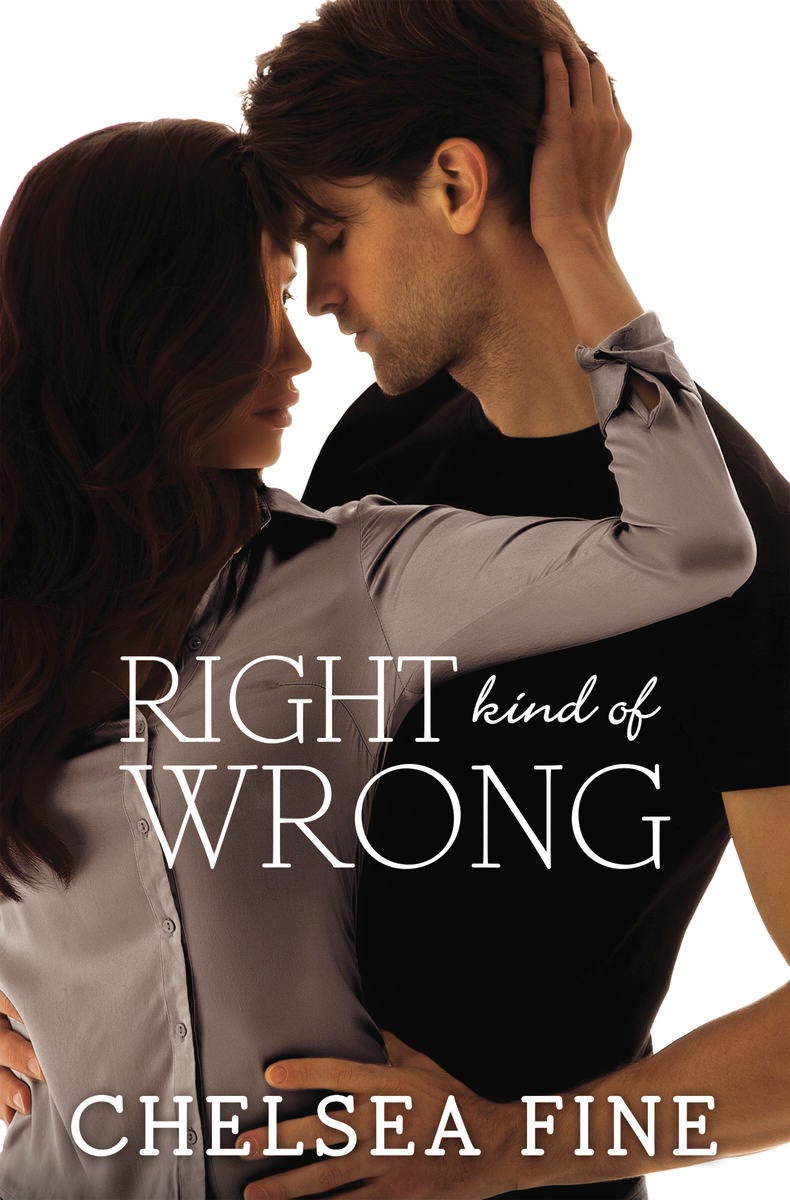 Jenna Lacombe needs complete control, whether it’s in the streets . . . or between the sheets. So when she sets out on a solo road trip to visit her family in New Orleans, she’s beyond annoyed that the infuriatingly sexy Jack Oliver wants to hitch a ride with her. Ever since they shared a wild night together last year, he’s been trying to strip away her defenses one by one. He claims he’s just coming along to keep her safe-but what’s not safe for her is prolonged exposure to the tattooed hottie.

Jack can’t get Jenna out from under his skin. She makes him feel alive again after his old life nearly destroyed him-and losing her is not an option. Now Jack’s troubles are catching up to him, and he’s forced to return to his hometown in Louisiana. But when his secrets put them both in harm’s way, Jenna will have to figure out how far she’s willing to let love in . . . and how much she already has. 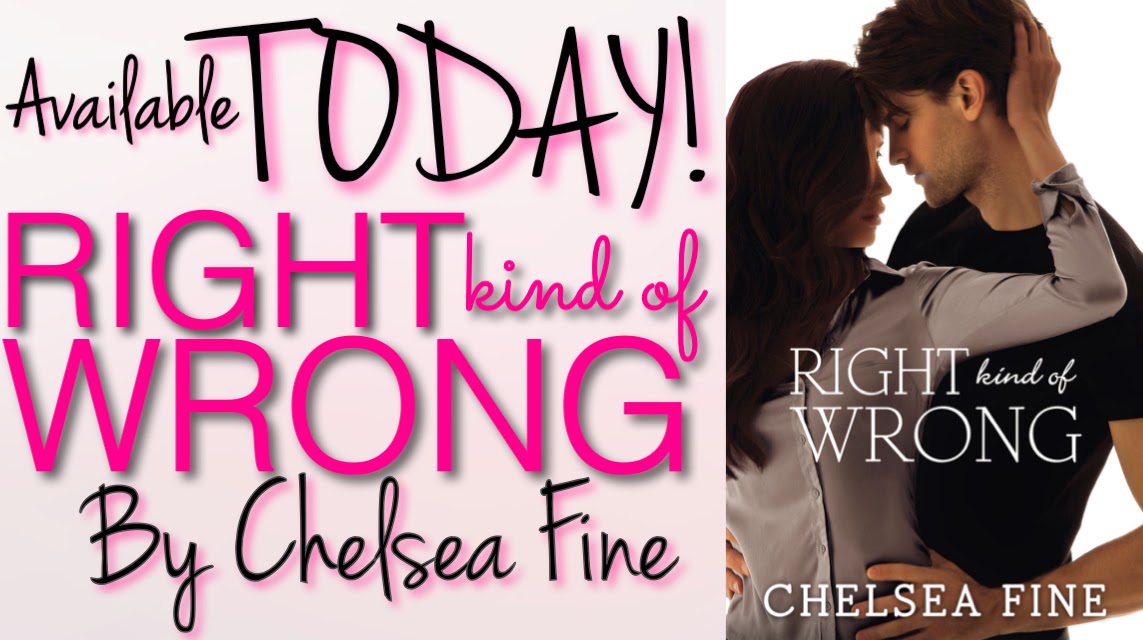 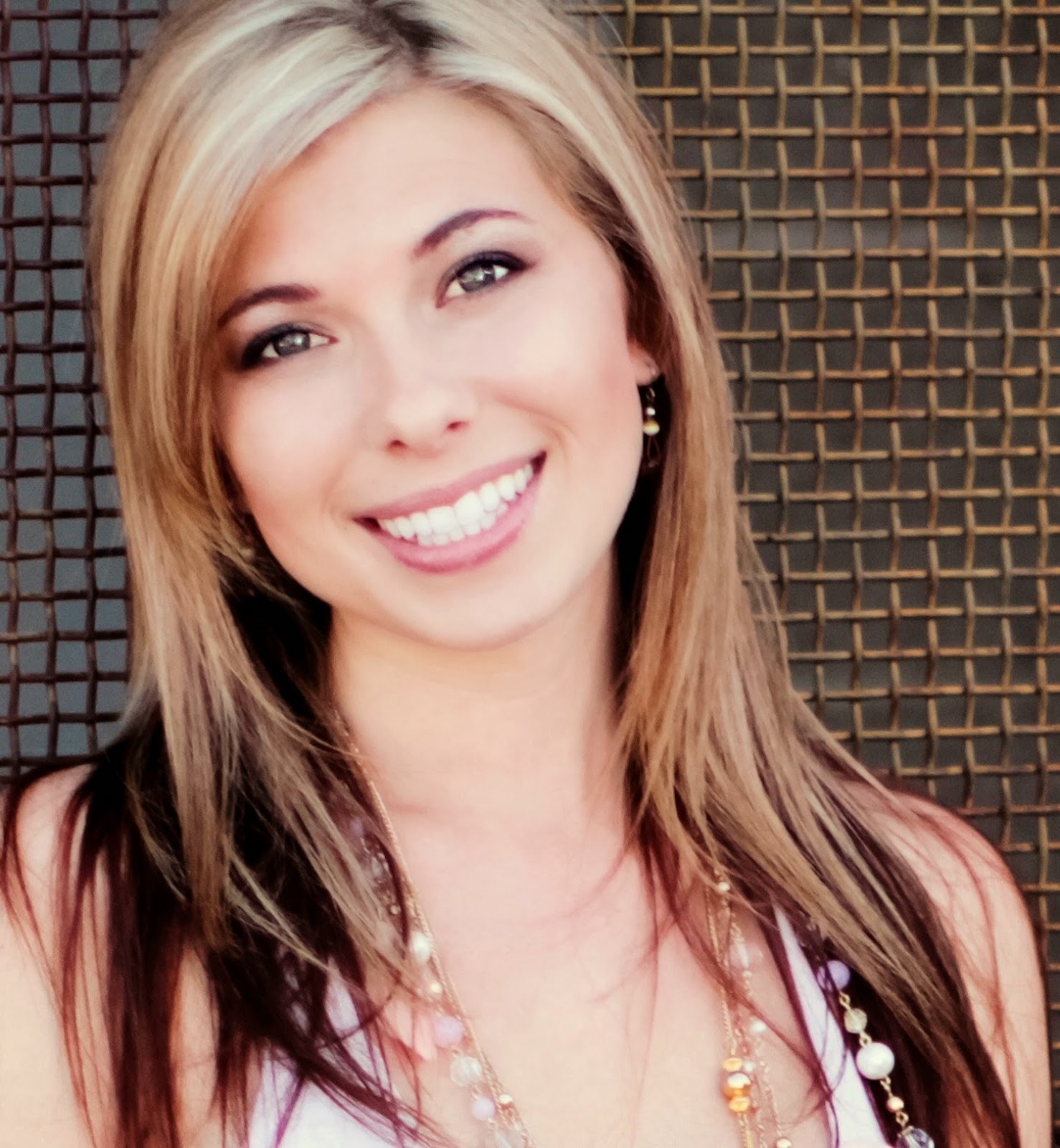 Chelsea lives in Phoenix, Arizona where she spends most of her time writing stories, painting murals, and avoiding housework at all costs. She’s ridiculously bad at doing dishes and claims to be allergic to laundry. Her obsessions include: superheroes, coffee, sleeping-in, and crazy socks. She lives with her husband and two children, who graciously tolerate her inability to resist teenage drama on TV and her complete lack of skill in the kitchen.

Journey Through RIGHT kind of WRONG
with Chelsea Fine  STOPS

These chapters are where the book really gets rolling. At this point in the story, the reader knows all about Jack and Jenna’s history and has a few clues into the shady dealings Jack used to be involved in. I call sections like this one the “Oreo cream” of a story, because it’s the good stuff. Haha.

Tattoos play a big role in this book, and a tattoo that Jenna is hiding from Jack is a central part of these chapters. I’m a big fan of tattoos (and body art in general) so I loved getting to incorporate ink into, not just my characters’ personalities, but the storyline as well. 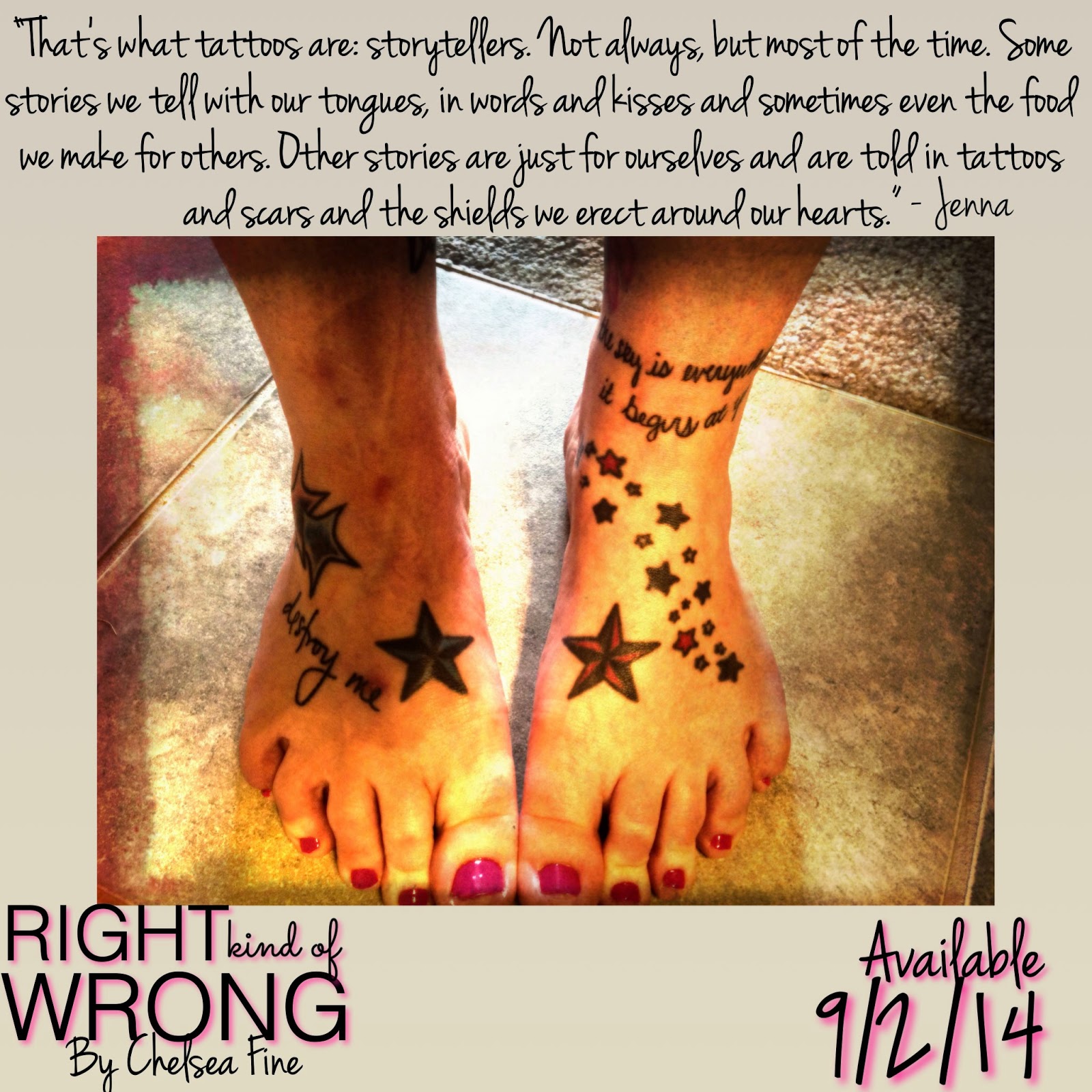 And oh! The bathroom scene. THE BATHROOM SCENE. If you haven’t read Right Kind Of Wrong then “the bathroom scene” probably sounds gross. Haha. But I swear it’s not! It’s hot. And emotional. And IT WAS SO MUCH FUN TO WRITE.

To give you an idea of the set up, here’s the passage right before the “bathroom” scene:

Padding my bare feet back into Jack’s bedroom, I start riffling through his drawers like a wet raccoon, searching for something that can pass as pajamas. I try on four pairs of basketball shorts and two shirts before finding items small enough to fit me without being obscene.
I’m not a small person—not at all. I’m average height, average weight. It’s just that Jack’s a giant who, apparently, wears size 100 in everything. Twisting the shirt around my middle so it hangs properly, I absently inhale and smile when I catch Jack’s scent.
What? No. Don’t smile about that, you idiot.
I unclench my fists from his shirt and smooth out the wrinkles I created clutching it to my nose. I’m not like a wet raccoon at all. I’m worse. Raccoons would be ashamed of me.
My inner dialogue—I’ve just accepted that I’m certifiable, at this point—comes to a halt when I hear an engine in the front yard.
Jack.
My first instinct is to run outside and smack him—you know, violent tendencies and all—but I regain my composure and choose a more mature tactic.
I stand perfectly still in the dark living room and wait for him with a scowl.
Through the window, I watch his dark figure stumble out of the car and slowly climb the front steps all hunched over. What did he do, go get drunk? Great.
I cross my arms, scowl still poised to kill, and wait as he opens the door and quietly steps inside. He flicks on the living room light and I ready myself for the shit storm I’m about to rain all over his ass. But my words, my anger, my bitter intentions fall away the instant I see his face.
“Jack.” It’s more of a gasp than a word as it leaves my mouth.
He pulls his eyes up from his bloody and torn hand, and sets them on me. “Jenna. What the hell?” Several emotions cross his eyes. Anger. Fear. Relief. Anger.
I pull a face. “Don’t ‘what the hell’ me. You’re the one who stole my car and drove off into the night.”
He screws his face up. “So you waited up to yell at me?”
“Well…” I pause.
Is that why I waited up? Well, crap.
“Yeah,” I finally say, not particularly proud of my answer.
“Typical,” he mutters. “Listen. I’m not in the mood to bicker with you right now so if you don’t mind rescheduling this bitch-out for tomorrow, that would be great.”
He brushes past me, his shoulder lightly sweeping mine, and halts at the touch. Facing me, he softens his husky voice. “I’m sorry.”
Long eyelashes lower over his storm-gray eyes as he searches my face, and the wicked wildfire inside me instantly reignites as his gaze drops to my mouth.
The thick frustration that filled the room just moments ago thins into a sweet trepidation, curling around us with a daring charge. So delicious. But so dangerous.
I carefully step back and clear my throat. Jack does the same. We’re masters of avoidance.
Without another word, he moves past me and marches down the hall. That’s when I spy the blood running down the back of his shirt from a large gash between his shoulder blades.
My heart stops.
“Jack?” I say, staring with wide eyes. “What happened to your back?”
He looks over his shoulder and frowns. “Oh. That.” Turning back around, he continues striding down the hallway. “Knife wound.”

To sum up, Jack got in a fight and has come home all bloody. So after the scene above, Jenna takes jack to the bathroom to bandage his back and bloody knuckles. One thing leads to another and…. well, there’s definitely some smooching involved. ;)

Since Right Kind Of Wrong in part of a series, it’s fun to incorporate characters from previous books now and then. In this chapter, Jenna has a conversation with her best friend, Pixie (who was the main character in book one, Best Kind Of Broken) concerning how panicked she is about almost falling for Jack.

“Did Jack totally freak out?” Pixie asks over the phone.
“No!” I say. “That’s the weirdest part. He just went with it. He pulled me down and kissed me and stroked my hair and whispered in my ear and shit, until I was all turned on again.”
“Damn,” she says with a heavy exhale. “Well this changes everything.”
“What? No! No. It shouldn’t change anything. Nothing is changed.”
“Okay, calm down. I wasn’t talking about your life. I was talking about your issues with Jack. I think he’s right about you trying to control things.”
I gasp. “Traitor.”
“Think about it. You are pretty weird about your future. I mean, you couldn’t even handle me saying ‘this changes everything’ a second ago. Change is not your friend, Jenna. And as far as Jack saying you’re afraid to have him, well…I think he’s right about that too.”
“Maybe you should be besties with Jack then.”
“Listen. You’re the one who told me not to be afraid to love when everything was happening with Levi. Remember that? You said love isn’t safe and life isn’t guaranteed, and that I needed to let Levi in?”
I wrinkle my nose. “Did I say all that? Crap.”
“I’m just saying that maybe you should give Jack a chance. See where it goes.”
“I know where it goes,” I snap. “It goes from love to marriage to babies to divorce to loneliness to poverty to death.”
“Wow,” she says blandly. “That might be the most depressing thing I’ve ever heard.”
“That’s the truth, Pix.” I pick at the bedspread again. “Happily ever after is for romantic comedies and fairy tale books.”
“Stop being a baby.”

I adore writing dialogue between BFF’s. Something about it is refreshingly honest. Friends can be blunt and rash and direct…and it’s awesome. Haha.

I based Jenna’s character on my BFF in real life, Kristen. Kristen is smart sexy, sassy, and covered in tattoos—and she’s the best friend a girl could hope for. Pretty much every conversation between Jenna and Pixie in my Finding Fate series is based on how Kristen and I would interact with one another.

Naming characters is a big part of writing a story. And for me, it’s sometimes a difficult part as well. I really struggle with deciding on character names so in Right Kind Of Wrong I decided to have Lilly make fun of some of the names I picked, just to poke fun at myself. Haha. I’m a nerd.

“Trixie called me this morning,” Samson says, taking a bit of bacon. “And said that Sasha called her last night after you dropped Hedrick off all black-and-blue at their house.”
“Ugh.” Lilly shakes her head. “Trixie. Sasha. Hedrick…It’s like you find all your friends at brothels.”
Samson glares at her then turns to Jack. “You wanna tell me what the hell happened to Hedrick? And maybe why the bathroom looks like a vampire’s pantry?”
Lilly nods at her omelet. “Hedrick would be a great vampire name.”
Samson flashes his mother a fake smile. “And Lilly sounds like it should belong to a four-year-old girl with blonde pigtails who lives under a rainbow.”
Lilly grins at him. “I know.”

** FUN FACT **
I got the name “Hedrick” from a tattoo artist in Las Vegas. Kristen and I were in his shop on the strip (Kristen was getting some piercings done—I told you she was just like Jenna) and the guy who performed the piercings wore a nametag that read, “HEDRICK” in large block letters. Oh yeah. Classy.

In this chapter, Jack finally tells Jenna the truth about his past, even though he’s afraid she’s going to freak out and never speak to him again. This is one of those “information” chapters that are necessary to move the story along, and while I don’t always enjoy writing these info-overload passages, I was excited for an outlet to write this passage about answers. 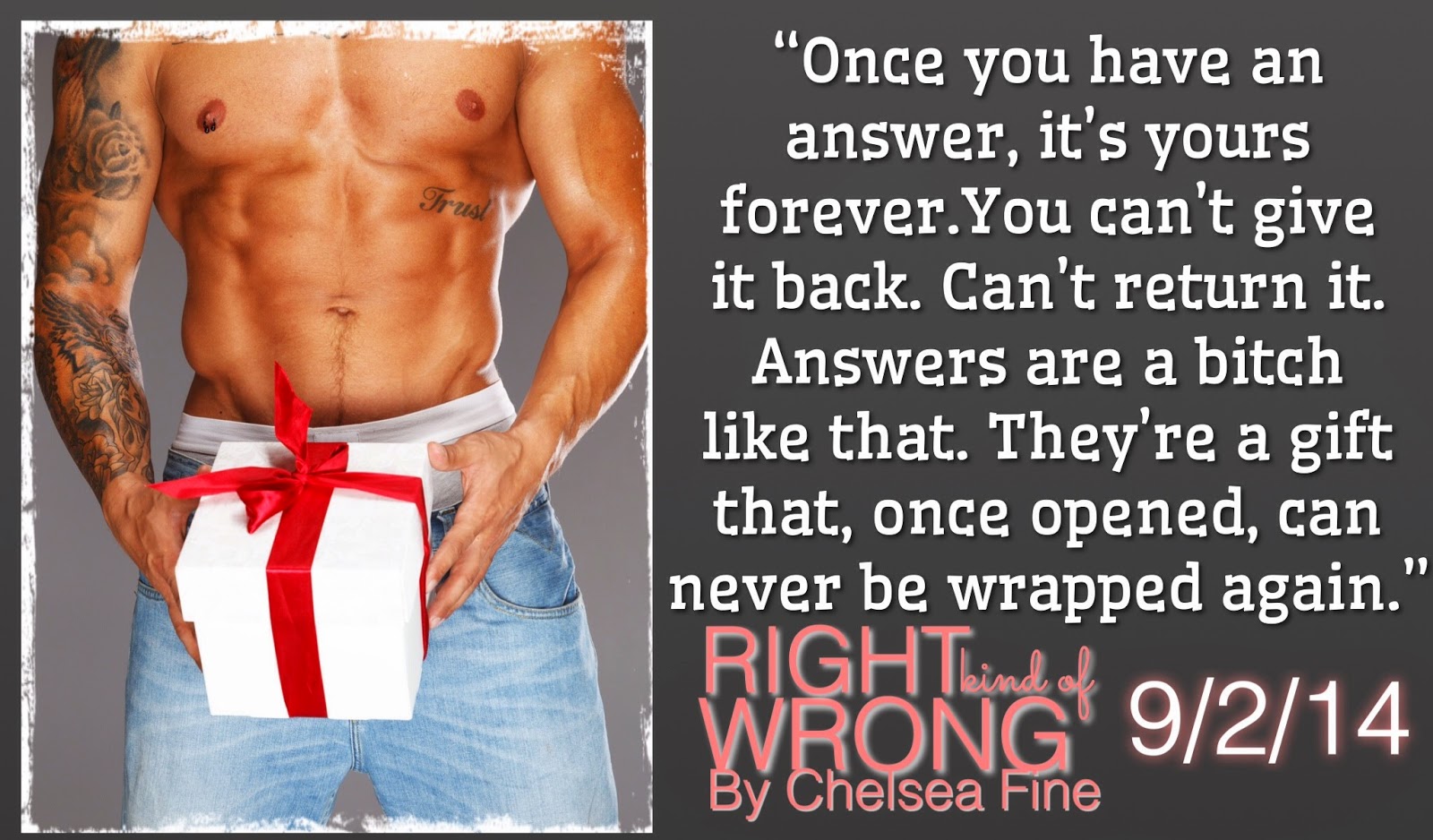 Isn’t that the truth? Le sigh. Anyway…
Thank you for taking this journey with me through these chapters of Right Kind Of Wrong! Until next time, I’ll leave you with the closing passage of chapter sixteen.

I did it. I’ve spilled my horrid history and now I’m standing, at Jenna’s mercy, waiting for judgment.
Her eyes rove over my face, my body, my face. Her lips part then press together. My pulse rises.
“Please say something,” I say, wondering if burning alive would be as frightening as this moment.
Blinking a few times, Jenna comes back to life and holds her mug out with an arched eyebrow. “I’m gonna need more coffee.”