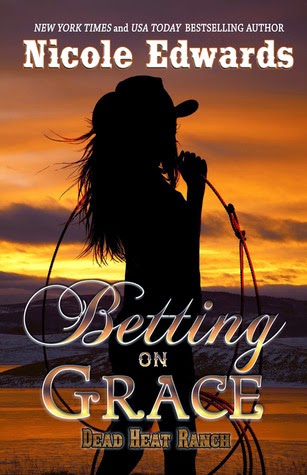 Dead Heat Ranch, #1 New York Times bestselling author Nicole Edwards is continuing to heat things up with Betting on Grace, a sexy new ménage novel which is the first book in a hot new series called Dead Heat Ranch. The tables have turned on Grace Lambert. For a woman familiar with long days and hard work, she just recently discovered just how hot the sultry Texas nights can get. Finding time to spend with her two smoking hot cowboys, Grant and Lane, isn’t exactly easy, but she’s forging ahead with what has turned out to be the hottest relationship she has ever been in. The true test comes in standing up for what she wants. Grant Kingsley has landed his feisty cowgirl, Gracie, and an equally sexy cowboy, Lane Miller, but everything outside of his romantic life has gone from routine to chaos in a matter of days. Unfortunately, he’s become rather acquainted with Murphy’s Law as he is inundated with a string of bad luck. His mother is missing, his father, a gambling addict, is worried about only one thing these days, and when Grant refuses to give in, all hell breaks loose on the ranch. Lane Miller will be the first to admit that he falls in love easily. And he’s done so again, with both Gracie and Grant. Only this time around, he’s not giving up or giving in. Cowboys don’t know what it means to back down and Lane will ensure that the two most important people in his life get all of him, no matter what it takes. Don't forget to read Boots Optional, the prequel to Betting on Grace, before you dive in!

I am a HUGE fan of Nicole Edwards and with each book she writes I become an even BIGGER fan.  I can not get enough of her her books.
Betting On Grace is a continuation of Boots Optional, which introduced us to the Lambert Sisters, and the mouthwatering cowboys, Grant and Lane.  While working on the ranch, Grant and Lane were told on a continuous basis, along with the other ranch workers, the Lambert Sisters were OFF LIMITS.  Mr.  Lambert made it clear that no one was attempt to have a relationship with any of his daughters.  However, Grant and Lane never took his words to heart.  They have had eyes for her for years, and it was just a matter of time before one of them were going to approach her.

Grant and Lane both have been in love with Gracie, and we find out that they are in love with each other.  When Gracie acts on her feelings for both men, things get a little explosive. Gracie knows what she wants, and she isn't afraid to fight for it.  There are only a few things that Gracie keeps private, until her sister, Mercy plans for Grant and Lane to be in the right place at the right time.

When things get tough for Grant with his family, Lane and Gracie vow to be there to support him.  The only thing is, Grant isn't quite sure how to handle their love and support.  Will Grant accept it?  Will he push them away?  Will Gracie and Lane push to have Grant see that he doesn't have to go through things alone?  Is Grant ready for the world to know that he is bi-sexual?  If their relationship is revealed, is Grant ready for the possibly back-lash that they may receive?

Lane is the alpha in the relationship.  Yes, Grant can hold his own, but Lane is the one that keeps this relationship together. Lane won't back down and he makes it clear how he feels about Gracie and Grant.  At times, my heart broke for Lane.  He wore his heart on his sleeve and he wasn't asking for much in return.  He just needed to "hear" how Gracie and Grant felt about him, rather than being shown.

Gracie's strength never ceased to amaze me.  She never bit her tongue and she said what was on her mind.  I love having a strong woman in novel.  My money was always on Gracie to hold things together.

If you have not read this series, you MUST one click.  I am excited that each Lambert sister will be getting their own book.  Nicole did an amazing job setting up their stories and she has me wanting to get to know them better.

Boots Optional and Betting on Grace are definitely HOT reads.  You will fall in love with Grant and Lane and want to have the cowboys for yourself.  Nicole makes seeing two hot men together every woman's fantasy !!!  Kudos to you Nicole, you make me wish I was Gracie Lambert!!! 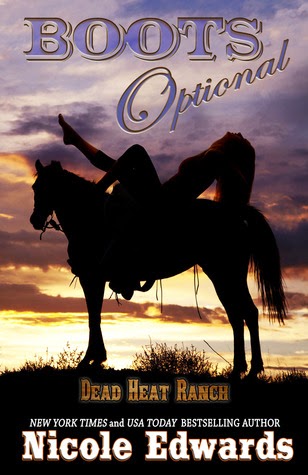 Dead Heat Ranch Novella, #0.5 Note: This novella was previously published in the Some Like It Hot Anthology. Although the story has not changed, this version contains a short bonus scene. New York Times bestselling author Nicole Edwards is heating things up with Boots Optional, a sexy new ménage novella which is the first book in a hot new series called Dead Heat Ranch. Grace Lambert is familiar with hard work, long days, and handsome cowboys. She’s been working for her family’s dude ranch since she was old enough to ride a horse and she’s not afraid to get her hands dirty. What she is afraid of is the heat that’s been generating between her and not one, but two sexy cowboys who’ve set their sights on her. And each other. Grant Kingsley and Lane Miller have both had their eyes on Gracie for years, but the feisty cowgirl has managed to keep them at bay. As far as they are concerned, cowboys don’t give up, and neither of them is ready to give up just yet. Not on her and not on the heat that transpires between the two of them. Find out what happens when the sultry Texas nights get as hot as the fierce Texas days.