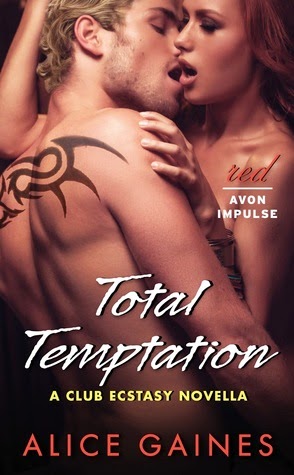 Looking for the ultimate fulfillment? The experts of Alice Gaines' sexy new Club Ecstasy series are here to take your pleasure to the next level …Cassandra Willis is ready to let loose, ready to finally explore the sort of wild, uninhibited pleasure she's always dreamed of—but only if promised complete discretion. Club Ecstasy offers luxury and secrecy … and the lover of her dreams.But as she explores her every desire and discovers a naughty side she never knew existed, Cassandra has to decide how complete her transformation will be. Will this sizzling encounter with the one man capable of meeting her every need be a mere diversion? Or will Cassandra's temptation lead to a new beginning … and a second chance at knowing herself?Ready to achieve complete satisfaction? Visit Alice Gaines' sexy new Club Ecstasy series and discover a true dedication to pleasure …

Alice has a PhD from the University of California at Berkeley. She shares a house in Oakland California with her pet corn snake and a stray cat that lives in her yard.

When Alice isn’t making up stories in her head, she spends her time cooking, gardening, and listening to her favorite band, Tower of Power.


“You take things too seriously.” He reached down and swatted her bottom. “Get in the hot tub. I’ll join you in a second.”
Posted by Book Plug Promotions at 12:00 AM