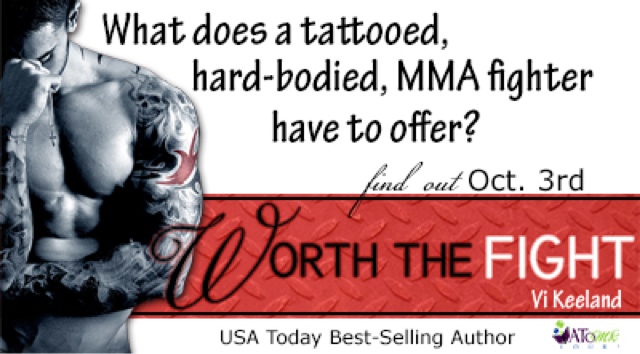 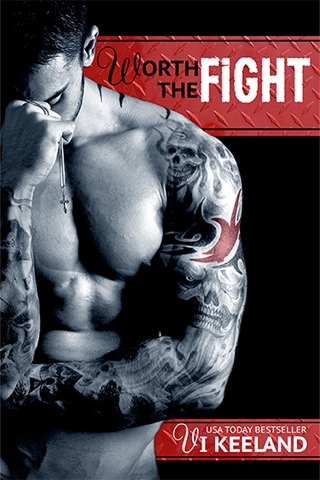 BLURB: It didn’t matter that the ref called it a clean hit. Nico Hunter would never be the same.

Elle has a good life. A job she loves, a great apartment, and the guy she’s been dating for more than two years is a catch and a half. But it’s boring…and she strives to keep it that way. Too many emotions are dangerous. Her own past is living proof of what can happen when you lose control.

Then Nico walks into Elle’s office and everything changes…for both of them. But what can the tattooed, hard-bodied MMA fighter and the beautiful and always steady attorney have in common? A lot more than they bargained for. *Standalone~ HEA*

Elle on Nico I’ve never seen a body like his so close before. It just doesn’t seem real. Both of his arms are covered in tattoos, it looks like he’s wearing colorful sleeves, only he has no shirt on. They intertwine and wrap around his bulging biceps and I get the urge to trace a path from the first splat of ink to the last with my tongue. My body’s reaction to him is unlike anything I’ve ever felt before. These aren’t feelings that I’m used to, they seem to come out of nowhere and are uncontrollable.

One side of his lip curls up slightly, as though he is amused at my staring. He hands me a glass of wine without asking if I want one and I take it because I need it to calm my nerves. I’m here staring at this bigger than life man, and suddenly I’m speechless. The wine can’t seep into my bloodstream quick enough. Half the glass is gone in one long, unladylike gulp.

“Thirsty?” I look up at him and find a glimmer of amusement in Nico’s eyes, mixed with something else. I think he knows I’m trying to calm myself and I fidget in my seat on the couch as he stands there looking so unaffected.

Nico on Elle I’m up at five a.m. every morning. Well, every morning except today. I slept like shit, my body a mass of pent-up frustration. I kept my word all night. Even though all I wanted to do was pick her up, carry her into my bedroom, and ram myself into her to claim her as mine. Then she kissed me. I know I could have taken it further after that kiss. But I don’t want one night with Elle. I want more. I have no idea why, but I do. A lot fucking more.

By the time I drove back home last night, I’d gotten myself under control. I’d reasoned with my hard-on until it finally saw my way. Who knew you could reason with a fucking hard-on. I guess I never tried. I just took care of it, did what it wanted me to. But then I walked into my loft and I smelled her. And all reasoning went out the window. I couldn’t sleep with a steel pipe in my pants, so I took a cold shower. It didn’t help. Then I was wide awake with a hard-on. I tossed and turned with a picture of Elle smiling at me in my head. Taunting me for being such a sap.

About the Author Vi Keeland is a native New Yorker with three children that occupy most of her free time, which she complains about often, but wouldn't change for the world. She is a bookworm and has been known to read her kindle at stop lights, while styling her hair, cleaning, walking, during sporting events, and frequently while pretending to work. She is a boring attorney by day, and an exciting smut author by night! Website | Facebook | Twitter | Goodreads

Posted by Naughty and Nice Book Blog at 6:01 PM