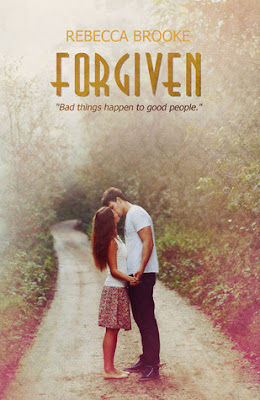 What happens when one moment changes the course of your entire life? Do you sit back and accept it, or fight to live the life you choose? Caleb Jacobs has a past that has haunted him for two years. Knowing he can never forgive himself for the events that led to his departure, Caleb chooses to live a quiet life—concentrating on school, sports, and shots. But when he is paired with Angie for a history project he realizes that no matter how much you try to hide from your past, one way or another it will find you.

Angelina Powers knows what she wants from life. Growing up with only an alcoholic father for company, Angie learned early on in life that you can only count on yourself. But that doesn’t stop her wishing for her white knight. She’s confident, happy and focused…until she meets Caleb. So how will she feel when her potential white knight turns out to be more of a black shadow?

Forgiven is a beautiful love story about two broken soles who are trying to deal with their pasts and learning how to forgive, not only others but themselves as well.

Caleb Jacobs' past has been haunting him for two years.  One tragic event changed
his life forever.  Caleb has been struggling with the guilt from that night.  He can't forgive himself for what happened and won't allow himself to move on.  He finds comfort with alcohol because it numbs the pain that he feels everyday.  He drinks every night just to help him sleep and avoid the nightmares that he has.  He chooses to leave his small town and get a fresh start at a university where no one will knows him.  Caleb focuses on school, football, and partying all while keeping people at arms length.  His world changed in a blink of an eye, when his history teacher announced, "Caleb Jacobs will be working with Angelina Powers."

When Caleb laid eyes on Angelina Powers, his attention was immediately drawn to her eyes.  Caleb knew at that moment, his world was turned upside down.  Caleb has seen eyes like that before, only now he sees them in his nightmares.  Caleb decides to do what Caleb does best, he acts like a complete asshole and is totally rude to Angelina and refuses to be her partner for their history project.

Angelina (Angie) Powers has a past of her own.  A past that only her best friend, Emily knows about.  Angie's mother left when she was young, and her father was an alcoholic who verbally abused Angie for years, until she left home to attend college.  From years of verbal abuse, Angie has built a wall around her heart, never allowing anyone to get too close.  Angie is furious at how rude Caleb was to her and she refused to receive a failing grade on this project.  She demands that Caleb and her find a common ground in order to complete the project at hand, and then they will go their separate ways.  It was evident that they both found each other attractive.   Sparks were flying between them, the only question was, would either of them act on their feelings.

Caleb agrees to work with Angie on the project; they would get it down as quickly as possible and they would never speak again..  However, Caleb's plan didn't go as he had planned. He was drawn to Angie, he knew he was falling and falling fast.  Caleb feels he is not worthy someone's love, that he didn't deserve it.  Angie has turned his world upside down.  Caleb struggles with trying to keep Angie at arms length, however always within his reach.  He convinces himself that he doesn't deserve her, but no one else does either.

My heart broke for Caleb because he didn't think he deserved to be with Angie.

"She deserved to be protected and loved - things I would've loved to do for her.  I wanted to be her knight in shining armor.  The only problem was I wasn't a knight - I was more like a demon trying to steal her soul." ~ Caleb

Caleb's best friend/roommate, Josh sees the change in Caleb and knows it is because of Angie.  Josh knows that Caleb has fallen for Angie, it appears that Caleb needed a little push to admit it to himself.  Caleb and Josh have been living with each other for two years and Josh never pushes Caleb to talk about his past.  He only pushed him to admit his feelings for Angie.

"Fine, I think she is sexy as hell and I would love to do more than work on a stupid fucking project with her!  I want to take her to dinner and spoil her the way she deserves to be.  I want her more than I have ever wanted a woman.  But it doesn't change anything so why should I dwell on something I can't have." ~ Caleb

Both Angie and Caleb were struggling with the ghosts of their pasts.  Angie learned a long time ago to forgive those who hurt her.  Angie knows that Caleb has a past, but she never pushes him to tell her.  Caleb found out about Angie's past when he showed up unexpectedly at her apartment.  Angie tells herself that she will wait for him to tell her when and if he is ever ready.  She knows he is carrying some sort of guilt from his past, can she convince Caleb to forgive himself?  Angie continuously tells Caleb "Sometimes bad things happen to good people.  It just means we need to learn how to forgive and move on."  Will he eventually realize the truth behind Angie's words?  Could Angie show Caleb how to forgive?  Can Angie show Caleb that he deserved to have love in his life?

Then we have Emily.  Emily is Angie's best friend/roommate.  She is a firecracker, to say the least.  If you hurt Angie, then you hurt Emily and she is coming after you.  Caleb learned this very fast.  Emily had her targets set on Caleb.  She warned Caleb repeatedly not to break Angie's heart.  Could Caleb be trusted with Angie's heart?  Would Emily ever trust Caleb not to shatter her best friend's heart?

I have to tell ya, Forgiven was definitely an emotional ride.  I was laughing one minute and then crying the next.  The chemistry between the characters was amazing.  I could picture the storyline unfolding before my eyes.  There were times that I wanted to smack Caleb in the back of his head for his actions and his indecisiveness got on my damn nerves.  But I had to take a step back and realize that he is a 20 year old college student that experienced something that I would not wish upon my worst enemy.  He needed to work some stuff on his own and learn to love himself, before he could love Angie the way she deserved to be loved.

I think  Rebecca did a fabulous job with this book.  I think the storyline flowed effortlessly and I couldn't put the book down, because I was dying to know what was going to happen next.  I enjoyed reading from both Angie and Caleb's POV.  I got to see both sides of the stories and truly feel what they were feeling.  I am excited to see where the series goes next.  I loved all of the sub-characters.  Josh and Emily were great and they were great friends to both Caleb and Angie.  They stood by their friends and always offered them their shoulder to lean on or cry on.  Every person should have a friend like Emily and Josh.

This review was prepared by Heather.
I received an ARC in exchange for an HONEST review.


**GIVEAWAY**
a Rafflecopter giveaway
Posted by Naughty and Nice Book Blog at 1:36 PM