BLOG TOUR: OUT OF LINE by JEN MCLAUGHLIN 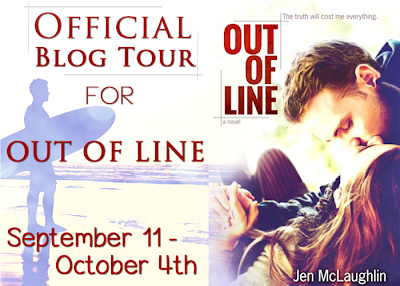 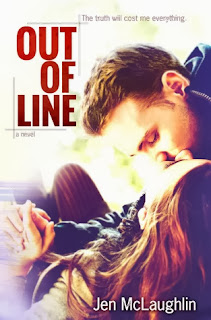 I've spent my entire life under my father’s thumb, but now I'm finally free to make my own choices. When my roommate dragged me to my first college party, I met Finn Coram and my life turned inside out. He knows how to break the rules and is everything I never knew I wanted. A Marine by day and surfer by night, he pushes me away even as our attraction brings us closer. Now I am finally free to do whatever I want. I know what I want. I choose Finn.

Trying to play by the rules...

I always follow orders. My job, my life, depends on it. I thought this job would be easy, all the rules were made crystal clear, but when I met Carrie Wallington, everything got muddy. She's a rule I know I shouldn't break, but damn if I don’t inch closer to the breaking point each time I see her. I’m ready to step out of line. And even worse? I’m living a lie. They say the truth will set you free, but in my case…

The truth will cost me everything.

Carrie Wallington just wanted to be a normal girl for a change. With her dad being a Senator in Washington D.C., she was always in the public eye. She hated it. She didn’t have any real friends. All the ones that she did have were either bribed or paid somehow to be her friend. Her father was very controlling and protective over every single thing that she did. She couldn’t truly be herself. She wanted to go off to college away from her parents, away from the life that she lived and start brand new where no one knew her history. Going to school across country would do just that. She would find out who she truly was. Hopefully.

Finn Corman has followed orders all his life. His mother died of cancer so it’s just him and his father. He is a Marine so he lives a very structured life. Living by orders is all he knows. His father also works for Senator Wallington so he needs to behave a certain way to uphold that image. Moving back to California is something he has always wanted to do. It brings back memories of his childhood with his mother and allows him to live a much more carefree lifestyle.

Carrie met Finn outside of a frat party. He is also the complete opposite looking of her, by the way he is dressed and the tattoos he is sporting Finn is just a Marine who loved to surf during his free time. Carrie loved that. He was free to be out in the ocean. Something she hadn’t experienced. Her father would die if she did something like that. So when Finn agreed to teach her how to surf, she wanted to start right away. She didn’t see the usual bodyguards that her father sent along with her so she sort of felt a little relief from that but she knew they were hiding and spying on her. She bought a board and a suit and Finn taught her how to surf. It was hard, but she was very persistent in getting it right. She felt free out in the ocean. Very liberating. No one could control her out there.

Carrie realized she was having a good time hanging out with Finn. He also rode a motorcycle. Another first for her. She is always careful in who she associates with, not only because of who her father is, but also because of the past she has had. She  put walls up because she has been lied to and betrayed before. She is not going down that road again.  But being with Finn brings out these feelings that she has never felt before. They have such a natural connection, it’s as if they've known each other for a long time. Finn feels it too. There’s something about Carrie that he enjoys. Spending time with her has become an obsession.

The more time they spend with each other the more the more personal they get. Carrie is not the normal stuck up rich person. She donates her clothes to fellow students, the poor and volunteer and the food shelter. Finn finds himself opening up to her freely and telling her things he wouldn’t normally tell anyone. He doesn’t open up to anyone. He doesn’t have a good past when it comes to women. But with Carrie, he feels as if he wants to tell her everything. He wants her to see her experience her freedom and he wants to be the one to help her. He is trying to fight the urge to take her and bury himself inside of her but he is trying so hard to control himself because he knows they can’t be anything more. They are too different. He can’t give her what she deserves and she deserves better than him. When he can’t resist any longer, there is no turning back. She can’t resist him either.

While Carrie is in school she meets a guy named Cory. Her father would definitely approve of him. Not only does he do well in school, but he comes from a well-established family. Carrie and Cory have several classes together and have become study partners and friends. However, on more than one occasion Cory has tried to make several moves on Carrie. He has even kissed her. But he doesn’t make her feel the same way that Finn makes her feel. But he’s not getting the hint that she doesn’t want him.

Finn doesn’t like the idea of the two of them hanging out together and feels nothing but jealousy. So he takes matters into his own hands. Everyone takes him for just a bum surfer but he surprises Carrie when he wants to help her study. He knows that by her spending time with him, she is taking time away from studying and he doesn’t want her to take time away from that, but he is selfish enough that he will help her, with an incentive of course. He cooks her dinner while she studies and he is going to play a game with her to help her study. With sexual incentives of course. That definitely gives studying a whole new meaning.

Things seem to be going well between Carrie and Finn. They are enjoying each other’s company. Things are getting hot in the bedroom. Heck they are even falling in love with one another faster than they ever thought possible. But what happens when one’s secret is revealed? Are they able to recover from it?

Will Carrie be able to forgive Finn from keeping his secret? Will they be able to move past it or will it bring an end to the both of them? Will it push Carrie and Cory closer together? Will Finn fight to keep Carrie if he truly loves her?

This book had me all over the place. My heart broke for Finn and the situations he was put in. I wanted him to be able to be up front with Carrie about his feelings for her but I knew he just couldn’t, as much as he wanted to. And I knew how hard it was for him to stand in the shadows and try to watch her move on. I wanted to scream at her so bad not to listen! My heart broke for Carrie as well. Living the life she did. She was just a girl who wanted a little bit a freedom in life. She didn’t choose to have that life, she was born into it and she had to deal with it. And it sucked that she was so used to betrayal. But I admire her for having the strength to deal with it all those years. I was really excited when they finally got their shit together and realized they belonged together. Then Jen throws another curveball at us again. I loved the book, I really did, up until I got to the cliffhanger at the end.  So now I am anxiously waiting for the next book to see what happens next! Good job Jen.

Jen McLaughlin is a New York Times and USA Today bestselling author. She writes steamy New Adult books for the young and young at heart. Her first release, Out of Line, came out September 2013. She also writes bestselling Contemporary Romance under the pen name Diane Alberts. Since receiving her first contract offer under the pen name Diane Alberts, she has yet to stop writing. She is represented by Louise Fury at The Bent Agency.
Though she lives in the mountains, she really wishes she was surrounded by a hot, sunny beach with crystal clear water. She lives in Northeast Pennsylvania with her four kids, a husband, a schnauzer mutt, a cat, and a Senegal parrot. In the rare moments when she’s not writing, she can usually be found hunched over one knitting project or another. Her goal is to write so many well-crafted romance books that even a non-romance reader will know her name.
Website: http://dianealberts.com/
Facebook Fan Page: https://www.facebook.com/DianeAlberts6
Twitter: https://twitter.com/DianeAlberts
Goodreads:  http://www.goodreads.com/author/show/6921962.Jen_McLaughlin

a Rafflecopter giveaway
Posted by Naughty and Nice Book Blog at 9:29 AM