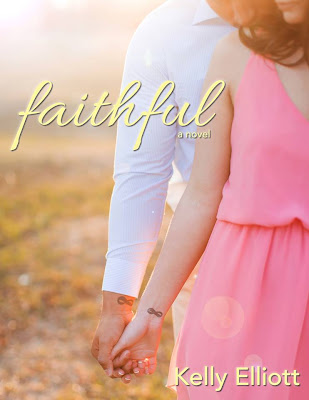 
No matter how faithful love can be…it takes only one moment to change it all.

After Heather Lambert’s parents died in a tragic car accident her senior year of high school, she refuses to let anyone into her heart for fear of being hurt again. Focusing only on school to follow her dreams of becoming an elementary school teacher, the last thing Heather intends to do is fall in love with Josh Hayes.

Josh knows the moment he lays eyes on Heather that she is the one he’s been waiting for. During months of obstacles and denied feelings, he is rejected by her time and time again.
When he finally wins her love, Josh and Heather start planning their future together…until Heather receives one bit of news she never wanted to hear again.

There has been a car accident.
Josh wakes up with no memory of Heather, and his ex-girlfriend, Victoria, is his nurse. Heather must decide if she’ll risk being hurt again and fight for the one man she loves with all her heart.

Will Josh remember Heather when she needs him the most? Or will Victoria take advantage of this opportunity, pushing Heather away from Josh for good?

Faithful is the third book in the Wanted series by Kelly Elliott.

I didn't think it was possible to fall in love with these characters more than I already am.  With each turn of the page, I fell deeper in love with Jefferson, Josh, and Gunner.  We were introduced to the girls when they were graduating high school and embarking on a new journey to college.  The guys were getting ready to start their senior year the University of Texas.   In Faithful, you will see the change in of each character, and how they have grown into mature adults.

As readers we have watched all of them go through highs and lows, and it was great to see them finally reach their dreams.  Each couple has found true love and more blessing than they ever anticipated.

"I didn't think I would ever find love, but you proved me wrong, Heather.  You said I rescued you, but you rescued me when you walked into my life." ~ Josh

Kelly gutted us with the Epilogue in Saved.  We were left hanging for months, not knowing whether Heather would get her happy ending.  We knew that Josh was in an accident, but we really didn't know the extent of his injuries.  We were left with a scene where Heather witnessed Josh proposing to some girl Victoria, who we knew nothing about.  For months we were left wondering and finally we found out the true meaning of that scene.

When Josh woke up from the accident, he knew his parents, and Victoria who was now his nurse in the hospital, but he didn't know the beautiful blond haired, blue eyed girl, who was holding his hand.  He felt an instant connection with her, but he couldn't describe his feelings, since he's never felt them before.   Josh knew there was something about her, and she took his breath away the moment he saw her, but he didn't know she was the love of his life.  Josh woke up thinking he was a sophomore in college and couldn't recall the last 4 years of his life.

Heather's heart shattered into a million pieces when she realized that Josh did not know her.  How could this be happening to her again?   Why does she lose everyone she loves? Heather already lost her parents in a motor vehicle accident 2 years prior, so this was her worst nightmare unfolding right before her eyes.  She could not lose Josh, he was her rock, her love, her best friend, her everything.  Josh was the air that Heather needed to breathe, he was the light in her darkness.

Victoria dated Josh while they were in college, however they had broken up.  Victoria took this as an opportunity to wiggle her way back into Josh's life, since he thought he was in college still and currently dating Victoria.  Victoria preyed on Josh and took advantage of Josh's situation every chance she got.

Heather wasn't going to lose Josh to Victoria.  She was ready to fight for him.  Josh knows there is a connection with Heather, and he wants get to know her again.  He wants to start off as friends, and see where things go.  Would Heather agree to this?   Would Josh fall in love with Heather a second time?  Was Heather strong enough to fight for what is hers?

Throughout Faithful, we get to see what has been going on with the rest of the gang.  Brad and Amanda are having marital problems, while Brad is struggling with a problem of his own.  Can Brad and Amanda get past this?  Can Amanda forgive Brad for what he has done?  Will Amanda stand by her husband through thick and thin?

Jefferson and Ari, are still my favorite book couple!!  As always, the two of them had me laughing out loud.  I absolutely LOVE them!!!  We didn't have any drama with Ari and Jeff, so that was quite refreshing.  They are VERY happy and fall in love with each other more everyday.  To see them as parents now, was great.  Jefferson is by far my favorite guy in this series.  I love his cockiness, his sense of humor, his personality, and not to mention his good looks.  Ari and Jefferson's relationships was solid in Faithful and the love they have for each other was heartwarming.  Ari is still a firecracker and doesn't take anyone's shit.  If you mess with Ari's friends, you are picking a fight with Ari.  All I'll say is, Victoria better watch her back!!

Gunner and Ellie are enjoying being parents.  Ellie find out a few things about Gunner that she didn't know.  Everyone has a past, including Gunner.  Can Ellie handle Gunner's past or will her insecurities get the best of her?

In Faithful all the men stepped up the romance skills.  I was cracking up at extents they would go to in order to try and out romance Gunner.  At times, I think some of the men did and Gunner's reactions are priceless.  The men showed how romantic they could be, but is Gunner up for the challenge?

Jefferson holds my heart, but Josh came very close to stealing it.  Josh has a heart of gold.  My heart broke to see Heather and Josh not together.  She fought for so long to guard her heart, to never allow herself to love anyone, like she had loved her parents, for fear of losing them as well.  After seeing the struggles Heather and Josh went through in Saved, I was routing for them.

Will Josh regain his memory and know who Heather is?  Sometimes people never experience the love Heather and Josh had for each other.  Is it possible to fall in love with the same person again?  Could their love be stronger than it was the first time they fell in love?

We get a little drama from Jessie and Scott, so I am anxious to see where their story leads us.  Love is NEVER easy, will Jessie open her heart up to Scott?  Will Scott run from his feelings again like he did when he was younger?

I absolutely LOVE this series!!  Kelly kicked ass with Faithful.  You can see the growth of the characters in this book, as well as the growth that Kelly has made as an author.  Faithful flowed effortlessly and I was captivated from the first page of the Prologue.  For those of you who have not read this series yet, I suggest you do.  You will fall in love with the characters and their stories.

ONE CLICK AND GET YOUR COPY OF WANTED,
SAVED AND FAITHFUL!!

a Rafflecopter giveaway
Posted by Naughty and Nice Book Blog at 9:23 AM