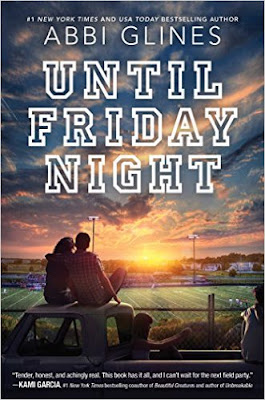 To everyone who knows him, West Ashby has always been that guy: the cocky, popular, way-too-handsome-for-his-own-good football god who led Lawton High to the state championships. But while West may be Big Man on Campus on the outside, on the inside he’s battling the grief that comes with watching his father slowly die of cancer.

Two years ago, Maggie Carleton’s life fell apart when her father murdered her mother. And after she told the police what happened, she stopped speaking and hasn’t spoken since. Even the move to Lawton, Alabama, couldn’t draw Maggie back out. So she stayed quiet, keeping her sorrow and her fractured heart hidden away.

As West’s pain becomes too much to handle, he knows he needs to talk to someone about his father—so in the dark shadows of a post-game party, he opens up to the one girl who he knows won’t tell anyone else.

West expected that talking about his dad would bring some relief, or at least a flood of emotions he couldn’t control. But he never expected the quiet new girl to reply, to reveal a pain even deeper than his own—or for them to form a connection so strong that he couldn’t ever let her go…

Until Friday Night was definitely a different story line from Abbi’s other books, but like Abbi fashion, she killed it! This was a page turner. I kept saying, just one more chapter and BAM! It was two am and I was forcing myself to bed. From the very beginning of the book, I felt every single emotion that Maggie and West went through, every gripping one. Keep tissues handy. Just saying. Abbi will toy with your emotions on this one, like put you on a roller coaster ride. She will make you laugh, she will make you cry, have your heart teetering, drop a little, make it fall in love, maybe a little crack, and maybe put it back together again and get the fuzzies. But in the end, reading this book will be all worth it.

“I needed someone to know my pain. Someone to understand it.”

After witnessing one of the most horrifying moments of her life and losing the person she loved the most, Maggie Carleton felt the only way she could cope would be to go mute. Her godmother finally shipped her off the only family she had left, the Higgen’s. Her Aunt Coralee is worried about her being in a new surrounding, in a new school with no friends, so she has her cousin Brady act as her babysitter since they are pretty much the same age. Maggie feels she can handle things on her own since Brady feels put off by the idea of having to watch her, but is grateful for his help once she realizes how lost she gets in the school. Maggie finally realizes that starting a new life in a new environment is going to be tough, especially when she doesn’t talk. Making friends is sure going to be a tough one. Getting her cousin to like her is going to be much tougher.

“This was the first time I really saw him, the guy he didn’t reveal to anyone. His mask was gone, and there as heaviness in his voice and darkness in his eyes.”

West Ashby is the go to guy. The one that every guy wants to be and the one that every girls wants to be with. He’s a star athlete, has a way with the lady, and is loyal to his friends and has a great love for his family. But under it all, he’s hiding it from everyone that his father is dying. The same father that loves football just as much as he does. He’s even kept it from his best friend, Brady, but he doesn’t know how much more he can hold in. As the days go by, he has to watch his father deteriorate and watch his mother cry over the fact that she will lose the love of her life. What will he do then? What will she do when that time comes?

“Don’t mind me. I’m just tired of acting like I give a shit out there. I needed to be alone. Since you don’t talk, that makes it better. Someone I can talk to who keeps quiet. Might be fucking perfect.”

West and Maggie seem like complete opposites to the public, but yet they hold such a deep connection to one another. A connection, no one but themselves can explain. West is going through some difficult times in his life with his dad that no one, not even his mom realizes that he is feeling. But yet Maggie sees right though him. It’s like she can tell just by one look at him. She can see right through him. She takes it upon herself to help him, even if that means breaking her silence.

“You’re talking to me. Why me?”“Because you needed me to. You need to know someone else has lived through pain like yours.”

“She gave me peace. She was the only thing that had given me peace in a long time.”

West is surprised when she speaks to him, but it’s a secret that is shared between the two of them. He realizes that it’s her way of coping and he finds a way to help her heal from the past. The field is their spot, much different than the football field. But it's a place where they both can be themselves. They fall into a fast and easy friendship, providing each other comfort and peace. She is slowly making a way into his heart. Brady and their friends are shocked with this new friendship since West doesn’t do friends, while Brady warns Maggie to guard her heart constantly. As their friendship slowly develops, so do other feelings. West is known to use girls to help cope, causing insecurities to rise on Maggie’s end. But with everything that West is going through, she bottles them in and pulls through for him. He needs someone to be strong for him right now and she’s that person.

“I didn’t remember what hope felt like. It had been so long since I’d hoped for anything.”

“It never leaves you…The hurt.” “But you learned to live and you learn to deal with the loss. You do what you have to survive.”

I absolutely loved this book. There isn’t enough to put into words how much I loved this book and everything I felt about it. I’ll just have you read it for yourself. I’m hoping she continues more books about this series at a fairly decent pace haha. I would love to hear a story about Brady next…. Maybe??? Abbi?? Please???

Abbi Glines is the New York Times, USA TODAY, and Wall Street Journal bestselling author of the Rosemary Beach, Field Party, Sea Breeze, Vincent Boys, and Existence series. A devoted book lover, Abbi lives with her family in Alabama. She maintains a Twitter addiction at @AbbiGlines and can also be found at Facebook.com/AbbiGlinesAuthor and AbbiGlines.com.