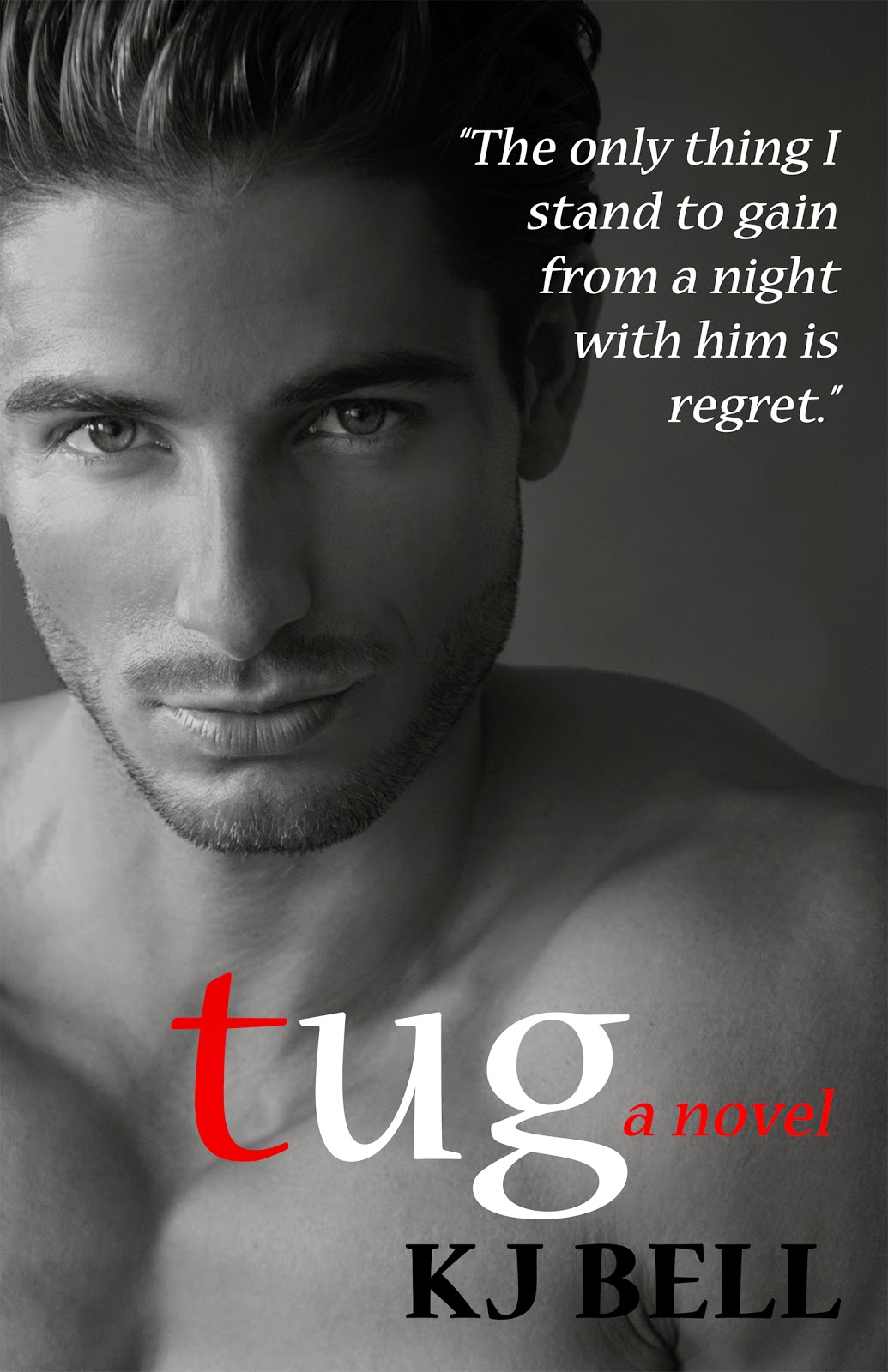 Blurb:
Aidan Hunter lost the only girl he ever loved to his older brother. To numb his pain, he drinks in excess, parties too hard, and sleeps with countless women. When his family expresses concern, he does what he's been taught to do—fake it and pretend his life is perfect. Pretend he loves his new girl and pretend his heart isn’t broken.
Maria Santiago is simply trying to survive each day until she finishes college. As a single mother, life is a constant struggle. Add running from a dangerous past and working in the oldest profession, and all she has is hope for a better life. Hope one day she will no longer feel shame and hope her past never catches up with her.
After Aidan pays to spend one wild night with Maria, pretending to be unaffected by her is impossible. Their night comes to an explosive end and Maria hopes she never sees him again, but Aidan refuses to give up. As Maria begins to accept that Aidan’s feelings for her are genuine, someone from her past threatens her life. Aidan’s not intimidated and takes a huge risk to protect her.
Will the risk pay off and allow Aidan the opportunity to provide Maria with the better life she’s been hoping for? 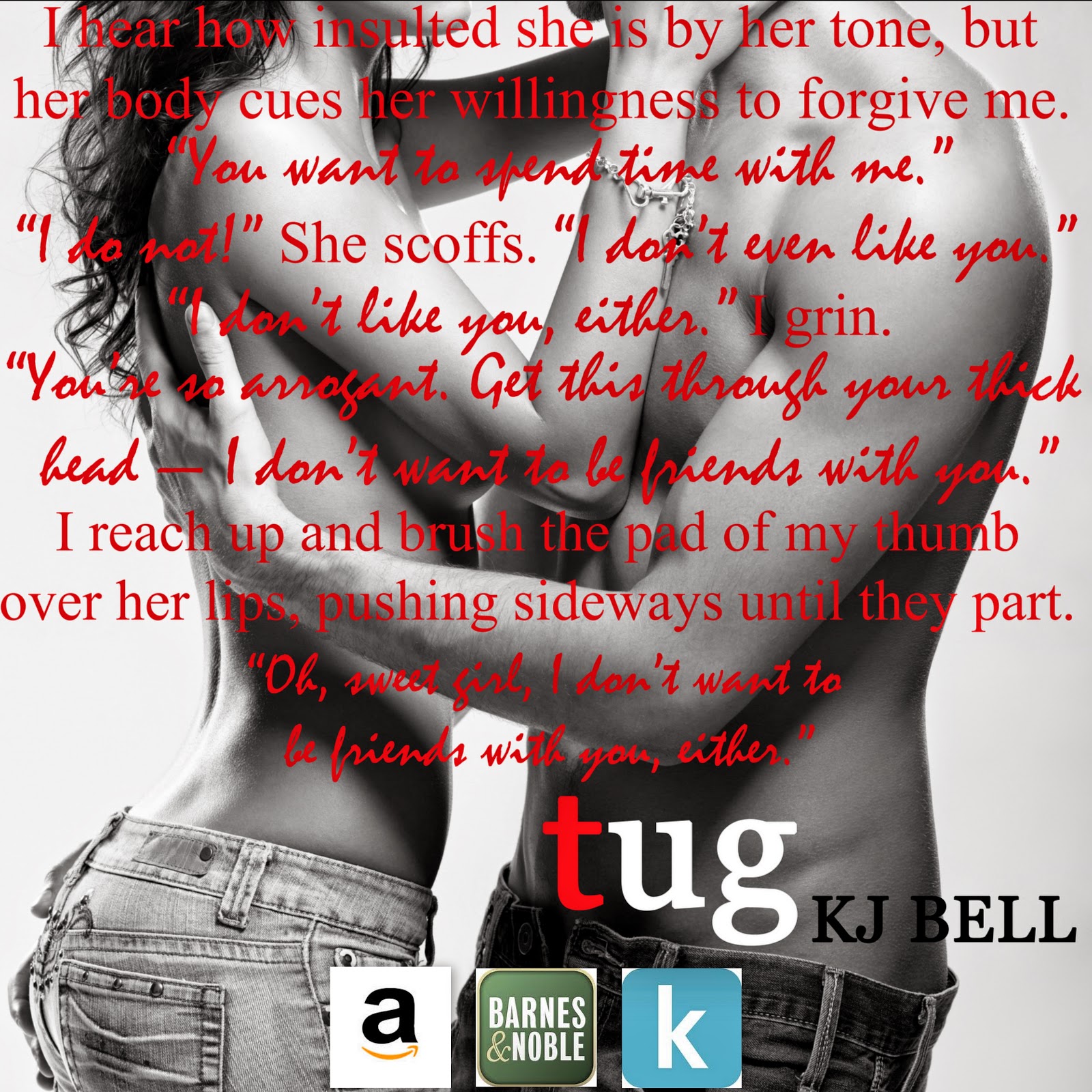 OMG! How do I even begin to write my review for this book?!! I finished reading this book and it left me speechless. I reread it again shortly after and even with knowing exactly what would happen, it still left me in complete shock. I have been a fan of Aiden “Tug” from the very beginning and was hoping he was going to get his own book. And to see him grow from a playful guy to an arrogant, cocky but sexy and sweet asshole was very satisfying to see. This book sure put me through one hell of a ride of emotions and KJ completely threw me off guard at every turn. I was completely hooked from the very beginning and was craving more even at the bitter end.
Note: This book can be read as a standalone, however, to read about a much younger Tug and how he became the man he is in this book, I HIGHLY suggest you read the Irreparable Series.

Tug has been in love with Tori, his brother’s fiancé for as long as he can possibly remember. He almost had her, and that one night almost changed his life forever. But it was one mistake that caused him to become the man he is today. Her heart never belonged to him, but to his own brother and he will have to endure seeing her love someone other than him. Tug never fully recovered from Tori’s rejections and continuously drank and slept with countless women. His reckless actions are putting his job at risk as the board is prepared to vote him out of his CEO role if he doesn’t present himself in a much more mature and stable fashion. If he doesn’t buckle up and at least pretend to show some maturity, he could lose everything he has worked so hard to build. With the perfect role model, he comes up with the perfect plan to make it all happen.

Maria has always had a difficult life growing up and she is doing what she can do to get by. While going to college, caring for her ill grandfather, and raising her son, she is working at the one job she hates but will keep her financially afloat. She doesn’t have very much family or friends in her life since she is constantly on the move trying to care for everyone. She can only wish for happiness in her life, but when her past catches up to her, that type of future seem inevitable. Since that chance meeting with the arrogant Tug, she can’t seem to get him out of her mind and when she sees him again at her job and he pays for a night with her she can only hope that after one night with him she can get her fix and forget him forever before she gets too deep. But who are we kidding? Who doesn’t love a sexy guy with a cocky mouth and how the heck can you forget him so easily?

“No..no lips anywhere. It’s too intimate. I have to be able to forget you when this is over.” ~ Maria

At first Tug uses Maria to hurt Tori, to get back at her for not choosing him. Clearly he is still not over the hurt. But his intentions backfire when he realizes he can’t get Maria out of his head and he has hurt her completely. That one night with her was the start of something. It made him feel things he hasn’t felt in a very long time and he wants to feel that again. He felt alive. All Maria wanted was one night with Tug and wants to erase him from her life. If he gets involved with her, he isn’t safe. No one is safe. Tug wants more with Maria, however, he has been a complete dick to her.

“You make me feel like there’s not enough time in the day, like I can’t get enough of you, and if I blink, I’ll miss something incredible. I don’t want to miss anything.” ~ Tug

After much persistence, Maria sees that Tug truly cares for her and her son and decides to see where there relationship takes them. With his experience with his nephew, he is a natural with her son and is pretty much treating him as his own. With Maria in her life Tug’s life has changed for the better. His work has improved and she has brought life back into him. It’s as if he has a purpose to live. It’s great to see a much sweeter and caring man, aside from that cocky dickhead we are used to. He wants to be able to protect them and give them everything they want and need.

“I’ve always been the wild child, the risk-taker who acted without thinking, the daredevil. I’ve finally met the one person who can keep up with me, challenge me, and also take the big plunges in like with me. When I’m with Maria, I know I was never lost or broken.” ~ Tug

Maria, however is running from her past. A past that will slowly catch up to her one of these days considering Tug is in the public eye. And when that secret is out, no one is safe. Tug tries to have her lay it all out on the table and reminds her that secrets and lies is what his whole life consisted of and he can’t have that in his life no more. Maria has no choice but to confide in him and pray he doesn’t leave. But he doesn’t. He will risk his own life to keep them safe, no matter what it takes and that is what she is afraid of. Maria has lost enough people in her life that she loves already, she can’t survive it if she were to lose Tug. In the process, Tug uncovers a part Maria’s past that she isn’t aware of, and one that she is still getting used to. And when you think everything is normal and happy, there’s the hustle.

But what happens when the one person you were once afraid of is the one person you will run to? Will they be able to work out whatever it is that’s going on between them? Can they find their way back to each other and have the happiness that they both deserve?

I absolutely LOVED Tug in this book. You get his normal cockiness, you even see his playboy side, but then you see a more tame side of Tug. A very sweet, caring and sensitive side of him we all know and love. But this time we see more of it and to someone who truly deserves his love and gives it back. I love Maria! She is a perfect match for him because she sure doesn’t put up with any of his crap, calls him out on it and challenges him to the bone. I loved how we got the other characters in this story as well. I loved hearing about Brady and Tori, although there was a part in there where I wanted to bitch slap Tori, but it’s all good now. Loved reading about Brady's bandmates "Second Chances" and where they are and Liv (Tug and Brady's sister) and Harrison. Man, I want to hang Harrison by his balls if it’s at all possible. There is so much going on in this book that is keeps you completely engaged till the very end. But yet, not enough drama to make your head spin. KJ is such an evil woman, let me warn you all for the way she has you hanging at the very end!!!! I need the second book like now!!!! I can’t wait till it releases!

This book was reviewed by Jenn. I received an ARC for my honest review. 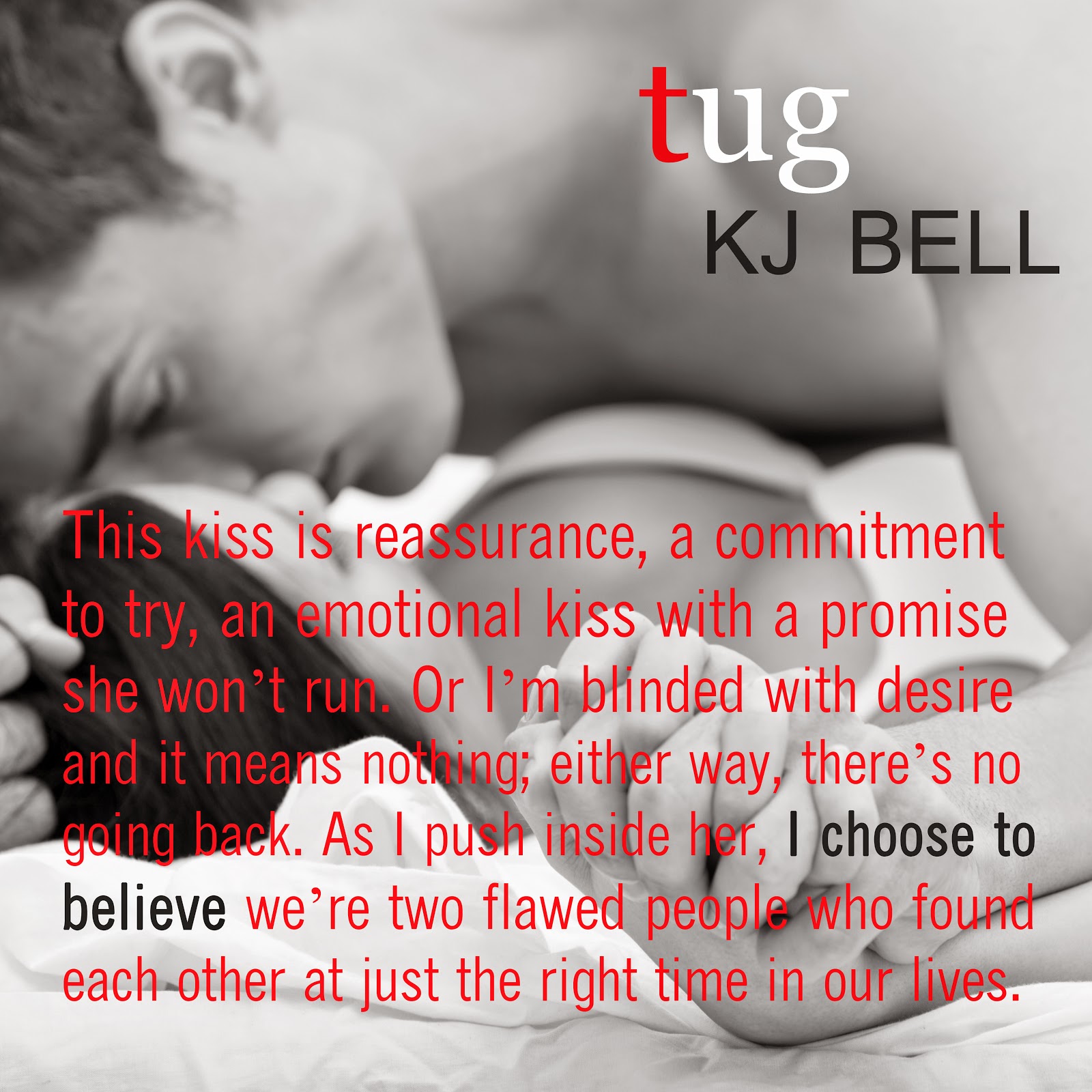 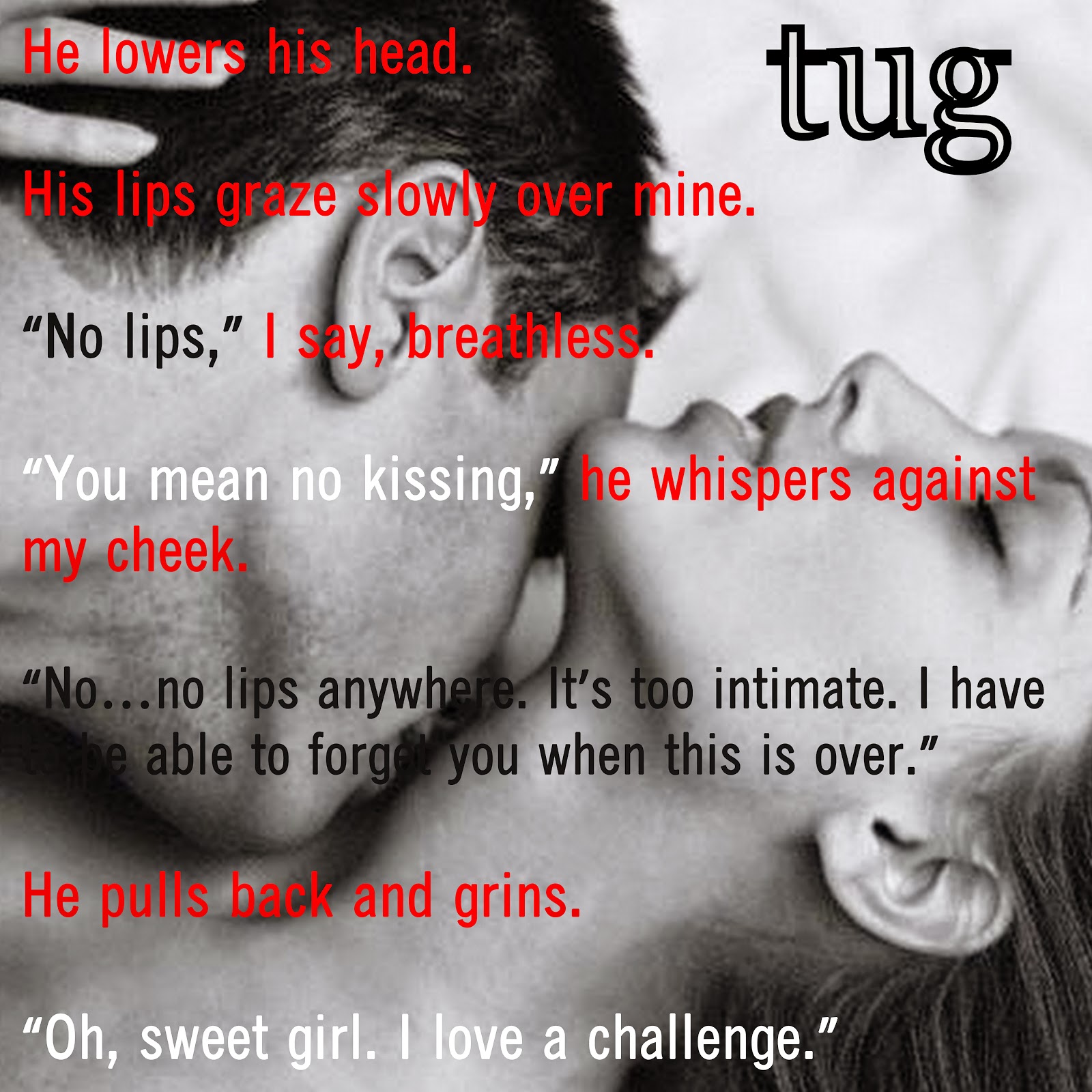 Giveaway link:
Contest will run from June 26th to July 26th. One of five signed paperbacks of TUG One of three signed paperbacks of Cut Too Deep One of three Amazon $10 gift cards As an extra incentive, if KJ will break the top 100 paid, or reach 100 reviews on Amazon, KJ Bell will giveaway a Kindle Fire HD.
https://docs.google.com/forms/d/1Nsm2NeYVBWLfpt3L1GroNAu1OUA5bCQ3sjoF6XBhzDk/viewform
Posted by Naughty and Nice Book Blog at 10:05 AM