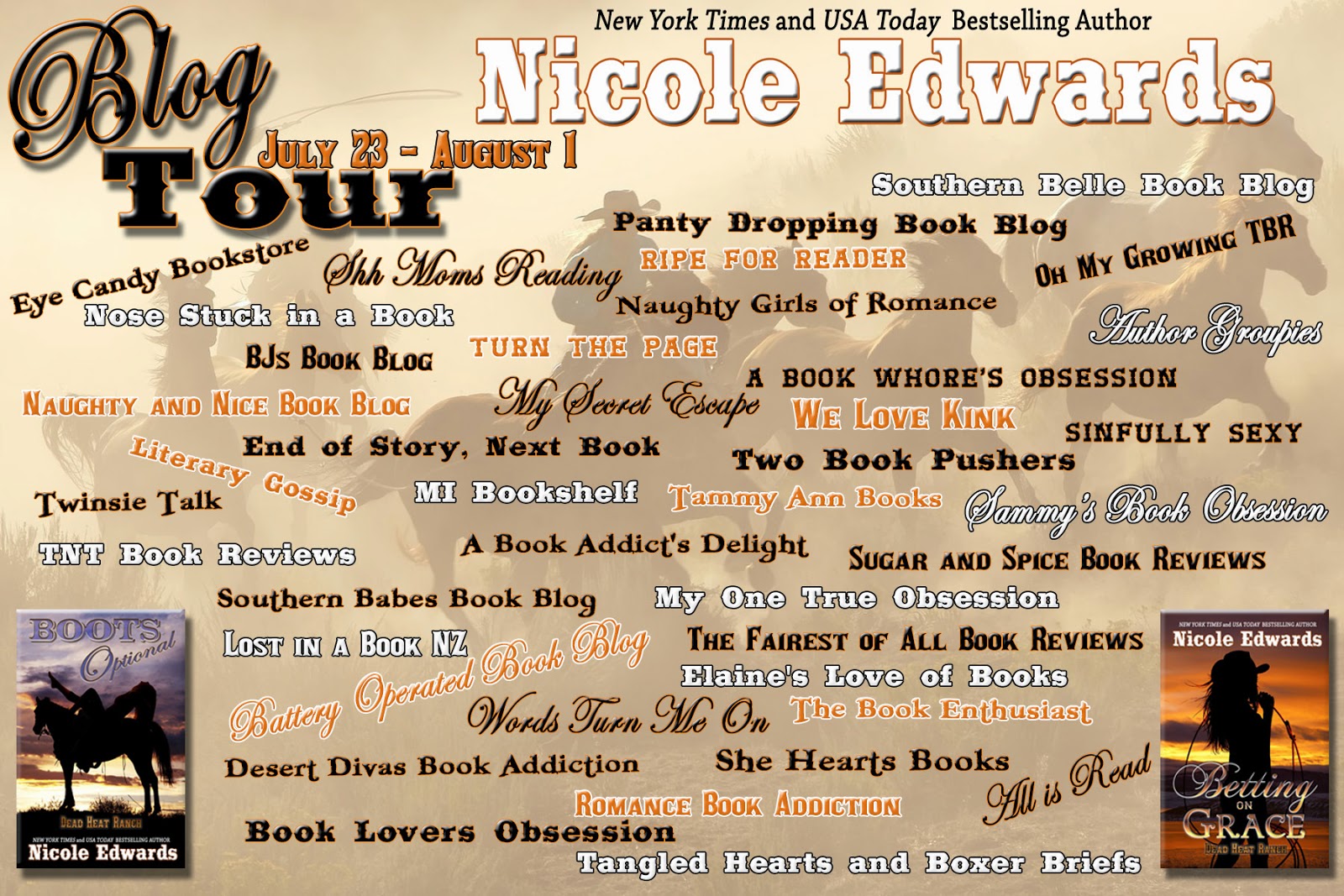 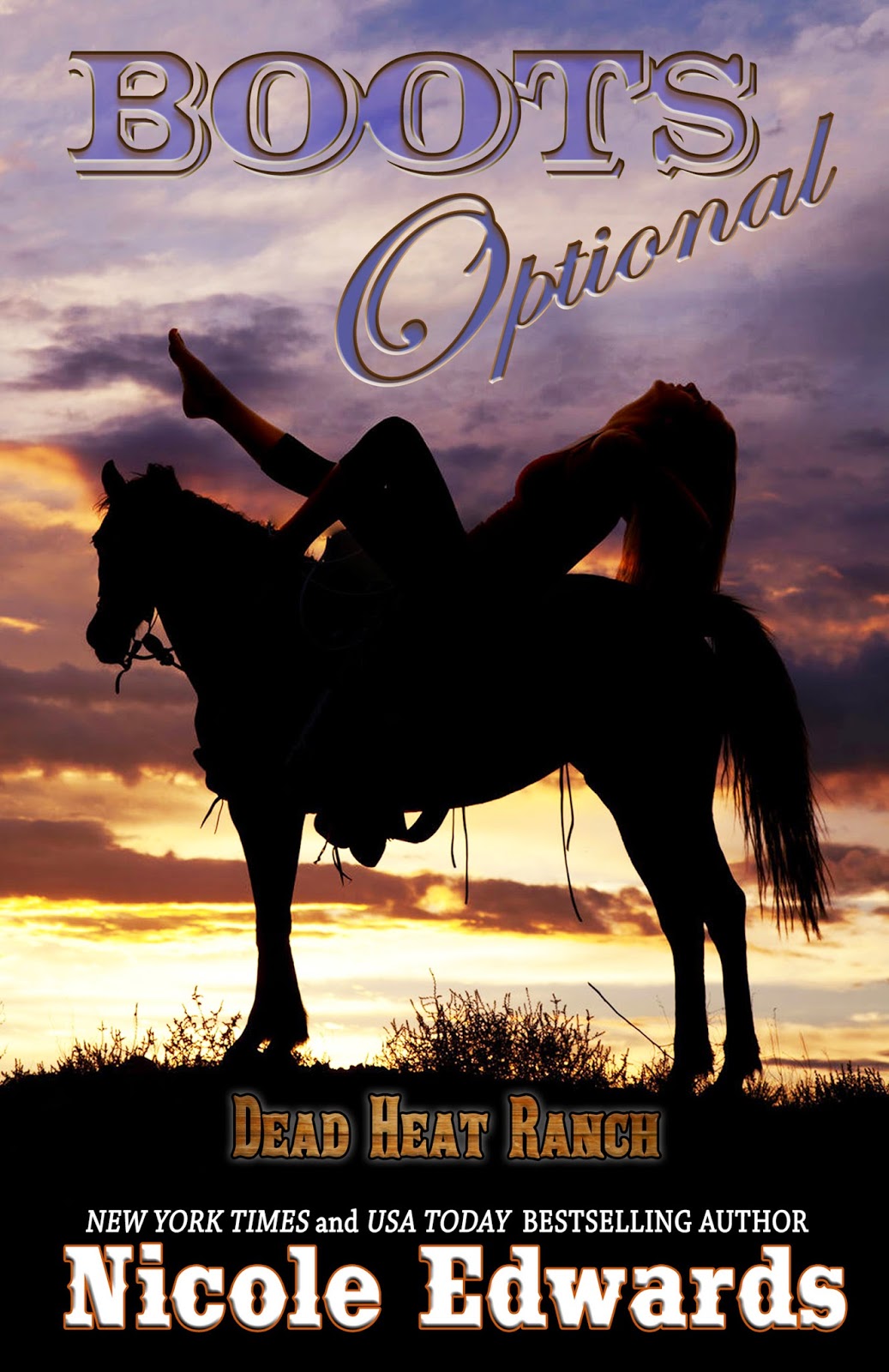 Note: This novella was originally featured in the Some Like It Hot Anthology. Although this story has not changed, this novella contains a bonus scene, along with an excerpt from Betting on Grace, DHR #1.

New York Times bestselling author Nicole Edwards is heating things up with Boots Optional, a sexy new ménage novella which is the first book in a hot new series called Dead Heat Ranch. Grace Lambert is familiar with hard work, long days, and handsome cowboys. She’s been working for her family’s dude ranch since she was old enough to ride a horse and she’s not afraid to get her hands dirty. What she is afraid of is the heat that’s been generating between her and not one, but two sexy cowboys who’ve set their sights on her. And each other.

Grant Kingsley and Lane Miller have both had their eyes on Gracie for years, but the feisty cowgirl has managed to keep them at bay. As far as they are concerned, cowboys don’t give up, and neither of them is ready to give up just yet. Not on her and not on the heat that transpires between the two of them.

Find out what happens when the sultry Texas nights get as hot as the fierce Texas days. 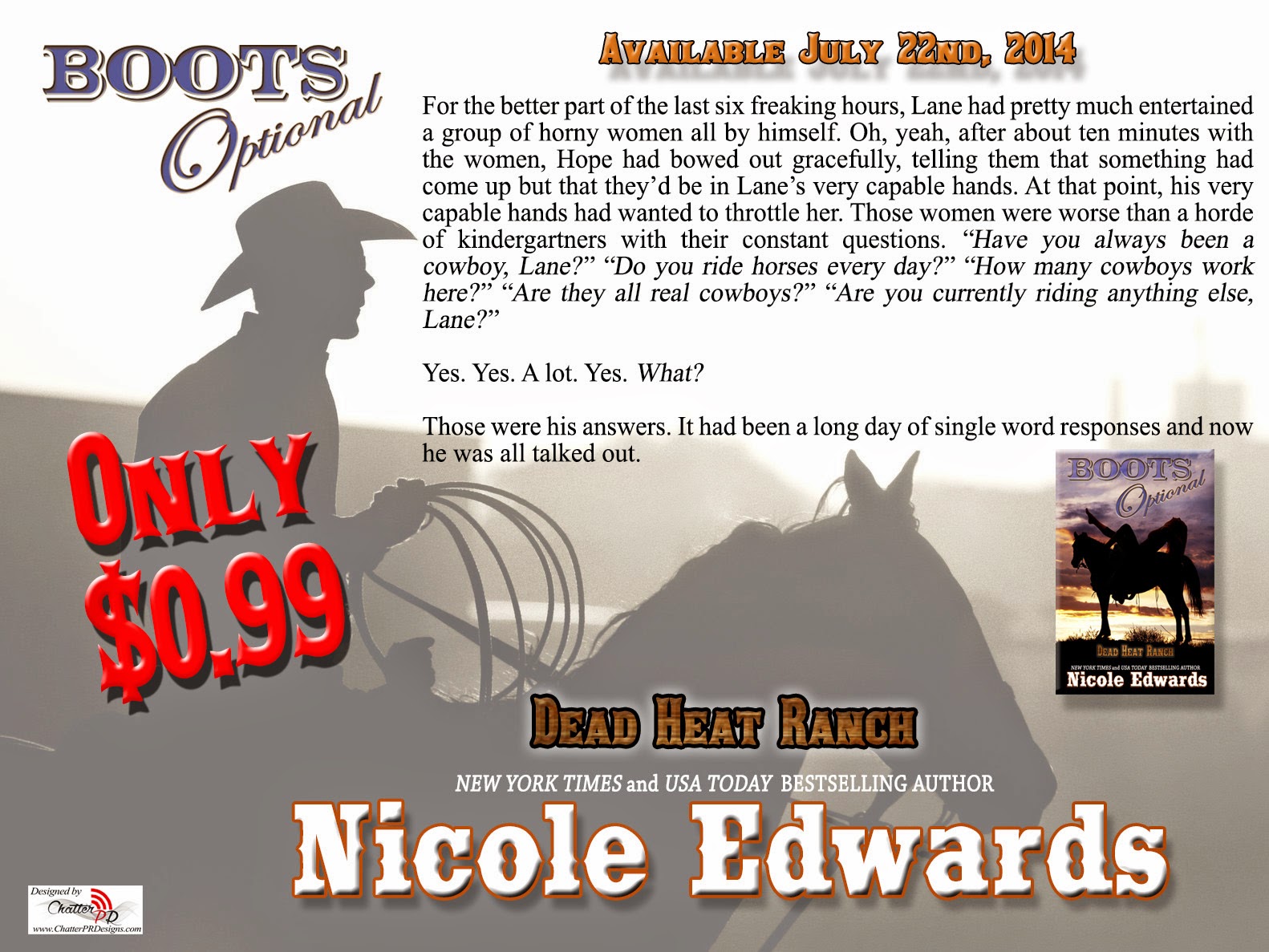 Nicole Edwards never lets me down.  With each book that I read, I am captivated and left wanting more.  Boots Optional was a quick read and I am excited to get Betting On Grace on July 29th..  Boots Optional sets up the series by introducing Grace Lambert and her sisters, not to mention to hot cowboys, Grant and Lane.

Grace is attracted to both Lane and Grant but has been fighting her feelings for years.  Grace always tried to keep her distance from Lane and Grant, but after getting an eyeful one Friday night, she can't look away.   She can't stop thinking about them, she can't get that vision out of her mind.

Boots are optional according to Grant.  Grace can either keep them on or take them off, either way, Grant and Lane will do the damnedest to get the rest of Gracie's clothes off.  Will Gracie see where this goes?  Can Lane and Grant convince her that "they" are with the effort?  Things won't be easy for the three of them, but are they all willing to trust each other and take the plunge.

Nicole Edwards never ceases to amaze me.  I am a HUGE fan of her work.  With every book she writes, she delivers yet another STEAMY novel, one that you will not be able to put down. The chemistry between these three is evident.  We can see it, but will Gracie see it?

This review was prepared by Heather.  I received a gifted copy of Boots Optional from the author to participate in the blog tour and provide an HONEST review. 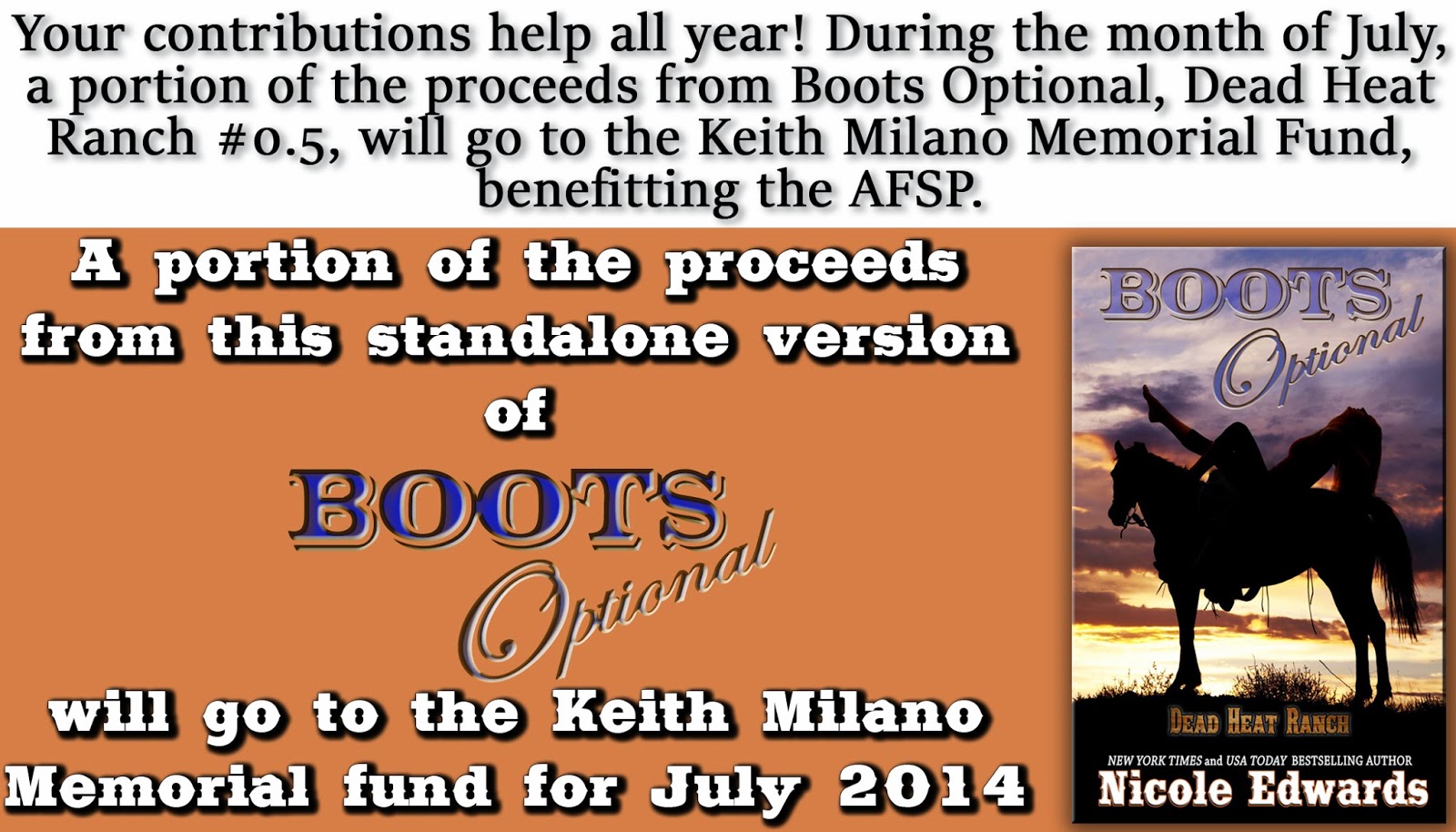 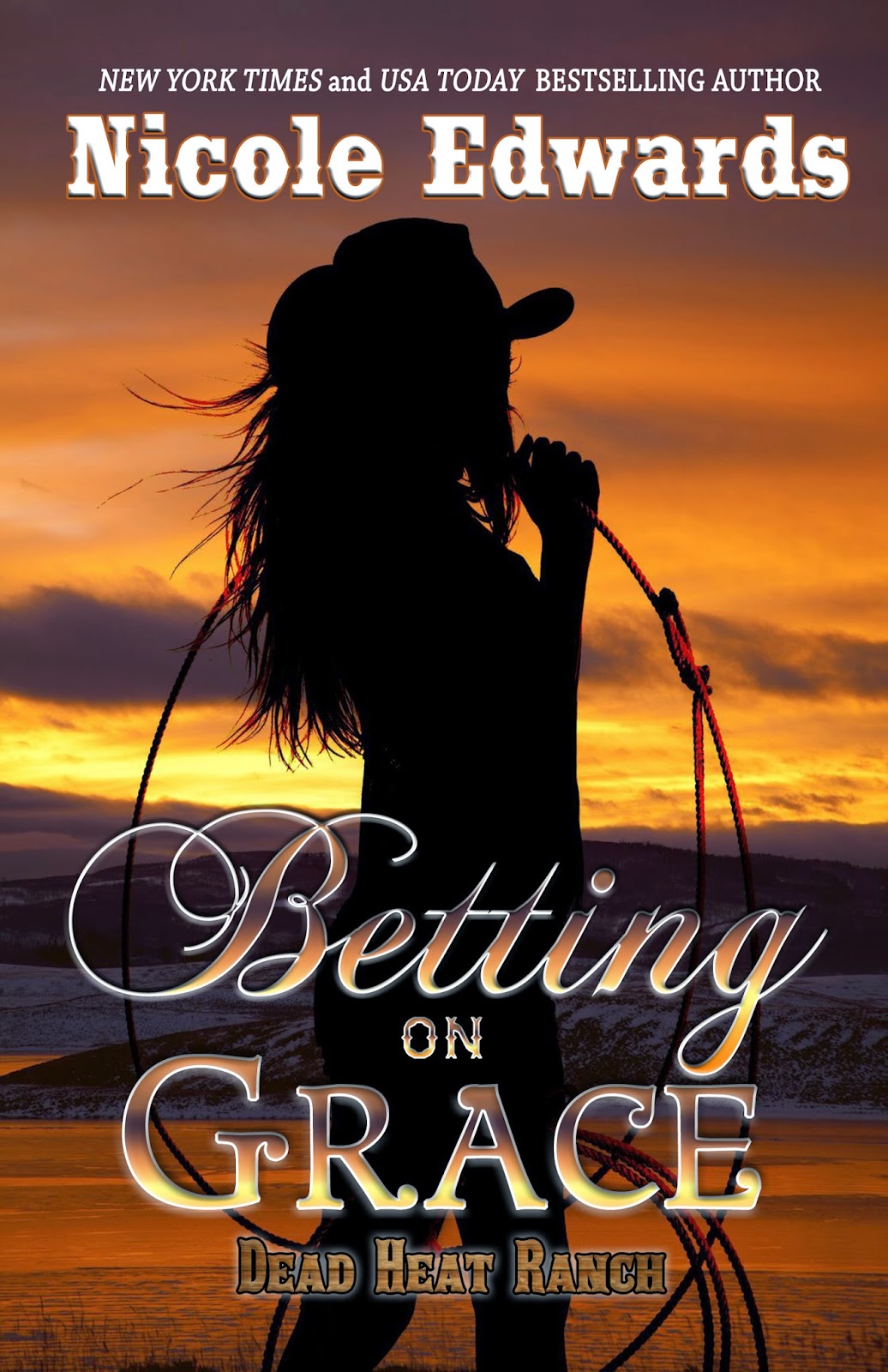 New York Times bestselling author Nicole Edwards is continuing to heat things up with Betting on Grace, a sexy new ménage novel which is the first book in a hot new series called Dead Heat Ranch.

The tables have turned on Grace Lambert. For a woman familiar with long days and hard work, she just recently discovered just how hot the sultry Texas nights can get. Finding time to spend with her two smoking hot cowboys, Grant and Lane, isn’t exactly easy, but she’s forging ahead with what has turned out to be the hottest relationship she has ever been in. The true test comes in standing up for what she wants.

Grant Kingsley has landed his feisty cowgirl, Gracie, and an equally sexy cowboy, Lane Miller, but everything outside of his romantic life has gone from routine to chaos in a matter of days. Unfortunately, he’s become rather acquainted with Murphy’s Law as he is inundated with a string of bad luck. His mother is missing, his father, a gambling addict, is worried about only one thing these days, and when Grant refuses to give in, all hell breaks loose on the ranch.

Lane Miller will be the first to admit that he falls in love easily. And he’s done so again, with both Gracie and Grant. Only this time around, he’s not giving up or giving in. Cowboys don’t know what it means to back down and Lane will ensure that the two most important people in his life get all of him, no matter what it takes. 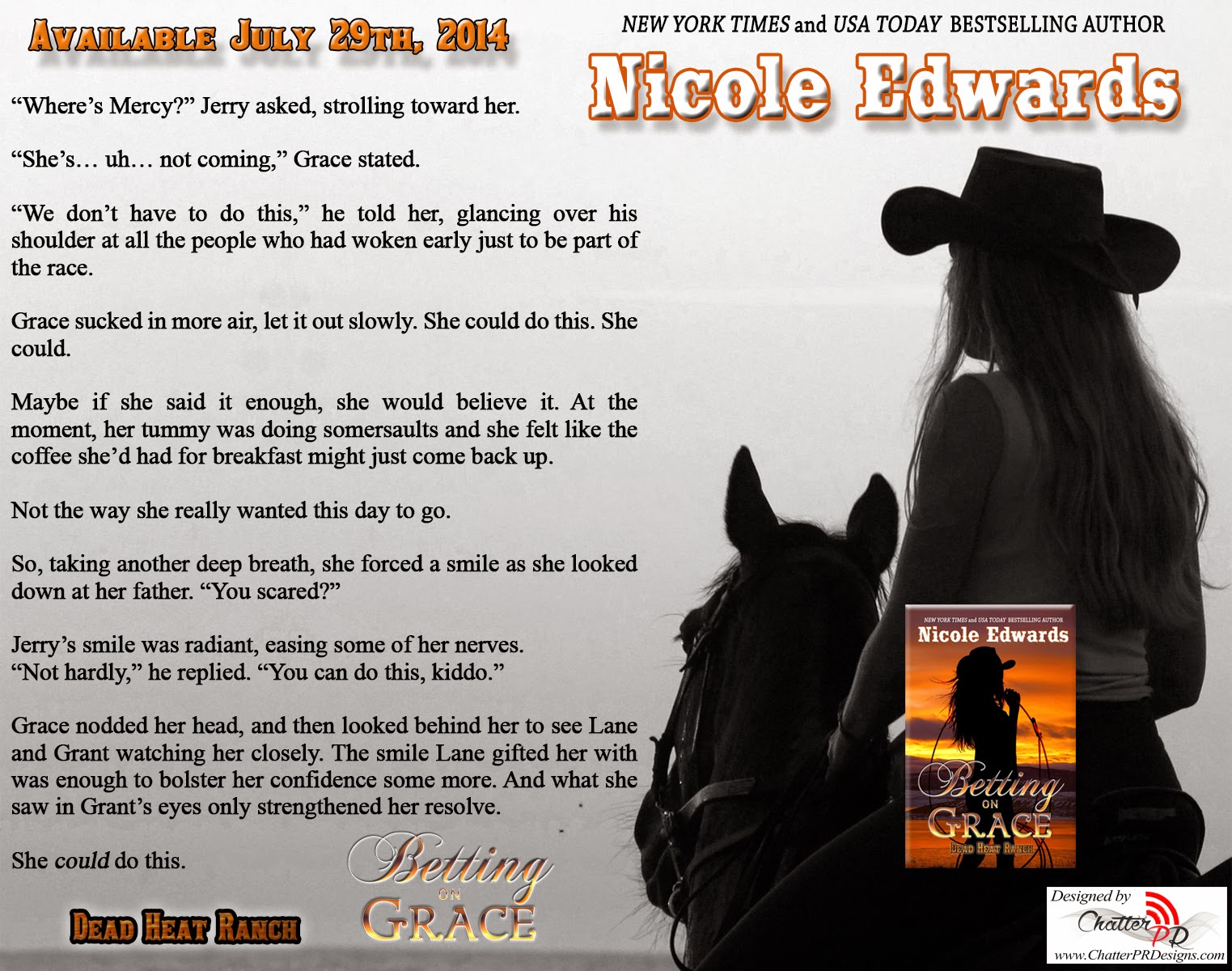 Nicole is a New York Times and USA Today bestselling author who was born and raised in Texas. Married with three kids and four dogs, she has plenty of interaction to keep her imagination brewing. Her books have been featured in USA Today’s Happy Ever After segment as well as Indie Reader’s best seller list.  She has forged her way as an independent author.