Twenty-three year old, Kamryn Cunningham has left all she’s ever known and moved to a small town where no one knows her name, who her parents are, or her social status in the horseracing world. Months after opening her own bakery and evading attempts of being set up by her new best friend, she meets Brody. But Kamryn fights the instant pull between them because there’s a detail she can’t dismiss. Brody’s married.

To say that twenty-six year old, Brody Saco has had a rough marriage would be an understatement. After marrying his pregnant girlfriend, he spends the next six years in a relationship filled with hatred, manipulation, and guilt involving a tragedy that happened five years earlier. When he keeps running into his sister-in-law’s best friend, Kamryn, he can’t ignore that she makes him feel more with just one look than his wife ever has; and soon he can’t continue fight his feelings for her.

When staying apart proves to be too difficult, Brody and Kamryn enter a relationship full of stolen moments and nights that end too soon while they wait for Brody to file for divorce. But the guilt that comes with their relationship may prove to be too much for Kamryn, and Brody might not be strong enough to face the tragedy from his past in order to leave his conniving wife. 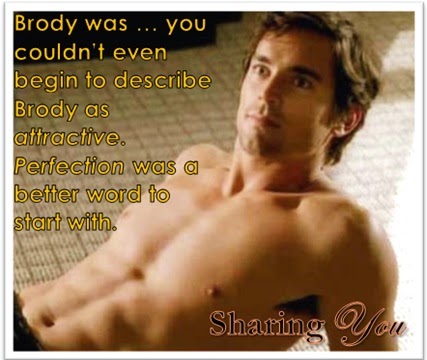 Sharing You: Why I wrote about a taboo subject

When I decided to write this story, I had people telling me not to. I had a lot of: “Uhh … are you sure you want to write about that?” “Maybe you should consider something else…” and “No, no. Absolutely not. Women will hate you.”

Well, considering I already had a lot of women mad at me over a certain male character and a scene that shall not be named in chapter 13 of a certain book … I was willing to have them hate me all over again. I don’t want to just write stories that will please people. I want to write real life. And Sharing You is real life.

Sure, we hear stories of cheating, and automatically we curl our lips at the thought. “How could he/she?” “What a home-wrecker.” “Poor (insert name here).” It’s the automatic thoughts that go through our heads, right? I know it’s what goes through my head every time. And it’s what went through my head when my husband told me about his work partner and his girlfriend I would be meeting that night. I’m pretty sure I yelled “What?!” really loud, said a few no ways, and had a disgusted look on my face. I was determined not to meet the girlfriend, and to forever hate my husband’s partner.

I had my arms crossed and a scowl on my face the entire drive to the restaurant, I was mumbling to myself, and I asked my husband how he could be so okay with it about fifty some odd times. And then I met them … and everything that had been going through my mind suddenly shifted. Now, before I continue, I should probably say I do not condone cheating. I feel like if you would cheat on your significant other, you should leave them before you do something with another person. But I could not help but get captured in a moment with this couple. I have quite literally never seen a couple more perfect for each other.

We started hanging out with them more and more, and one night, the girlfriend—we’ll call her “S”—told me all about her story with “R”. From the very beginning, to where they were at that point. It was heartbreaking, I cried with her, and I felt every emotion pouring from her over to me. I listened to the heartache they went through to be together, and witnessed how much this had taken a toll on them. I loved their story. Still wasn’t a fan of the cheating … but their love for each other … that’s what I loved. I was able to witness them finally getting married, and it is the only time I’ve been so moved by a wedding other than my own. R & S belong together, and that’s why I asked if I could write their story.

Because sometimes it’s not as easy as just blaming the “other woman”. Sometimes there are other things that come into play that we may not see/hear about. Like a very bad marriage that you feel trapped in. Sometimes the people who are suffering the most are, in fact, the ones cheating. My hope is that you can see that, and see why I decided to write their story despite the hard topic.