BLOG TOUR - INTERVIEW WITH THE HARD TO LOVE YOU GANG !!!!!

HARD TO LOVE YOU INTERVIEW

Naughty and Nice Book Blog would like to welcome the group from THE LOVE SERIES to our stage.
We're going to start off by putting Mason on the hot seat.  *Mason grumbles* You have always tried to protect your family.  You have always put your family first.


Did you ever stop and think that Hailey wanted you to put her first for once?
*Mason glances over at Hailey baby bump*  "I thought I was putting her first. I mean I know it didn’t look like it but I was trying to keep my promise to her. I don’t make promises I can’t keep."

You do realize that when you are in a relationship that your actions no longer just affect your, that they affect the one that you are with. By you keeping what Lily told you tore you and Hailey a part.  If you were given a “do over” how do you think you would have handled the situation?

*Mason glares at Jenn and Heather*  "I don’t think I would have changed anything because like I said I don’t break my promises but I would have made sure Hailey had no doubts about us. She wouldn’t have had to ever second guess us."
We know you promised Hailey no more secrets, because you didn’t want her to feel like she needed to keep things from your family. Why didn’t you just tell her, the secret didn’t have anything to do with you and Hailey? We’re pretty sure Hailey could have kept that to herself, until you had an opportunity to speak to Cooper.
*Mason rolls his eyes*  "Because I promised I would never ask her to keep a secret. It didn’t matter if it didn’t have anything to do with us. I know Hailey could have kept it to herself but it wouldn’t have changed my mind."

Why did you think what Lily had to say would cause so much drama? What Cooper did, happened more than three years ago. There was nothing you could do to go back and change that. So why did you feel it was that important to keep it from Hailey as well as Cooper?
"My sister deserved to have the best damn wedding there was. She and Hunter have been through enough shit to last a life time. They deserved to be carefree and happy. They didn’t need a dark cloud looming."

Why didn’t you talk to Cooper when you first found out?

*Mason glances over to Cooper*  "Look at the source. I didn’t know if she was making that shit up or not."
Why didn’t you fight harder to get Hailey to understand what was going on? You wanted her to see what your eyes were telling her, but your mouth was never telling her what she needed to hear?

*Hailey reaches for Mason’s hand*   "No words would have helped. Hailey had already made up her mind and once she does that, there is no making her see things differently. We were already on shaky ground with all the things we kept from Kenzie and Hunter, the ground shook a little too hard and fell."
Did you think Hailey could move on from you that fast, when you saw her at the bar with Cole?
*Hailey clears her throat. Mason looks over at her and smiles*  "It didn’t matter if she moved on or not, I was coming back for my girl."


When you walked up to Hailey at the bar and put your arms around her waist and told her to listen to the words of “Changed by You”, my heart broke for you.  How did you feel when Hailey walked away at the end of the song and walked up to Cole?
"Honestly, it killed me but it was my own damn fault."


Mason, when you found out that Hailey was pregnant, you asked her if the baby was yours. Did you think that Hailey was sleeping with other men, while the two of you were apart? Did you think the baby could have been Cole’s?
*Hailey lifts Mason’s hand and rests it on her belly*  "No I didn’t think it could have been Cole's because I’d seen him around town and shit. I was worried about Logan though, I was getting updates on her and Logan seemed to be moving in."


Are you comfortable with Hailey’s relationship with Cole, considering they are only friends?
"Yeah, Cole’s cool. He’s kind of making his way into our lives a little more than I like but he’s a good guy."

Now we are going to turn our attention to Hailey. *The corner of Hailey’s lip curls up* You didn’t think you were going to get off easy now here, did ya? Mason has been there for you for years. He has always been there for you when you needed him, even when you were just friends and not in a relationship together. Why didn’t you give Mason the opportunity to explain himself when you saw him in the corner with Lily, before you ran off?
*The smile falls from Hailey’s face*  "My mind was already made up. Mason has never kept me in the dark and from my view it looked like a lot more was going on in that corner than there was."


Why did you doubt Mason’s love for you?

*Hailey takes a deep breath*  "No one has ever really loved me."  *Mason whispers, “Boo,” Hailey shakes her head and tries to smile even though there are tears in her eyes*


Why did you even give Brittany and Lily the opportunity to get into your head? You knew what they were about. You knew that they loved to cause drama. Why didn’t you have rational conversation with Mason before you decided to destroy his house and his belongings?

"The way they were talking, they never missed a beat. I wasn’t able to go to Mason’s away games, I didn’t know what he did in his free time. I didn’t think Mason would ever hurt me like that but I couldn’t pull my head out of my ass and really think."

*Hailey and Mason both nod*  "Like Mason said, our love isn’t sweet and simple. It’s loud and messy and we wouldn’t have it any other way."


Hailey, do you regret the way you reacted to this entire situation?
"Yes. I wasn’t looking at the bigger picture. I lost my way with Mason."

After seeing how yours and Mason’s relationship was built. It appeared that you always found comfort in Mason’s arms, whether it was just a hug or even when you were climbing in bed with him at his parent’s house. I always thought that was something special between the two of you. How did you find it so easy to replace Mason’s arms with Logan’s arms when you went to Virginia to get away?

*Hailey cringes*  "I could never replace Mason’s arms but I was in a bad place when I arrived at Benny’s. I was crying every night, I wasn't eating, I was barely living. Logan was a friend and he was there for me. He helped me see that things could be ok."


Hailey, if you and Logan were just friends, why did it bother you so much when he brought a girl back to his room that you slept in the tub?


"Logan got pissed of because I was going home.  I think he thought there might actually be something between us, but I wasn't ready to move on from Mason.  I thought Logan and I were in a better place."

Have you spoken to Cole lately?

Let’s see how Hunter and MacKenzie are doing.
Are the two of you excited for the birth of your second child?
MacKenzie: "I can’t wait to meet my princess."
Hunter: "Umm, no. I’m scared shitless to have a little girl."
How do you think Ryder will be when the baby is born?


After hearing what Mason was keeping from everyone, how do you think everyone would have reacted to it, if he had told everyone the night he found out?

*Hunter and MacKenzie’s brows go up in surprise*   "You guys know what happened but we don’t?"


Have you and Hunter given it any thought about pursuing charges against Brittany for running you off the road and causing your accident?
Hunter: "We’re handling it in our own way."

MacKenzie, when Mason and Hailey weren’t together, how did you manage to stay neutral between the two? At times, it appeared you were angry at Mason, but you still managed to love them both through this trying time.

"They are both important in my life; I’ll love them no matter what. I may not agree with all the shit that’s happened but at the end of the day they are my family and I love them."

*Hailey wipes away a few tears*

When Mason swore to you that he never cheated on Hailey and told you that he had told Hailey everything that happened that night, did it make you angry that Hailey still refused to believe Mason?

"No because honestly I think I would have acted the way Hailey did."
Did you think Mason kissed Lily at the bar that night?

Cooper do you wish you would have pushed Mason more to tell you what happened that night?

"Knowing what I know now yeah. The thing with Mason is once his mind is made up about something that’s it. There is no changing his mind."

How do you think Jaylinn is going to handle this news?

"Time will tell. I’m afraid this may push her too far."
Hunter:  "What the hell is going on?"  *Hunter glares at Cooper*   "What the fuck did you do to my sister?"

*Cooper looks down to the floor.*

Do you think your relationship with Jaylinn is strong enough to get past this?
"I hope."


What exactly is going on between the two of you? Do you even have a clue?

*A smirk breaks out on Cooper’s face*  "Yeah I know exactly what is going on."


Well it looks like we need to wrap this interview up. Mason, we may have grilled you with questions, but we love ya.  You and Hailey frustrated the hell out of in Hard to Love You.  We can only hope that Cooper and Jaylinn's journey isn't going to be as bumpy as yours and Hailey's was.  Thank you for stopping by Naughty and Nice Book Blog and feel free to stop by whenever you have a chance. 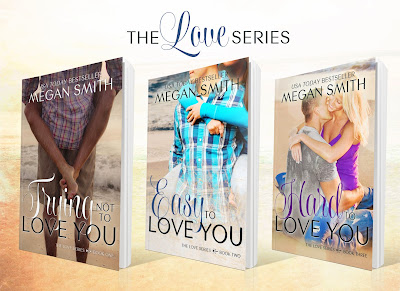 IF YOU WANT TO READ THIS SERIES, CLICK THE LINKS BELOW!!!

Email ThisBlogThis!Share to TwitterShare to FacebookShare to Pinterest
Labels: INTERVIEWS