BLOG TOUR - Have I Told You by F.L. Jacobs 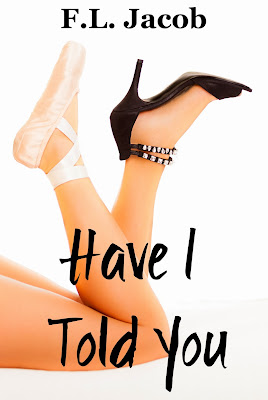 
Caston Black has it all, according to the outside world. The owner of the best-selling gentlemen’s magazine, Black Hollywood, has good looks, fame, fortune, and a reputation that precedes him. He can have any woman he wants, as long as he doesn’t keep them. Caston sets his sights on Sabrina for his next Hollywood Sweetheart. Little does he know he will find the woman to share his life, the one he is meant to keep forever.

Sabrina Bennett has been in a mentally and physically abusive relationship that has destroyed the beautiful, confident dancer who arrived at college three years ago. She thinks the only good thing left in her life is her abusive boyfriend. Keeping her boyfriend happy is her number one priority, no matter how impossible. She’s been broken and molded into a frightened, unsure girl desperate to be worthy of love.

Meeting by chance one evening, sparks fly between Caston and Sabrina. Neither expected the feelings they bring out in each other. Trying to have a normal relationship in their abnormal world is almost impossible, happiness is a new way of life for the lovers. They want to move forward, but the past won’t let go.

Can Caston help Sabrina heal from her past abuse? Can Sabrina show Caston he is as strong as he appears to be? When is the price of love too much? What do you do when the biggest threat to the person you love is you?

I prefer to read books in the Romance genre. I realize that the books I read are fiction.  They are not "real" therefore, all of the scenarios that play out before me do not have to be "realistic".  So with that being said, I can honestly say that I enjoyed this book.  I could see where for some people this might be possible and it didn't turn me off of the story.   Do I think that I could meet someone and move in with them immediately. NO !!!  Could I fall in love with someone in such a short period of time. NO !! But who I am to judge someone who could.

Have I Told You is an erotica book and there is plenty of sex that will captivate your attention.  In Have I Told You, you will meet Caston Black, a very wealthy good looking guy who owns his own magazine, Black Hollywood.  Black Hollywood obviously is a play on words, but it a magazine similar to Playboy.  Sabrina caught Caston's eyes at a dance recital many months before they actually meet.  Caston sets his sights on Sabrina for his next Hollywood Sweetheart.  Only Sabrina has no clue of his plans.

Sabrina Bennett is in a horrible relationship with a guy who mentally and physically abuses her.  She doesn't think she deserves better and stays with him because she has no where else to go.  One night her boyfriend decided to cause a scene at a party, only this time, someone was there to defend Sabrina.  Caston saw the way Sarbina's boyfriend was treating her and put and end to it.

Obviously, Sabrina found Caston attractive.  Who wouldn't?  Caston seems to be Sabrina's night in shining armor.  A connection begins to build between the two and sparks begin to fly.  The sex between the two is HOT.  I could picture their relationship unfolding before my eyes.  Will Sabrina open up to Caston?  Will Caston open up to Sabrina?  Both of them have a past.  Will they be able to move on from their pasts and build a future together?  Can they trust one another with their pasts?


Caston feels the need to protect Sabrina.  Sabrina has never had someone love her, protect her, cherish her.  Caston vows to do all of the above, but will someone try and stop him from having a relationship with Sabrina?

There was some twists in this book that you will not expect and have you a little shocked.  At least I can say I was shocked by a few.  Everyone has a past, some may be darker than others.  I was shocked to find out some of the things that Caston has been a part of.  Caston is very "proper" with the way he articulates things and how he presents himself.  He appears very mysterious at first, but as he begins to shed his layers, you get to know the "real" Caston and I enjoyed his character.

I enjoyed this book and I am looking forward to see what the future hold for Caston and Sabrina.  I will warn you, there is a cliffhanger, which will leave you wanting the second book in the series.

He set my hand on his thigh and returned his hands to the steering wheel.  Feeling very brazen, I decided to move my hand up his leg.  Coming into contact with his hardening length, I tightened my grip.  His breath caught in the back of his throat and he stretched his neck.  I unzipped his pants and slid my hand in, touching him skin to skin.  Pulling him free, I slowly scooted over to take him in my mouth.  The groan he let out was magnificent, and made me take him to the back of my throat.  Working my tongue up and down I could taste his salty precum, I sucked harder.  I wanted to taste more.

Suddenly, he pulled the car into the back of a gas station.  I moved my mouth faster, and he growled, as his fingers tangled in my hair.  The pleasure I was giving him made me smile around his cock. 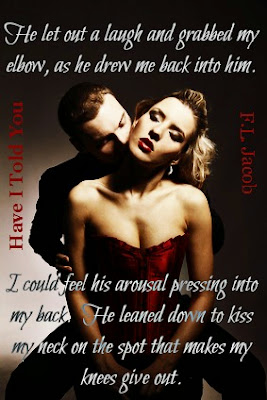 
I am a mommy of two, wife to an amazing man, and full time employee. Life is crazy and my love for reading had fizzled over the years but thanks to a wonderful group of ladies that I met last year I started reading again. Their love for books turned me on to many great writers who I would have never discovered if I hadn't started reading again!