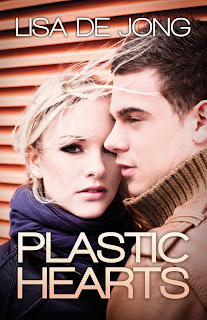 I was given an ARC for an honest review.


Lisa says it best…..  “Love isn’t about what you have or who you know.  It’s about how you earn what you have and how you treat those you love.  The material things don’t matter, when your heart is full of joy and contentment.”

Plastic Hearts is about a girl named Alexandra Riley, who has always lived her life to please others.  Alex’s parents had her entire life mapped out for her, right down to the college she would attend, her college major, even the men she was going to date and one day marry.  Alex grew up in a FAKE society where Plastic Hearts Rule.  “Plastic hearts are made so they cannot be broken.  Cracked maybe, but never broken. They made decisions based on outward appearances and ignored all emotion.”  That was applied to all aspects of Alex’s life, even her relationships.


Upon returning to NYU from her Christmas break in The Hamptons, Alex decides she needs a night out dancing with her college roommate/bestfriend, Jade.  While engrossed in the music, and dancing to the beat, a pair of hands grip her hips and she felt a large hard body pressed up against hers.  Little did Alex know, these hands were not her boyfriend, Ryan's, rather they belonged to a 'Sexy Stranger" with a fabulous body, a pair of electric green eyes and a cocky smile.

This “Sexy Stranger” was Dane Wright.  Dane was everything that her parents told her to stay away from.  Dane did not “fit” the type of man that Alex’s parents had expected her to date or marry one day.  Dane was not one of the “elite” from Greenwich, CT where Alex grew up.   There was just something about Alex that Dane was drawn to.  Maybe it was the fact that Alex was the first girl to say she wasn’t interested in him.


Dane usually ran from relationships, he never allowed himself to get close to people.  Dane couldn’t avoid what was already there between he and Alex, and for the first time in his life, he was just going to allow himself to feel…. Was is fate that brought the two of them together than night in the club?

Alex had felt more love with Dane that she had ever felt in her entire life.  She had experienced more in life with Dane in the few months they were dating, then she had in her 19 years of living.  Dane showed Alex a side of herself that she didn’t know existed.  Dane accepted the “real” Alex.

Throughout the book, Alex struggles with doing what her heart tells her to do or living the life that her parents expect her to live.


Alex was backed into a corner and faced the worst kind of choice.  Cave in to those who think Dane is a living nightmare and not worthy of her… or hold her ground and risk EVERYTHING for the one man that she can not live without.


*  Will Alex let love change her life?
*   Dane was the half that made Alex whole, but would Alex allow
herself to become whole?

*   Is it true that LOVE can conquer ALL?

Dane Wright is wise beyond his years.  I think the two most important things I will take away from this book, are the following quotes from Dane:

“Sometimes when life hits you with too much, it makes you stronger and you learn from it.  I know where I want to go while some of my friends don’t.  Life has brought me maturity.  I make my decisions based on who I don’t want to be, rather than whom everyone else wants me to be.  I always want to be better.  It  took me time to see this, but it’s true.”

“We’re adults now, Baby.  When you become an adult, you get to choose your path.  You take all the things you learned while you were on everyone else’s and use it to build your own, but it’s about where your heart wants to go.  It’s all up to you.”


I have to say that I completely fell in love with Dane Wright.  He is such a sweetheart and wants nothing more than to see Alex live the life she chooses.  The love he has for Alex is undeniable.  My heart broke for Alex to see her struggle with the fact that her family would never accept the man she loves.


Life is a series of choices and every choice has a consequence.  You only live life ONCE, so make the choices you make COUNT !!!!  Always follow your heart. Live life with NO regrets as it can all be taken away in a blink of an eye.

I give this book 5 stars and I recommend this book to others.  I look forward to reading  more of Dane and Alex's story as it continues in Glass Hearts in the Summer 2013.
Posted by Naughty and Nice Book Blog at 9:25 AM