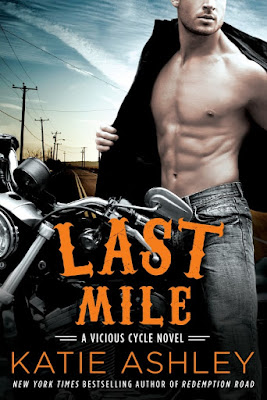 After her father was murdered in the line of duty, ATF agent Samantha Vargas is determined to take down the scumbags of the drug trade. When her partner takes on a case to infiltrate the Hells Raiders MC, Samantha agrees to go undercover as his old lady but is surprised to find herself drawn to the very man she is investigating.  Benjamin “Bishop” Malloy has worked hard to carve a place for himself both in and out of the MC world. Working days as a mechanic, he spends his nights rebuilding motorcycles with the hope of one day owning his own shop. After taking one of the club’s new hang-arounds under his wing, Bishop is conflicted over his growing attraction for the man’s girlfriend.  Even though she’s determined to bring down the Raiders, Samantha discovers their world isn’t as black-and-white as she thought. And as the stakes grow higher, she’s in danger of losing more than her heart.
AMAZON

This being the final book of the Hells Raiders Series, I couldn’t wait to get my hands on it. And boy did Katie Ashley deliver. It sure was a whirlwind of emotions, but I held on strong till the very end. Once you pick this book up, there is no stopping point. This is one you won’t want to put down. Bishop Malloy will definitely capture you from the get go. He sure did for me.

My heart broke for Samantha Vargas and all that she had to endure. The memory of what happened with her father will always haunt her forever, just knowing what happened gave me chills. But she rose from it all and became such a strong person. Though because of her father’s death, it made her stereotype the biker gang. She only saw them as bad people. Her mission in life, avenge her father’s death and put the bad guys behind bars. Little did she know her option on bikers would change.

Bishop Malloy…. Where do you begin with him? The last of the Malloy brothers to settle down, the one who won’t settle at that, bagging any girl that would practically look his way. He’s the fun-loving, jokester, who can’t be taken seriously, but has a soft spot for his family especially the babies. When the club is trying to go clean he has his own goals in mind, but won’t really share it with anyone because he knows no one will take him seriously. But when he sets his eyes on a girl, things start to change for him. She’s different than the rest of them. She’s also off-limits.

Samantha and Bishop can’t fight their attraction to one another. They get to know one another, something Bishop normally doesn’t quite do with women but it feels natural with her. He’s come to tell her all his secrets, his goals, his dreams, about his family, and even things about the club he is not supposed to be telling people. Samantha is taking every single bit of information she is being fed about the club and is using it to her benefit. But the more she talks to Bishop, the more she hangs around the gang, the more her feelings change. She sees that they are not who they are portrayed out to be. They truly are trying to be clean. They are amazing people. When is enough enough???

Samantha is torn because she has a job to do, a revenge to take, but she’s living a double life. She is deceiving a lot of people. Their attraction for each other grows stronger and stronger. When the truth comes out, all hell will break loose. Is it worth all the risk? Samantha will bound to lose something in the end. Which will prevail?

I fell hard for Bishop after getting to know more of his story. There is much more to him than he gives off and Samantha definitely saw that in him. I can see the chemistry between the two of them. My heart went for Samantha in this book. There were so many instances where I wanted to just hug the crap out of her. The amount of loss she had to endure. But yet, she’s proves her strength time and time again. She’s one damn tough woman that’s for sure, and she gives Bishop a run for his money. She's a great match for him. It was great seeing the rest of the group in here, always joining forces. This family does stick together. One click this, you’ll fall for them too.

This was reviewed by Jenn. I received an advanced copy for my honest. review.

I rose off the picnic bench. As I set my longneck down, I could feel Bishop’s eyes burning into my back. When I glanced at him over my shoulder, his eyebrows rose questioningly. Slowly, I turned around. As I met his blazing baby blues, I held out my hand. His body shuddered slightly before he leaned up to put his hand in mine. I tugged him up off the bench, pulling him close to me.
His warm breath against my cheek, causing me to shiver with building anticipation. “What are you doing, Sam?”
Without a moment’s hesitation, I replied, “Getting you to take me somewhere we can be alone.”
He pulled back to look at me. Both longing and regret flickered on his handsome face. “You gotta know that nothing good is gonna come with me being alone with you right now.”
“I know.”
“And you’re okay with that?”
It was the same question raging through my mind. Did I want to fuck Bishop to get in even deeper with him because of the case or was it because I was starting to feel more for him than I should? In the end, I tuned out the voices in my head. “Yeah, I am,” I responded, my voice resonating with certainty.
With a brief nod, Bishop tugged on my hand and started leading me away from the others. We went around the back of the clubhouse and then passed the pawnshop. As we continued walking, the lights grew dimmer and dimmer until we found ourselves in shadowy darkness. Bishop stopped us in front a tall chain-link fence that ran the length of the property.
After gazing around, I swallowed hard. I’d never had sex out in the open before, and I could feel my once firm resolve slowly fading. “Here?”
“It’s really the only place we can be alone with all the brothers being in from out of town. I gave up my room in the clubhouse.” A lustful gleam burned in Bishop’s eyes as he pulled me against him. I could feel the hardened length of him through his jeans. “But if you want, I’ll put you on the back of my bike and take you anywhere you want to go.”
Deep down, I knew it was right here and right now, or I was going to lose both my nerve and my buzz.I brought my arms up to wrap around his neck. “I just want to be with you.” I drew his head down to where our lips were almost touching. We stayed like that for a few seconds, both of our chests heaving and our bodies trembling. This was our figurative cliff, and we were just inches from free-falling off it. Before we could think any more about it, Bishop crushed his lips against mine.
For such a hardened, tough guy, his lips were so very smooth. They felt as soft as velvet as they moved against mine. I tightened my arms around his neck, drawing him as close to me as I could. My breasts strained against the bulging muscles of his chest.
I couldn’t seem to get close enough to him. I had to fight the urge to jump up and wrap my legs around his waist and grind myself against him. As his warm tongue entered my mouth, I moaned. He proved within seconds he was one hell of a kisser. He was also one for multitasking, because as his tongue caressed mine, his hand palmed my breast through the fabric of my dress. My nipple pebbled under his fingertips, and I gasped when he pinched it between his thumb and forefinger. While one hand continued to knead my breast, the other dipped below the hem of my dress. I sucked in a breath when it skimmed against my thigh before journeying farther upward. It had been too damn long since a man had touched me, and as Bishop’s hand cupped me, my head fell back, banging against the fence.
“Fucking hell. You’re drenched,” Bishop said in a ragged voice.
“I know,” I groaned. Gazing up at him, I said, “Please, don’t stop touching me.”
“Hmm, I like the sound of you begging.” His fingers began to work me over my panties, but I wanted more. I wantonly kicked my legs apart, spreading them as far as I could for him. Bishop read my mind by jerking my panties to the side and thrusting two fingers deep inside me.


“Oh yes!” I cried, moving my hips against his hand. At that point, I didn’t give two shits if anyone at the party could see or hear us. I just wanted to come.
Posted by Naughty and Nice Book Blog at 8:10 AM