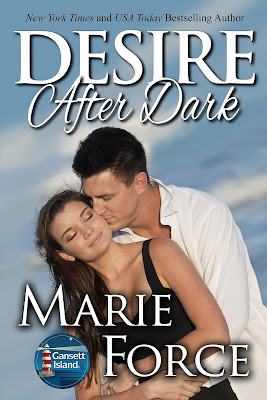 Tobias “Slim” Jackson has the perfect life as a pilot on Gansett Island in the summer and in Florida in the winter. He’s happiest when he’s in the air, or at least that was the case before last summer when he met Erin Barton, Gansett Island’s newest lighthouse keeper. Now he can’t seem to find his usual enthusiasm for flying, winter in the sunny South or anything that doesn’t include her.

Erin has been stuck on pause since she lost her twin brother. She’ll tell you herself that her life has been a hot mess since Toby died. After dropping out of law school, she’s flitted from one pointless job to another, existing rather than truly living. Then she comes to Gansett Island to take over as the new lighthouse keeper and meets Slim, who happens to share her beloved brother’s first name. That small coincidence is enough to convince Erin that she needs to spend more time with the dashing pilot—except for the fact that he’s spending the winter more than a thousand miles from her.

Now Slim’s come home to Gansett for the holidays and to hopefully pick up where he left off with Erin. He’s got twelve days before he’s due back in Florida to finish out the remainder of his winter obligations. A lot can happen in twelve days, but will it be enough to convince Erin that it’s time to start truly living again? Read Slim and Erin’s story and catch up with the rest of the Gansett Island cast in Desire After Dark! 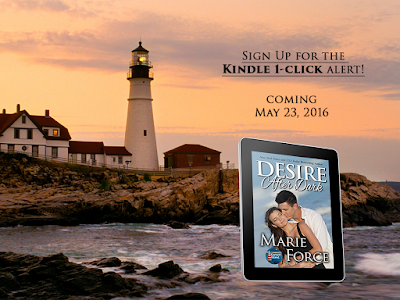 "Life is for the living."

Marie Force has done it again. Now you may all be thinking, 15 books? I can’t get into a series that long! I won’t lie because I said the exact same thing, but they are very quick reads and you’ll breeze through them in no time if you choose to. I would recommend you read them in order though, only because you’re kept wondering what happened. However if not, they can easily be read as standalones. If you choose to go the standalone route, Marie Force does a fabulous job recapping what happened in the latest events so you aren’t feeling too left out. With each book that comes out she seems to outdo the previous ones. I can’t seem to find a favorite character. Each book is unique in its own way and Desire After Dark was no different. My heart definitely broke for Erin in this book and the turmoil she was put through. I swooned over Slim on from the get go. Marie is great at making you go through the motions just as the characters would. So much that I couldn’t put the book down wondering of the outcome. I laughed with them, I cried, and my heart hurt where it needed to.

"At some point, she'd have to decide how far out of the shell she was willing to venture."

Erin Barton’s world ended when the news broke of her twin brother’s life ending during the 9/11 events. She was the last of every one to recover, I mean if you call it that. Erin was just going through the motions of life. She lost the will and motivation to live and do the things she loved since Toby’s death. All she could focus on was the life that was once. Needing a change of pace she moved to Gansett to become the island’s lighthouse keeper, where she fell into a routine and went through the motions there as well. Though everyone on the island was getting along happily; getting married, having babies, living a happy life. Everyone except her.  Jenny, her would be sister in law, has moved on as well, starting a new life and seems to be happy. All in which seems to set her back into a rut. Has that hamster wheel brain of hers thinking.

"I'm certain that i've waited a long time to feel this way about someone, there's no way i'm going to let you slip through my fingers.

Slim Jackson, the island’s pilot spends his summers in Gansett and his winters in Florida. He was never one to be in a committed relationship, never had a reason to be in one. Everyone on the island has drank the water and has fallen into the love spell, everyone except him. There was no need until he had to rescue Erin from the side of the road. Something drew him to Erin that night and he just didn't have it in himself to leave her. He needed to be the one to take care of her. Completely unlike him at all. That one night had changed everything. She was hurt and he didn’t dare leave her side until she was well enough. Slim took good care of her, even though they had just briefly met. Sensing her erect walls, they formed a strong friendship once he went off island to work in Florida connecting every so often.

"For a very long time my life has been spinning out of control. When I'm with you, the spinning stops."

Slim is back on the island for the holidays and against her better judgement, they decide to spend it together. Not knowing the inevitable, Erin has always kept herself distant when it comes to relationships. But with Slim he seems to be a game changer. She feels extremely comfortable with him, more than ever. He senses when she is distressed sometimes even before herself, offering comfort to her at just the right times. I fell hard for Slim in this book, it’s kind of hard not to. He’s so in tuned to Erin, her feelings and her needs and he doesn’t pressure her into anything. Erin still has her fears of the past holding her back from being happy, but slowly Slim is knocking back some of those walls down.

"The thought of giving someone that much power over me... it's frightening."

One of Erin’s biggest fears is flying and that’s one of his biggest loves. Will she push him away because of her fears? Or will he get to her before its too late to ruin it? Will Erin let her fears ruin her chance of happiness? Can Slim continue to be patient for Erin and help her work through her troubles? Will they be able to work through everything? Or will the past win? Can Erin have her happy ever after? Can Slim fight for his happiness? Or will it be too much to handle? Can love conquer them all?

"I'm not numb anymore. Not like I was . But i still don't know if I have what it takes to do something like this, because I haven't tried since then."

I truly loved Slim’s character in this book. He is the sweetest and the most patient person out there, and when needed he can be rough. He senses exactly what Erin needs and gives it to her. I believe he truly as sent to Erin as a gift from Toby. He was made for her. Erin struggled a lot on her own, but when she was with Slim she found her strength, it’s like he made her a stronger person. You could tell that she truly needed him. I kept rooting for her because she truly deserved to be happy. You still get everyone else in this book. They’re all still there cracking you up as always. Mac and Maddie, the rest of the McCarthy’s and the Gansett gang. They definitely kicked up their antics a notch here though, had me dying. I love that Marie includes them in the story to update you on their lives, but she doesn’t overwhelm you with their stories to overtake the main story line either. I can’t wait to see what she comes up with next with Mallory's book. I don’t think I’ll ever get tired of the Gansett Gang. Definitely keep them coming.

This review was done by Jenn. I received an advanced copy  for my honest review.
Posted by Naughty and Nice Book Blog at 9:00 AM