YOU'LL THINK OF ME 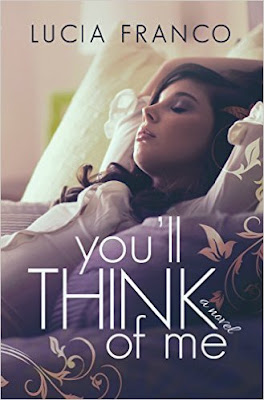 Luke Jackson. With his thick southern drawl and seductive charm, Luke is the country boy everyone adores. He has his future mapped out, but his plans with Olivia are suddenly derailed when she makes a decision that blindsides him, changing the path they both envisioned. As Luke struggles to keep everything in check during a difficult time in his life, he must put his trust in the one person who broke it to begin with. The last time they saw each other, Olivia busted his heart wide open, turning him into the man he is today. When Olivia returns to her roots, just like Luke said she would, he is shocked for more reasons than one. Nine years have passed since they've seen each other, and when their roads collide unexpectedly, Luke can only push his worry and misgivings away for so long. Things are different now—they are strangers—and the rope that once bound Olivia's heart to South Fork, Georgia is pulling her back in, forcing her to remember how it used to be all those years ago.
AMAZON BUY LINK

“Songs tell a story that I want to know more about, their sorrows spoken through lyrics that cannot be said in person.”

Olivia and Luke started off as best friends then one day their relationship easily progressed to something more. They did practically everything together. Luke was the escape Olivia needed. His family was the family Olivia never had, the family she always wanted. She has never felt more wanted than those moments she spent with them. Luke provided the safety that Olivia needed. Their love for one another was real, unbreakable. It was as if nothing could tear them apart. Everyone could see the love Luke and Olivia had for one another.

“Luke had been her best friend, confidant, her shoulder to lean on, her everything for years. He gave her security when she felt lost.”

Olivia has bigger dreams than staying in South Fork. Her childhood has always wanted her wanting more for herself. Not someone who would settle, she wanted to see more of the world. Luke was never going to leave his family behind. He was a family boy and South Fork was his home. If Livy loved him she would stay with him too. Livy has always wanted to pursue med school. The idea of going to New York was her ticket out and she knew Luke would not approve. Unfortunately to pursue her dream she needed to go behind Luke’s back.  The decision to go to New York would be the driving wedge between the two of them.

“Listen to the music, it tells a story.”

I loved Livy’s character. She’s independent, strong willed and very goal driven. We don’t see that very much in a heroin. She won’t let Luke stand in the way of her dreams. She knows what she wants and she goes for it even if it means getting her heart stomped on.
Nine years later, Livy is the doctor she has always wanted to be and Luke is the singer she has always envisioned he would become. And Livy has made her way back to the south. Both doing what they love, they will eventually cross paths again, but not all in good terms.

Time has definitely passed between them. Much has happened. Not a day has gone by that they have thought about one another. They both long for the past. But yet Livy has moved on. They both regret the past and letting each other walk away that day. Although Livy is with someone else, Luke and Livy keep finding their way back to one another. It’s like they still have that magnetic pull that brings them back to one another. They keep fighting it because what they had is in the past. They don’t know how to behave with one another in the present. They never really had the closure they needed. They simply just left and seeing one another after all this time has brought back certain feelings. Feelings neither knows how to deal with.

“My music. The songs I sing. All I have to do is think of you when I’m stuck and it just flow from the tips of my fingers.”

Can they make their way back to each other?? Or is it too late? Will they get the closure they need? Can Luke and Livy at least be friends with one another? How will her relationship with Luke affect her new relationship now? Will she make the same mistake with him and keep things from him too? Or will Luke and Livy prevail in the end?

This was a cute, quick read for me. Luke and Olivia were both equally stubborn individuals and neither one of them wanted to back down from one another. Which I think is why they were put in the predicament they were in, in the first place. I think both of their characteristics are similar, strong, smart, stubborn and very goal oriented. They both know what they want and won’t back down on anything. That’s what I love about them. But there were so many times I kept yelling at them to just stop and give it already, enough being stubborn LOL. They wouldn’t have been where they were at the end if they didn’t stick to their goals though. Luke wouldn’t be a singer and Olivia wouldn’t be a doctor. And it is definite that without a doubt that their love for each other has not lessened throughout the years, if anything, it has grown stronger.

HOLD ON TO ME 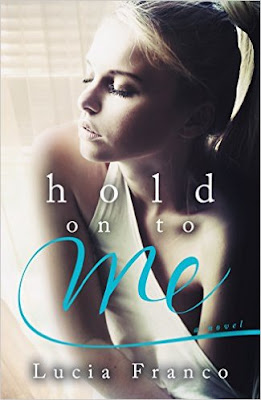 John Jackson. He’s a sweet talking Georgia boy, rough around the edges with an irresistible smile. John sets his sights on the new girl, determined to show her what his small town is about. But she isn’t as accepting as he thought and she rejects him at every turn. The beauty and boldness of Alyssa Winters stirs John’s blood. She quickly works her way under his skin and becomes a constant in his life – his best friend, his other half. As the attraction between the two friends grows, John wants more. She pushes, he pulls. When one reckless night of fun wreaks havoc on John, Alyssa risks it all to ease his pain, giving him the one thing he desires most...her. But John’s sadness runs too deep, the damage, irreparable. He runs, she falls. John must work to prove himself. Despite everything, Alyssa is the one person he doesn't want to live without. The stakes are high, and he’s willing to bet it all. Even if it means he’s left to suffer alone.

When I first caught a glimpse of John in Luke’s book, I knew I needed more of him. There was a reason why he was so troubled and angry at the world. I needed him to have his story and I’m glad he did.

This is a powerful and emotional book that put my emotions in a tailspin. I was able to feel every single one of the emotions the author was trying to put across. I felt bad for them as they were going through it. This is a type of book you must read yourself in order to get the real feel of the story.

John Jackson had a great life. Loving parents, his brother, close friends and popular at school and excelled in sports. What more could he ask for? When he crosses paths with Alyssa Winters, he knows just what he wants and he wants her. Her life is much different from his. She’s the new girl in town, coming from the city life, not used to the country life at all. With no father in her life and an absentee mother who resents her most of the, she is practically on her own. Upon his first meeting with her, John is captivated by her and wants to get to know her. She agrees to hang out with him but instantly shuts down any of his advances sticking him in the friend column.

“No one is ever really prepared for love, but it secretly cultivates around you and pulls you in when you least expect it and latches on.”

You instantly see that John and Alyssa have form some kind of connection, but Alyssa has put so many walls up it will be hard for John to break through them. She wants to progress her relationship with him, but her fears are holding her back. They do everything together. Even progressing into the “friends with benefits” category. As cocky as John comes off to be, he really does care for Alyssa, he is always his first priority. Alyssa is just trying to survive and do things on her own. I love that’s she’s trying to be very independent and not rely on anyone. But John always takes no for an answer and tries to weasel his way in. But when tragedy strikes, it throws everything into a whirlwind. Alyssa tries to be there for John but anger and regret consume him. When things are said out of hurt and anger, one big mistake occurs, it creates a much bigger situation that can’t be taken back. It will be the demise of them all.

“You made me feel so at ease, like I was worth having around. I felt wanted for once because of you.”

What follows will be a heartbreaking story of John picking himself from the ground and realizing that life isn’t over. He needs to fight to make things right and it starts now. He needs to fight if he wants Alyssa back. We also see the struggles of how Alyssa deals with the mistake created and what occurs.

“As much as she tried to fight her chemistry with John, it was hard.”

Will John and Alyssa be able to find their way back to each other? Or will that be the end for them? Will they find their happy ever after?

Lucia does a fantastic job with this book. I absolutely fell in love with John and his cockiness. You just can’t help it. This book truly shows that there are consequences for everything you do and you need to own up to it. That’s exactly what both John and Alyssa had to go through. They went through so many hoops and obstacles based off of the decisions they both made. But they owned up to them, whether they liked it or not. They weren’t always strong, but in the end they had to do what they did to survive in this cruel world. While reading this book, I definitely felt grateful for the things I have in my life.

Both reviews were done by Jenn.
I received an advanced copy for my honest reviews.

Lucia Franco currently resides in sunny South Florida with her husband and two boys. When she's not hard at work on her next novel, you can find her relaxing with her toes in the sand at a nearby beach.
Posted by Naughty and Nice Book Blog at 9:32 AM