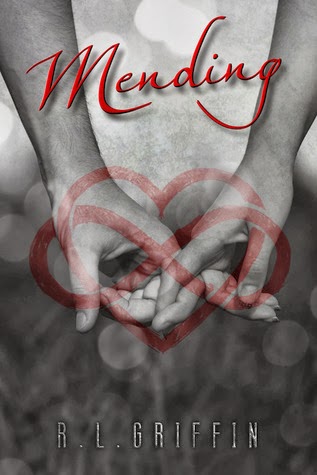 Free short that will describe from the end of Seamless to the Epilogue. I will release it as soon as Tension and Seamless get 100 reviews on Amazon. Go post your review NOW!


“I ran because I was trying to protect him, but I’m weak, J. I need him. I can’t see my life without him.”

RL Griffin brings us another fantastic read with Mending, a novella. She never fails to take me into the story and makes me feel the emotions each of the characters are going through. She just has this way to captivate me somehow and has a way to make me cry, so keep some tissues handy. It defiantly is going to be an emotional one.

“You are everything to me. There is nothing else. If it’s not you it’s nothing.”~ Stella

This story fills in some of the gaps from when Stella left George in Seamless. It answered some of the missing pieces that I wondered what happened. Stella felt like she had no other choice but to run. Run as far as she could. The man she once loved, the man who caused her life hell, was shot right before her and her life crumbled. She hit rock bottom for the millionth time and this time she didn’t know if she could recover. George had already been through so much because of her, and by being with her, she couldn’t put him through anymore. She thought it was best to leave him. He deserved someone better than her. But when she ran from George, she ruined everything that they had.

“You haven’t done anything but love this broken, fucked up girl, and it was too much. I understand that. I always have.”~ Stella

When Stella realized that she needed George back in her life, it was too late. George didn’t want to talk to her, nor see her. Stella tried all that she could to get in contact with him and she wasn’t giving up on him. She needed to try and get her life back on track. She didn’t have George or Patrick when she needed them the most. When the impossible happened, she felt like she was facing the world all alone. Stella shows her determination and strength in fighting to keep this baby alive, when the doctors all said she would eventually lose it, all while trying to earn George’s trust back. She could not lose another person in her life, she just couldn’t. The pregnancy came to be a shock to everyone, but it’s exactly that she and George needed to get their relationship back on the mend.

“I guess that’s what we needed. A miracle.” ~ George

Stella has been through so much in this series. But I think this one proves to be the toughest one yet. She knows what she wants, and she ruined it all and she needs to fight the biggest fight of her life to win it all back. Given their little miracle, they are both able to experience the ups and downs of the pregnancy experience, praying for a miracle in the end with no complications. Stella truly deserves her happy ever after. Stella and George both do. RL does a wonderful job allowing us to experience that right with them. It’s a little hard to let them go now that this series is over because it’s like they’ve become part of my family and I don’t want it to end. But she gives us a glimpse of Patrick and I can’t wait to see what his book will be all about!

Millie's POV- This is after Seamless for people who haven't read it...

She jumped off the train that went from the Russell Senate Office building into the basement of the Capitol, her heels clicking rhythmically on the marble floor. She was late and her lipstick was smeared. Millie tucked her newly dyed deep chestnut hair behind one ear. The Democratic caucus had invited the Department of Education to come to a meeting regarding the reauthorization of the Individuals with Disabilities Act. What she hoped they'd be discussing were the specific issues with the language to cut down on the litigation surrounding special education and giving more money to local districts to enable them to provide the services students need. However, it was more likely it would turn into a session of bashing teachers and school districts. This was a debate the Department of Education didn't want to engage in.


Millie went up the staff elevators and smiled at some interns she recognized from Senator Miller's office. She self consciously wiped her finger around her mouth. She didn't even have a mirror in her purse. She'd just almost had sex with a junior senator from Alabama who'd recently separated from his wife. That's right, she's was whoring around trying to get over the fact her boyfriend for almost two years was in love with her best friend. This feeling was not new, but very unwelcome. When she was twenty-one she'd walked in on her boyfriend fucking someone else, that'd been easier to get over because she was pretty sure that Patrick had resigned himself to settle for her. SETTLE FOR HER. That she just couldn't take. He must've thought she was a complete fucking idiot. Not to mention the fact that Stella was totally oblivious to him. He never made a move, but what guy acts like that toward a girl and not want to get into her pants?


When Stella had come back from the beach she'd just been a pile of her former self. Jamie being shot on her had almost done her in. If it wasn't for the baby, Millie was pretty sure Stella would've kept driving away from all of them, away from her life. Millie didn't think she blamed her, who could withstand all that Stella had been through. Millie didn't ask Stella about what happened at the beach, because she honestly didn't want to know. She didn't want to hear how Patrick broke down and told Stella how much he loved her. Millie didn't think she could handle it. So she didn't ask and focused on her friend, who needed her and who came to Millie, not Patrick. That gave her all she needed to know.


Lost in thought, she dropped one of her folders as she excited the elevator. She bent over to pick if up and noticed a breeze at her back and stood up straight immediately, the three female interns laughed softly as they passed her. Millie checked her cell, she was fucking late and her zipper was down on the back of her dress, she could feel it now. That stupid mother fucker didn't zip her dress up all the way. Her hands were full and she was still clicking away trying to think of how to solve her problem when a set of large, warm hands gently touched her back, slowing her running through the Capitol. Her zipper went up smoothly and the hands even fastened the clip at the top of the dress. Chills formed on her body as those hands grazed the base of her neck. She turned to thank whomever it was that had done her a enormous favor and had to grab onto him to stop from tripping backwards. Red hair, blue eyes and green bow tie. Her mouth fell open at the fact the Connor Donovan, Senator Donovan's son, had zipped her dress.


"Thank you so much," she breathed once she collected herself.


"No problem," he smiled a crooked smile that she bet got half of the Hill to drop their panties, the other half were straight men.


Not knowing what to say, she twirled back around and continued in rapid fire pace to the caucus room. She heard his steps behind her, but just assumed he was going this way for his purposes, he was a big lobbyist on the Hill.


"I didn't get your name," he said from behind her.


"Oh," she slowed a bit. "Camille. I'm sorry, I really do appreciate your help. I mean how embarrassing is that?  But I'm late for a meeting and…"


"You have something," Parker said pulling her by her bicep into him and used his thumb to wipe something off her face, near her lower lip. His eyes bore into her and his smile was mischievous.


She was mortified and opened the doors to caucus room and made her way into the back of the room until her portion of the meeting. Connor followed her in and sat behind her. Millie was wiping around her mouth again, hoping there were no remnants of her lack of judgment.


She felt her hair move and his lips on her ear. His breath hot on her neck. "I got it all. I promise."


She would die of mortification.


"If you let me kiss you like that, I promise I will have a mirror in my back pocket," he whispered in her ear.


Laughter escaped her lips and she slapped her hand over her mouth.


"Also, I would never let you walk away from me without zipping her dress."


His voice sent a humming through her body. When she turned to respond they were only an inch apart and she caught herself staring at his lips. "I'll try to remember that," she quipped.

a Rafflecopter giveaway
Posted by Naughty and Nice Book Blog at 10:58 AM